The Reserve Bank Monetary Policy Committee has had an unchanged membership for its life so far, but tomorrow’s decision (and MPS) will be the last for this group. The Deputy Governor Geoff Bascand moves on in January, the Chief Economist moves out in February, and the terms of two externals expire shortly thereafter (although one or both could be reappointed). On those changes, interest.co.nz had an interesting article yesterday which more or less confirms that the chief economist had been restructured out as the Orr permanent-revolution (at least until he finds a suitable mix of lackeys) rolls on, reports on Orr openly insulting a fellow speaker at an event they were both speaking at, even as it ends up (seemingly) trying to retain at least a little RB favour/access with this line

Nonetheless, Orr is community-minded and isn’t afraid to stand up to those with corporate interests, who spinelessly try to discredit their regulator by attacking his personality.

In days gone by surely a sub-editor might have questioned the unqualified unsupported used of a term like “spinelessly”, especially when it is well known that Orr has been on record abusing people who criticise his approach or policies, including those with no “corporate interests” whatever.

Critical as I am of Orr (in particular) and the upper levels of the Bank more generally, I continue to more or less expect them to do “the right thing” on basic monetary policy stuff. It won’t be well done, it won’t be well-communicated, it won’t typically be supported by robust or insightful analysis, but this group don’t seem like the sort who are going to wilfully let core inflation get away on them. That must be a pretty common view, because although shorter-term inflation expectations (measured in the Bank’s survey of semi-experts etc) have increased markedly, five-year ahead expectations are little changed from where they were 3 or 4 years ago.

Were I in their shoes I would increase the OCR by 50 basis points tomorrow. There are really two reasons for that. The first is simple: there is not another review until February (because a few years ago the Bank rashly decided to give its monetary policy function a long summer holiday). With two reviews during that period perhaps it might have been okay to have done two 25 point moves (not that there is any particular problem with 50 point changes, especially when the possibility is openly being canvassed). But there is also the underlying macro situation. Core inflation took the Bank by surprise a lot over recent months, and if it is not now outside the 1 to 3 per cent target range, neither is such an outcome that should be contemplated lightly. And inflation expectations measures have moved up a lot. There is no guarantee that the numbers reported in surveys are actually the numbers firms and households have in mind when they themselves are transacting, but it wouldn’t be wise to jump to the conclusion otherwise. Here is the two year measure.

The level of expectations is back to around the peaks in the 00s (prior to that the target itself was lower) and the increase over the last 12-18 months has been sharp. Early last year we needed lower nominal interest rates just to stop real rates rising. Now, we need rising nominal rates to stop short-term real rates falling – such falls would be undesirable in a climate of full employment and high/rising core inflation. One of the basic precepts of inflation control is that, all else equal, short-term rates need to be increased (decreased) as least as much as any rise (fall) in inflation expectations. Since even a 50 basis point increase tomorrow would only take the OCR back to where it was at the start of last year, and on almost every measure expectations are materially higher than they were then – and core inflation itself is much higher – the prudent response would be a substantial increase in the OCR now.

And I say that as someone who is quite open-minded about where the OCR gets to next year and beyond. As a matter of general principle I don’t think forecasting beyond the next quarter or two makes much sense, and the pandemic uncertainties here and abroad only compound that (we still have no firm take on output losses in the September quarter and it will be December next week). But not all the straws in the wind necessarily point in the direction of repeated or substantial further increases. It isn’t obvious that the wider global environment is persistently different – in ways that would support higher neutral real interest rates – than it was two years ago (and recall that global policy rates were being cut in 2019), fiscal policy (here and abroad) seems more likely to be a contractionary influence (fiscal impulse) than an expansionary one over the next few years, and for New Zealand reopening borders could still be more of a drag on domestic demand than a boost, at least for as long as it is very difficult for Chinese tourists to travel. Government policy generally is hardly set to promote a sustained acceleration in productivity growth (and associated investment) – if anything, we will be lucky to avoid a worsening set of outcomes. And if you believe in housing wealth effects – I don’t at an aggregate level – there could be some drag from that source next year. And so on. 50 points now and then approach each review next year with a genuinely open mind seems to me the most sensible, and prudent, approach.

For all the talk of how low interest rates are at present, it is worth remembering that New Zealand rates remain high by international (advanced country) standards. Very long-term interest rates – one silver lining to the higher government debt is that we now have a few more indicators – are the best place to look, abstracting from short-term cyclical effects.

As of yesterday, our 30 year government bond rate was 2.93 per cent. The comparable US rate was 1.91 per cent. The inflation targets in the two countries are all-but identical (over horizons like that) and the US has a far worse public debt position – actual and outlook than New Zealand. And the US is, by advanced country standards quite a high interest rate country: the German government 30 year bond yield is about 0.0%.

These are really large differences, which have implications for how we think about the exchange rate: expected risk-adjusted returns tend to equalise across countries through the exchange rate, and whether the difference is 100 basis points (on a 30 year nominal bond) or 140 basis points (on a 20 year indexed bond) they point towards an overvaluation relative to the USD of perhaps 30 per cent, and something even larger relative to the euro. You’ll recall that New Zealand exports and imports as a share of GDP have been increasingly sluggish this century. There is a connection.

The bond yield differences have been around for a long time and show little sign of closing on any sort of sustained basis. You might think there was some evidence to the contrary for the US, at least if you look just at the most-common comparison, that of 10 year nominal bond rates. 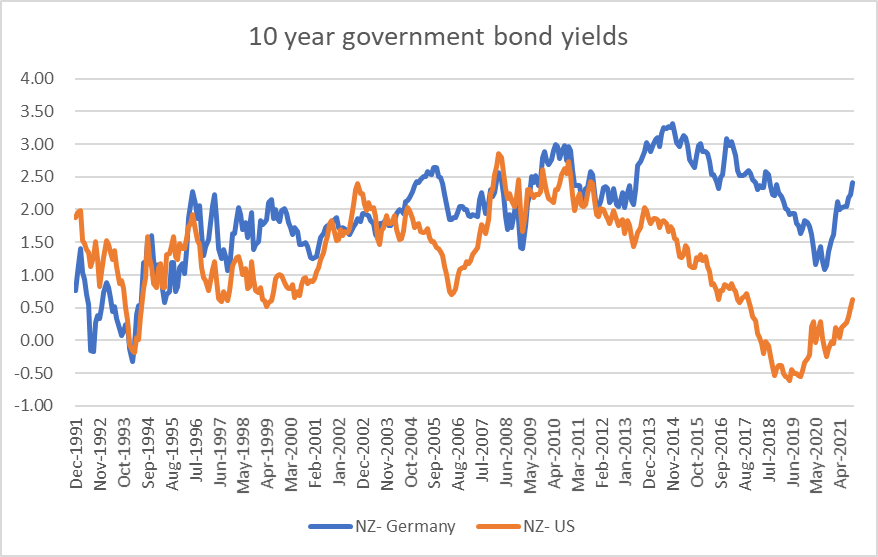 But for some years now both countries have had 20 year inflation-indexed bonds (the US numbers are the US 20 year constant-maturity yield, and for New Zealand the closest of the 2035 and 2040 bond yields). 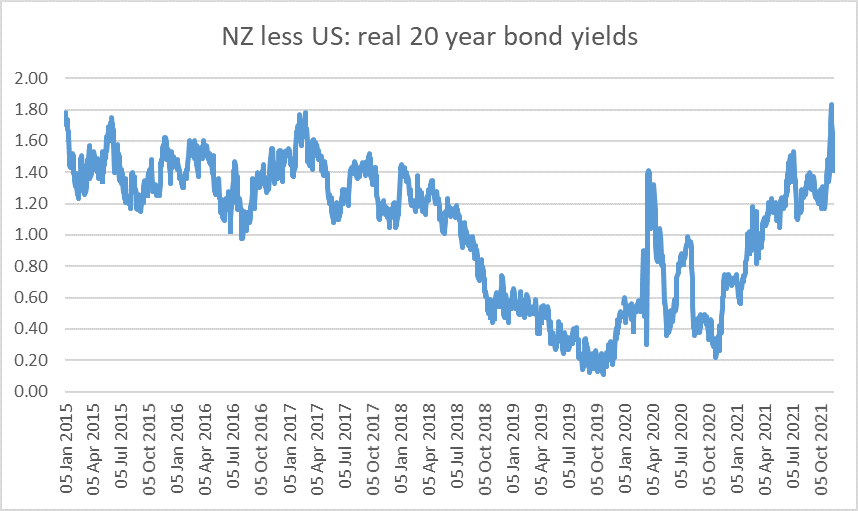 Our rates did look to be converging on those of the US for a time – by the time we went into Covid US short-term rates were much higher than those in New Zealand (and even more so relative to most other advanced economies). But as emerge, the gap now seems to be right back to where it was (the last observation on the chart is a spread of 1.41 percentage points). It is a really large difference, and not at all out of line with differences (New Zealand rates higher) than we’ve experienced over most of the last 30 years.

These are differences that cannot reflect default risk or (credibly) inflation risk. They seem to reflect differences – actual and expected – in the savings/investment pressures in the two economies, which in turn explain the respective neutral interest rates (ie rates consistent with inflation being at target while the economy is fully employed).

Finally, a chart that intrigued me when I generated it, but in which I don’t place much confidence. One advantage of a wider range of government bonds is that one can back out of the resulting yield curve implied forward interest rates. Thus, with 2035 and 2040 indexed bonds, one can back out the implied 5 year real rate for the period between 2035 and 2040 (ie far into the future, and not influenced – in principle – by current cyclical pressures, or even current members of the MPC or current government ministers).

Yields on both bonds look very low at present (0.56 per cent and 0.71 per cent yesterday), but what about that implied five year forward rate? Here is that chart for the last few years.

Earlier in the year it might have looked as though the “new normal” might have been expected to involve much higher real rates in the medium-term future. But as things stand right now, the implied forward rate is just a bit lower than it was in early 2020. I’m reluctant to put very much weight on this – thin market, quite sensitive to small changes in individual 2035 and 2040 yields etc – but for what it is worth – and for now – markets seem to be pricing a medium-term return to the sorts of real interest rates (strangely low, in many ways) we had a couple of years ago.

Markets have, of course, been known to be wrong (often), but I don’t feel blessed with the insight to offer a view on whether this implied view is right or wrong, let alone whether if it were to be wrong, in which direction any error might be. Used as we are to positive real interest rates, there is nothing natural or inevitable about them.