I was tempted to head-up this belated MPS post “Je ne regrette rien”, as that – I regret nothing (about last year’s monetary policy) – was what Orr told yesterday’s press conference as he was getting rattled towards the end. He should regret quite a bit – notably the $5.7 billion of taxpayer losses on the LSAP, and the ongoing huge risks (neither were points he was willing to engage on, whether in the MPS, in the press conference, or at FEC this morning – indeed he actively played distraction). But that isn’t really where I want to focus my thoughts on the Monetary Policy Statement.

I thought the MPC should have raised the OCR by 50 points. The MPC disagreed, and moved by only 25 points. That is their choice of course, but – once again – I was struck by just how lacking and inadequate the supporting analysis and argumentation were, on their own terms (ie relative to their own published forecasts). No informed reader – and there won’t be many other readers of their 56 pages – will have come away feeling persuaded by the insights and analysis the Bank’s big team of macroeconomists had generated. There was nothing new or insightful, at least that I could see. And much that wasn’t convincing.

As I’ve noted on various previous occasions, when there are big starting point surprises, surely we expect to hear from the MPC (a) why they think they got things wrong, and (b) what that mistake – and mistakes are inevitable in such areas – has taught them about how the economy is behaving and how, if at all, it changes their view about the road ahead. But once again, there was none of that (in fact, in the press conference again played distraction suggesting that the surprise was the lockdowns after August, whereas the September quarter unemployment and (core) inflation surprises really had nothing much to do with those lockdowns (which will, of course, have a big impact on September and December GDP). Their August projections/discussion had suggested something fairly unproblematic on core inflation, and instead they suddenly found themselves with outcomes near the very top of the range, and so on.

Their discussion of inflation expectations also lacked structure, consistency, and any sense of authority. In the minutes of the MPC meeting we were told

The message seems to be one of nothing to worry about at all. But even the story is misleading, at best. It is certainly true that year-ahead survey measures of inflation expectations seem to be very driven by fluctuations in headline inflation, but here is the two year ahead measure (from the Bank’s own survey) lined up against their (historically) preferred – and most stable – measure of core inflation. Inflation expectations – over almost 30 years – have typically fluctuated through materially narrower ranges than core inflation itself. The exception – potentially important exception – has been the last two years. If anything, the two year ahead expectation could be disconcertingly high already, given the extent of the rise in core inflation itself.

Then there is that claim that all is fine because long-term inflation expectations haven’t changed much. The Bank asks about expectations five and ten years ahead, and outcomes are not far from 2 per cent – as you would hope, given the target, but only because respondents presumably expect the MPC to act sufficiently aggressive to keep inflation near the centre of the target range. If those five and ten year expectations started moving up sharply there really would be cause for concern, but the fact they are still near 2 per cent shouldn’t be telling MPC anything about the appropriate policy stance now.

At the press conference one offshore questioner asked the Governor about the MPC’s response to the big increase in inflation expectations, given the Risk Appetite Statement included in the MPC in which they asserted that “they had a low appetite for policies or decisions that could cause inflation expectations to become unanchored”. This was greeted with a glib and dismissive response from Orr along the lines of “we have reacted and raised the OCR”, not even engaging with the fact that (for example) two year ahead expectations are now a full per cent higher than they were in February, and yet the OCR has been increased by only 50 basis points over that time, there isn’t another review until February, and the MPC has stated that they prefer to move in 25 point bites. At best, it will be the end of March before the OCR will have been raised by 100 basis points, but even that won’t have raised real interest rates at all relative to the start of this year (let alone relative to the start of last year). Perhaps expectations will have moved even higher – outside the target range in the meantime. Perhaps not, but surely we should have expected a more thoughtful nuanced and engaged treatment of the issues and risks? Core inflation has, after all, already increased a lot (and – which we will come to – even they seem to expect it to increase further).

Similarly, we are told that the Bank’s projections have the OCR rising to above (the Bank’s estimate of) the neutral OCR. They seem to base that on this portrayal of neutral. 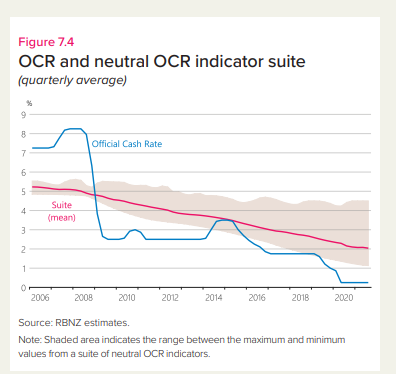 But this chart seems not to have taken any account at all of a jump in inflation expectations. The Governor said they mattered – and that the Bank had responded – but there is no sign they do so in this estimate of neutral. Given the Bank’s inflation forecasts it seems unlikely that medium-term inflation expectations will be dropping any time soon, and if those survey numbers are capturing something real, doesn’t that mean the OCR needs to go (quite a bit) higher than they might otherwise have thought. Now personally I’m very sceptical of the value of medium-term projections, but it is the Bank that uses them as a storytelling device and yet quite a material (and identifiable) part of the story seems to be have been left out.

And so it goes on. The best question I’ve heard about yesterday’s MPS was from a first year economics student, who wanted to know how the Bank could claim to be fulfilling its mandate when it projects that inflation next year will be 3.3 per cent. I haven’t seen any attention paid to what that number means. Recall that it is now November 2021. Nothing about the year to December 2022 has happened yet. So the Bank’s forecasts for inflation next year must be very close to a forecast of core inflation (they don’t know the inevitable one-off shocks – up or down – and they assume the exchange rate is fairly stable). Core inflation is currently about 2.7 per cent and the Bank is quite content to see it rise to 3.3 per cent – outside the target range. When a press conference questioner asked a similar question, she again got a dismissive (and obfuscatory answer). It might be one thing to take things slowly if the unemployment rate was still lingering high, but the Bank is quite open that at present the unemployment rate is below a sustainable level. So raising the OCR more and more quickly wouldn’t be kicking the economy into recession – the Governor’s claim – but would just get both dimensions of their dual mandate back towards desired levels sooner (and with less risk to those pesky inflation expectations). As it is, the Bank’s forecast for the unemployment rate in March 2022 is a tough lower than it was in the latest official release. This is an economy that – on their numbers – has been overheating, and they can’t even manage of Taylor principle scale of response, not even when the unemployment rate is – on their telling -unsustainably low. Perhaps there is a case to be made for their choice, but neither the MPC nor the Governor made it.

I could go on at some length on other matters, but just a few bullet points instead:

All in all, it was a fairly typically poor Reserve Bank performance, perhaps undershooting even my low expectations.  It was good that some questions were asked –  at the press conference and at FEC –  about the high turnover at the top of the Bank, even if Orr was allowed to get away much too easily with ludicrous claims about what a desirable place the Bank was to work, what an abundance of talent they had available etc etc.  It certainly wasn’t on display in this document.

(On the turnover question, one almost had to feel sorry for the Chief Economist who has been restructured out:  asked by MPs about what was going on Orr rashly talked about how Yuong Ha “has chosen to go into a far more challenging role. What are you going to be doing?”  There was a noticeable, whereupon Ha lamely responded “Coaching my son’s cricket team. Taking a break”.   Orr seemed to display all the sensitivity and personnel management skill of, say, a Judith Collins.)