This isn’t going to be one of my usual lengthy post-MPS posts. I really just wanted to make one point about the disconnect yesterday between the words and the actions of the Governor and the MPC.

There were more than a few good words and phrases from the Governor, and even a few in the document itself. There was, for example, the reiteration of the MPC’s so-called “least regrets” framework, under which for now they say they’d rather run the risk of inflation being a bit high than run the risk that they (continue to) undershoot the target the government has laid down for them. And there was the Governor’s response to Stuff’s Thomas Coughlan about whether the Bank’s new mandate – the employment bits – had made any difference to monetary policy decisionmaking this year: he said not, since both unemployment and inflation indicators/outlooks had pointed to the need for much easier monetary policy, even highlighting the risks of inflation expectations settling below target. On Radio New Zealand this morning, Orr even allowed himself to say yes when asked if monetary policy would do “whatever it takes” to lean against a cyclical economic slump.

All of which sounded great. It was pretty much standard inflation-targeting cyclical stabilisation stuff, especially when overlaid on a background of the last decade when – as the Governor put it – central banks hadn’t demonstrated such a good track record in getting inflation back up to the target (recall that in our case in particular that target is set by elected governments, and that set by the current government is much the same as that of their predecessors.

But what do the MPC’s forecasts show? Recall that these published forecasts include all the expected effects of the monetary policy stance announced yesterday (although perhaps not the proposed new LVR controls), including the new Funding for Lending scheme (which, as the Governor noted, the Bank thinks market pricing for retail deposits has already anticipated).

Here are their CPI projections. 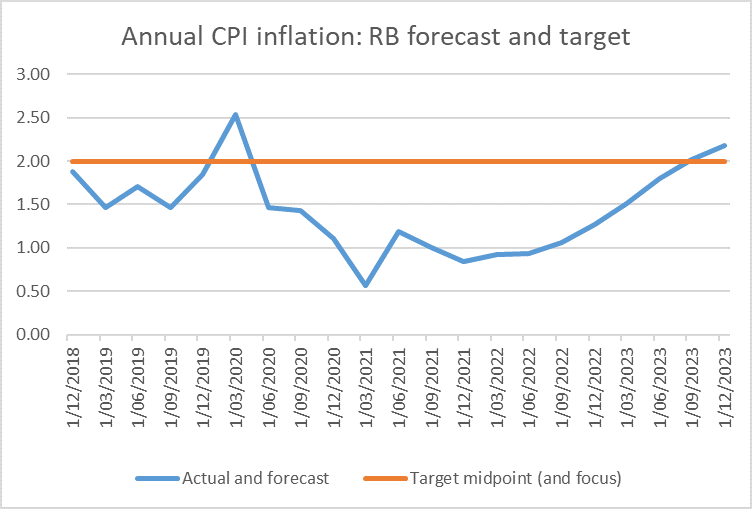 Inflation does not get back above 1 per cent – the very bottom of the target range – for two more years, at which point it will have been more than 2.5 years since the Covid-related severe downturn got underway. It is three years from now until inflation is forecast to get back to 2 per cent.

And then there are inflation expectations. In a distinct step forward yesterday there was quite a bit of discussion of inflation expectations in yesterday’s MPS, including in the minutes of the MPC meeting. At least some members must be getting quite worried, even if staff gallantly try to play down the issue by refusing to engage with direct estimates of breakeven inflation from the government (indexed and conventional) bond market.

They included this chart in the document 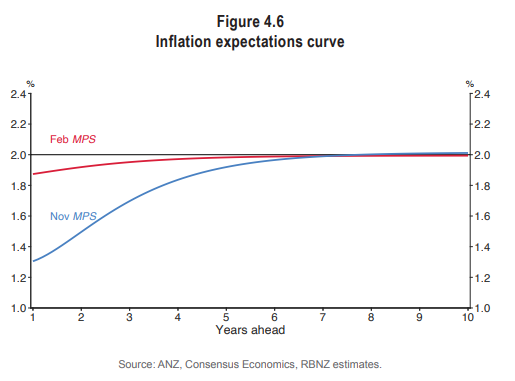 And yet what did they do in response to this outlook? Nothing. Simply nothing. And in the process pushed the exchange rate – usually a key adjustment mechanism in New Zealand downturns – even further above the level it was, whether yesterday morning or at the start of the year.

Instead they are content with rhetoric (sometimes quite good rhetoric) and handwaving, and throwing around big dollops of money in ways that make little useful difference (and whatever good effects the Bank thinks those tools are having are already baked into the forecasts). Oh, and of course no serious accountability either: it is now 19 months into the new MPC and not one of the external members – the ones who don’t work directly for the Governor – has given a speech or a serious interview.

Oh, and remaining wedded to that bizarre commitment made in March – before the severity of the crisis was apparent to them – not to touch the OCR for a year, come what may.

(Of course, some readers may want to defend the RB on the basis that they – readers – don’t believe a negative OCR could help. There is an argument to that effect – I’m among those who resolutely disagree – but the point here is that it is not an argument the Bank itself is relying on. They claim monetary policy is still capable of doing useful and important stabilising stuff….and yet won’t even cut the OCR to zero, let alone negative, despite (a) such weak foerecasts, and (b) averring that a lower OCR would do good stuff.)