Skip to content
HomeWages have risen faster than output per hour

I have a few other things on my plate today, but I thought I’d just share this update to a chart I’ve run before, showing wage growth (using the LCI analytical unadjusted measure for the private sector) relative to growth in nominal GDP per hour worked.

When the line is moving upwards, private sector wage rates have been rising faster than nominal GDP per hour worked.  Growth in nominal GDP per hour work can be loosely conceptualised as some measure of the economy’s capacity to pay (average overall domestic production is rising that rapidly, leaving to be resolved the extent to which those gains –  whether from the terms of trade, productivity, or just general inflation –  end up going to labour or capital).

The reason the chart has tantalised me since I first stumbled across the idea of constructing it a couple of years ago, is (of course) that private sector wages in New Zealand do seem to have been rising faster than “the capacity of the economy to pay”.  It has happened in fits and starts, and there is a fair bit of noise in the data, but the trend since about 2001 has been pretty clearly upwards.   (The wages data released this morning give us June quarter numbers for the numerator, and hours worked data, and here I’ve assumed nominal GDP rose 1 per cent in the June quarter.)   The cumulative difference over time –  around 15 per cent now –  is not small.

As a reminder, here is the comparable chart for Australia, which I included in a post last week. 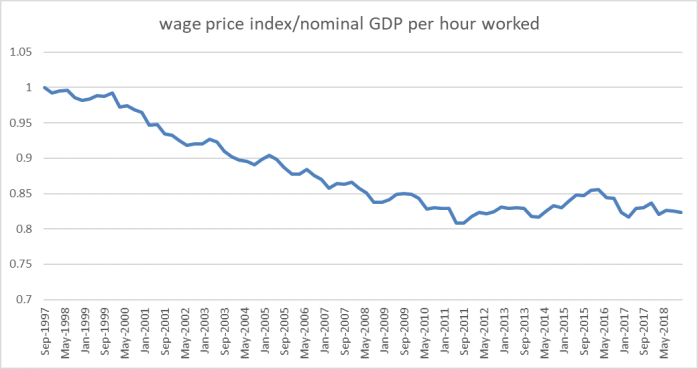 The New Zealand numbers do not, repeat not, suggest that people are in some sense overpaid in New Zealand.  Mostly, wage rates are a market outcome (firms and employees, and the respective opportunities etc), and although policy initiatives like pay equity settlements and large minimum wage increases have boosted the New Zealand line in the last few years, those specific measures don’t explain the longer-term trend to anything like the full extent.

The New Zealand numbers also don’t suggest that New Zealand workers are doing particularly well in an absolute sense.  They aren’t.   New Zealand incomes lag well behind those in leading advanced countries.  But although wages can and do wander away from aggregate economywide productivity for a time, in the longer-term only productivity growth can really underpin a closing of those wage/income gaps.  As I’ve highlighted here before, it would take productivity increases of about 60 per cent here to match the leading OECD bunch.  And we’ve had virtually no productivity growth at all in recent years.   All the data is saying is that workers haven’t done too badly given a badly-performing economy: little or no productivity growth and fairly stable terms of trade.

But most people would still have been better off had we actually managed decent productivity growth, and if the economy were not so badly skewed as to have a substantially overvalued exchange rate and, in association with that, non-tradables sectors doing well, but tradables sectors as a whole typically doing poorly.   Reasonably strong domestic demand can result in high demand for labour, and higher wage rates.  But the associated overvalued real exchange rate deters (crowds out) the sort of investment in internationally competitive industries that might have allowed real productivity gains to have been achieved.

The orange line is the average for the last 15 years:  far higher than for any sustained period in the history of the series, even as our productivity performance has remained pretty woeful.  And, of course, at the end of the period the series is above even that fifteen-year average.

3 thoughts on “Wages have risen faster than output per hour”