It is a serious question.  MBIE’s immigration data are pretty hopelessly poor –  not published in readily usable formats, not seasonally adjusted etc.   The Migration Trends and Outlook publication for 2017/18 is still not available.  I know they have plans afoot to improve things, but it is past time they did: immigration, after all, being one of the major instruments of economic (and social) policy in New Zealand.

But from time to time, I have a look at what they do publish –  huge tables in small fonts, from which one has to transcribe numbers if you want to do anything with them.  And the other day I had a look at the latest residence approvals data, and was quite surprised by what I found.

This chart shows the number of people approved for residence in each June year.  The 2018/18 number is the annualised number based on September quarter actual data.

The “target” rate of approvals was around 47500 per annum for a long time, lowered slightly to something centred on 45000 per annum late in the previous government’s term.  As you can see, give or take 5000 or so people, they more or less meet that target. And so last year’s drop took me by surprise.  I didn’t make anything much of it then, when the numbers finally came to light: after all, announced policy hadn’t changed much, and perhaps it was just noise.

But the early data for the current year suggest something more than noise.  If the September quarter rate of approvals was kept up only about 33000 residence approvals would be granted in 2018/19.  Perhaps there is some seasonality in the series –  did I mention that MBIE don’t publish seasonally adjusted data, or make the raw data available in a form in which I could see for myself? –  but if not, it would represent quite an undershoot relative to the official target.

I don’t usually pay much attention to the nationality of those getting residence –  my arguments about immigration are mostly macroeconomic in nature, indifferent as to whether the migrants come from Bangalore, Birmingham, Brisbane or Beijing.  But as I’d been writing about the PRC and our political parties, out of curiosity I checked the residence approvals granted to people from the People’s Republic.  And finding those interesting, I looked a bit further. 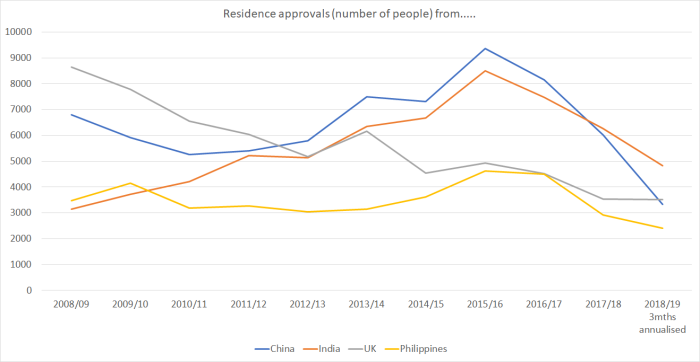 That (the blue line) is a staggering drop-off in approvals from China.   Again, perhaps there is some seasonality –  but it isn’t obvious why there should be, given that most residence visas are granted to people already in New Zealand, initially on other visas.

The falls in approvals from India and the Philippines are also pretty large.  And yet clearly the fall isn’t across the board. So far this year approvals from the UK are running at about the same (annualised) rate as last year (as were, more or less, when I checked, those from South Africa another significant source country, and those –  much fewer –  from Singapore and Taiwan).

I’m puzzled by what is going on.  I’d taken the new government at its word when it swore that it wasn’t changing the residence approvals target, but if not it looks as if something is going on that is markedly reducing the number of eligible people (especially from China and India) applying. (In another of the huge, not user-friendly, documents MBIE puts out, it looks as though there are also fewer applications in hand now than usual.) Perhaps it has something to do with the earlier wave of foreign students studying here, but although there has been a significant drop in numbers from India those from China haven’t changed much.  Perhaps there is something in the publicity around foreign investment restrictions –  which don’t of course apply to those who have residence?

I’m puzzled.  And, of course, I’ve spent years calling for a reduction in the residence approvals target, so in one sense I’m not unhappy to see the reduced numbers.  But I also strongly favour open and transparent policy, and there has been nothing announced suggesting that we should have been expecting –  or that the government was seeking –  such a large reduction in the number of residence approvals being granted.

If any officials or industry experts have informed insights on what is going on the comments section is open.

34 thoughts on “What’s happening with immigration?”