The Reserve Bank’s expectations survey results were released this afternoon.  The Bank itself will have had the results last week, and will have been able to take them into account in finalising tomorrow’s Monetary Policy Statement.

Mostly, only the inflation expectations numbers get reported.  They didn’t change materially, whether at a 1, 2, 5 or 10 year ahead horizon.   Perhaps that isn’t too surprising, but it is encouraging given the lift in the sectoral core inflation measure evident in the most recent CPI. 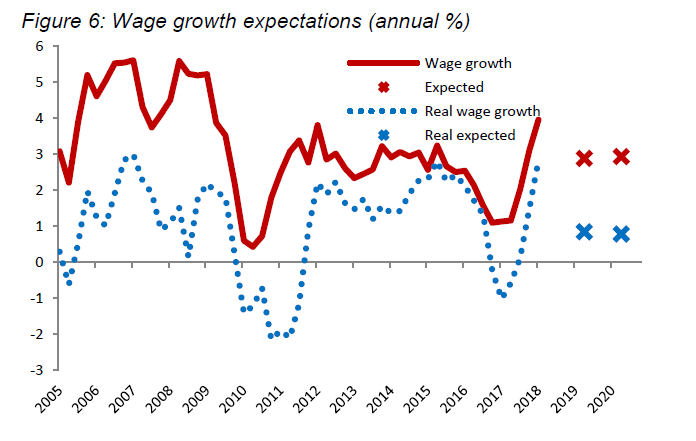 I was more interested in two other series.  In the first, the Bank asks respondents to indicate how tight they think monetary conditions are now, and how tight they expect them to be a year ahead.  Ever since 2011, the mean respondent has judged conditions to be easier than neutral –  despite which inflation has consistently undershot the target –  but what is somewhat interesting is how respondents expect things to change.

In this survey, there has been a bit of an increase in the proportion of respondents who expect monetary conditions to tighten over the coming year.

Those expectations still aren’t as strong as they were at the peak of the (misplaced) tightening fervour in 2014, but they aren’t far away now.    Quite why, or what has changed, is a bit of a mystery (noting the unchanged inflation expectations).  “Monetary conditions” isn’t further defined in the survey, so includes (implicitly) not just official interest rates, but the exchange rate, credit conditions or whatever the respondent has in mind.  Perhaps respondents are expecting credit conditions to tighten (further)?

Is that difference material?  Well, I had a look back over the history of the series.  If we go all the way back to 1996, there have only been three quarters when two year ahead growth expectations have been revised down by more than the fall this quarter.

(The quarters with large increases in expectations also come, as one might expect, just after these recessions.)

The fall in two-year ahead expectations this time is still a bit smaller than the falls in 1997 and 2008/09, but it doesn’t look like a result that should be lightly dismissed.  In one sense, people can say “oh, just consistent with the fall in business confidence measures”, but this survey isn’t just a sentiment indicator, but asks about specific macroeconomic aggregates.   And the fall isn’t just concentrated in one year ahead expectations (which actually fell less than the two year ahead expectation), suggesting that whatever is influencing respondents isn’t something they expect to dissipate quickly.

I’d be a bit rattled if I was the Reserve Bank.  It just adds to the sense that growth has probably slowed further already (beyond what is reported –  last official data was the March quarter and it is now August) and may have further to fall.  And respondents –  who include most of the economic forecasters –  don’t see much reason to think a significant rebound is likely any time soon.

Such expectations aren’t accurate predictions of what will happen two years hence –  partly because if things get bad, policy (including monetary policy) responds –  but large falls in the past have coincided with the two periods of worst economic outcomes in the last couple of decades.

(And readers of the Minister of Finance’s speech today won’t have found anything in it to instill much confidence in the sort of rebalancing  –  or stronger productivity growth in the medium term –  the Minister claims to be pursuing.  Strangely, the Minister continues to repeat the election campaign lines about how well the economy has done in recent years –  the economy that saw weakening per capita GDP growth, little or no productivity growth, weak business investment and a declining relative size of the tradables sector.)