My wife and son were watching the rugby test on Saturday evening but, not being overly interested in rugby, I started paying attention to the companies that were advertising at the ground.

All Blacks tests are one of the international showcases of New Zealand, with a substantial overseas broadcast audience.  And that particular test was against the Wallabies, and Australia is the largest export market for New Zealand firms’ goods and services.

I can’t be sure I jotted down all the advertisers: I was dependent on the camera angles Sky showed and I wasn’t paying rapt attention to every second of the game.

But these were the companies/brands whose adverts I thought I spotted:

So I noted 26 advertisers.  One was a local government agency.  Of the remaining 25, 11 were overseas firms/brands, selling into the New Zealand market and in other countries.

It was the other group of firms/brands that interested me.  Of them, as far as I could tell only two were New Zealand based internationally-oriented firms: Air New Zealand, and Mainfreight (which now has substantial overseas operations).  And Air New Zealand, while currently very successful, collapsed only 15 years ago, remains majority state-owned, and one assumes its continuing independent status largely depends on the heavily regulated nature of the international airline and landing rights market.

I gather there are some reasonable substantial exports of Steinlager, but then Steinlager is a product/brand now produced by a Japanese-owned company.

Perhaps on another occasion a rather different mix of companies would have been advertising, and the New Zealand based ones might have been a more outward-oriented group.  But in microcosm, it did seem to capture something of the strangely-imbalanced New Zealand economy, struggling to make inroads in international markets or against international competition.

That phenomenon is nicely illustrated by my regular chart showing tradables and non-tradables components of GDP (recall that primary production and manufacturing, and exports of services make up “tradables” –  and the rest of GDP is non-tradables).  It is only a rough indicator, but it seems to have told quite sensible, intuitively plausible, stories. 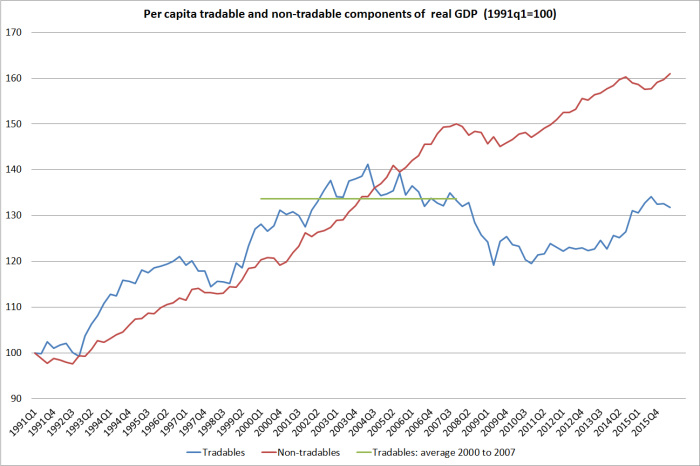 In per capita terms, tradables sector GDP is still lower than it was on average in the first eight years of the 2000s (prior to the recession). In fact, the peak in the series was way back in 2004q2.  There has been no sustained growth in average per capita tradables sector production for 15 years.

That shouldn’t really be very surprising.  With able people and fairly good institutions, still the main thing New Zealand has going for it, as location for internationally-oriented businesses, is the natural resources that are here.  And when the population increases as rapidly as it has in the last 15 years, with no major new natural resources to tap, and with sustained upward pressure on the real exchange rate, it is hardly surprising that there has been so little (per capita) tradables sector growth.

Or so few successful outward-oriented New Zealand firms to advertise to the world from Eden Park.