I mentioned this morning that talk of slow and controlled adjustment down in house prices reminded me of a cartoon from the 1980s, contrasting the Douglas and Anderton approaches to economic reform.    Having dug around in my garage, here is the cartoon.

There are no totally easy or fail-safe ways to unwind the disaster that the New Zealand –  especially Auckland –  housing market has become.  But this is a clear example where the sooner it happens the better.  If house prices rose sharply one day and were reversed the next, almost no one suffers.  If prices rise sharply for six months and then fully reverse, a few people will have difficulty –  but the losses will be isolated and limited, posing no sort of systemic threat.  But if real house prices stay at current levels for the next 20 years, most of the housing stock will have been purchased (and borrowed against to finance) at today’s incredibly high prices.  There will have been a massive real wealth transfer to this generation of sellers (sellers, not owners).  And that transfer itself simply can’t be unwound no matter what happens to house prices.  If house prices were to fall now, there has still been quite a redistribution, but four years of turnover is quite different from 20 years of turnover.

In the Douglas-Anderton debates illustrated in the cartoon there were some real and legitimate choices about timing.  If one is stripping away industry protection, or substantially restructuring government agencies, there are some reasonable questions about how much notice one gives people to reorient their lives, and businesses, and find new options.  The protected industries were mostly pretty static, and a signal that protection would be stripped away over five years would call a halt to most new investment anyway.   The house price situation is different.  Even if prices go no higher from here –  the sort of the thing the government and Labour Party seem to want –  more and more people are getting caught in the web of paying (and borrowing) too much for houses with every passing month, just through normal housing turnover.  For each new borrowing family, that choice will affect their consumption options for the rest of their lives.

But lets take a deliberately extreme contrast: on the one hand, house prices fall 50 per cent tomorrow, and in the alternative scenario they fall 50 per cent steadily over the next five years.   Who would gain from the gradual adjustment?  There is no obvious gains to banks –  the debt is what it is, and at least conceptually they’d want to mark down the value of the collateral straightaway.  There is no obvious gain to existing owner-occupiers.  There is no  obvious gain to the economy as a whole –  indeed, arguably a climate of expected continuing falls in house prices might be worse for activity than a single sharp adjustment. Of course, there would be some winners and some losers –  the losers would be the people who for some reason simply had to buy a house in the next few years (they’d pay more than in the sudden adjustment scenario) and the winners are the few smart or lucky people who manage to offload their properties before the full adjustment occurred.  In fact, what we would see is turnover in the housing market dry up for several years, which would also make it more difficult for those who simply had to transact to do so.  Again, not an obvious social gain.

Sadly, it isn’t going to happen, but given the mess successive governments have created a 50 per cent fall in house prices tomorrow as a result of land use liberalisation would be one of the single best things that could happen –  and much better than the false promise of some sort of controlled gradual fall (such things just don’t happen). Sure, it wouldn’t be easy for some, but the number of people who will be adversely affected if the housing problems are ever really resolved grows by the day.

Changing tack, on the front cover of my cartoon collection I have this cartoon from early 1991. 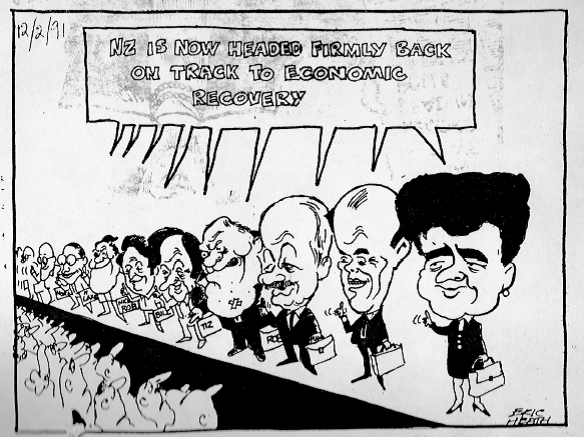 For some years, I had it pinned to the wall in my office –  the sad procession of successive Ministers of Finance who for decades (this cartoon implies back to the 1950s) had promised that New Zealand’s decline would be reversed (made worse in this case in that Ruth Richardson must have said something along these lines in February 1991, just as the severe recession of that year was taking hold).      Since then, we’ve had Bill Birch, Winston Peters, Bill English, Michael Cullen, and Bill English again, and although we’ve had plenty of cyclical ups and downs, never at any time have we looked like successfully or sustainably reversing our relative economic decline.   It saddens me every time I look at this cartoon –  so many decades, so much failure.

29 thoughts on “A couple of cartoons”