I don’t have a great deal to say about the Reserve Bank’s statement this morning, which seemed to conform to my interpretation of the Governor’s “reaction function” over the last 12-18 months.  He really doesn’t want to cut interest rates at all –  after all, he keeps stressing just how “accommodative” monetary policy already is –  but he cares enough about the inflation target that if there is a heightened risk that inflation might stay below 1 per cent for too long then he will, reluctantly, act.

On process, I think the fact of today’s statement helps illustrate why the recent change in the Bank’s OCR announcements timetable is not particularly helpful.  On the old timetable, there would have been an OCR announcement itself this week or next.  Even though it is only now three weeks until the next MPS the Governor clearly felt things were important enough that he needed to make a signal now, rather than waiting until they had gone through the full forecasting process.

There has been a two month gap between the June and August MPSs.  But look ahead to the release calendar, and there is a three month gap between the November MPS and the February 2017 MPS, with no OCR reviews scheduled over that period.  Yes, we all know that New Zealand shuts down for a few weeks from late December to mid January, but a great deal can happen in three months at any time of the year.  Data keep on being published locally, commodity prices and exchange rate change daily, and the economies of the rest of the world keep on as normal.  Two months is often going to be too long between OCR reviews, but three months will usually be too long –  whether the Bank is in a tightening or an easing cycle.  It risks jerky OCR adjustments and miscommunications and misunderstandings (of which there have been more than enough recently anyway).

It was also a shame that the Bank chose to release its update this particular morning.  The Bank’s survey of expectations is an important input into the monetary policy process,  and especially the measures of medium-term inflation expectations.  But that survey was being taken yesterday and today, meaning that some respondents will have answered before the Governor’s statement and some after it.  That will, to some extent at least, muddy the waters when the expectations survey data are released on 2 August.

In terms of substance, I guess we should be thankful for small mercies.  The Bank is explicitly recognizing that it is getting harder to meet its inflation objective –  a target it has failed to achieve for years now.  But I remain rather uneasy about the heavy focus on the  exchange rate, and on tradables inflation.  Perhaps there is a little more reason than usual to focus on headline inflation –  and the impact of short-term fluctuations in tradables prices –  given that inflation has been so far below target for so long.  There is a real danger that people are coming to think of something around 1 per cent as a normal rate of inflation, not the 2 per cent the Bank has been mandated to focus on.  But in general, central banks are better advised to focus on core pressures on domestic non-tradables inflation –  something the Bank itself has often highlighted in the past.  Nothing of those sorts of ideas is apparent in today’s statement at all.  If anything, the Bank continues to assert that capacity pressures are ‘rising’ –  on what measures, or supported by what indicators, they don’t say.  And for all their apparently growing unease about the rest of the world they seem reasonably upbeat on domestic economic activity – even though there has been very little per capita GDP growth at all in the last year.

With trends in the underlying measures of inflation so low, I think OCR cuts are clearly warranted –  and have argued since mid last year that something nearer 1.5 per cent was warranted –  but the Bank’s continued reliance on headline inflation arguments suggests that they still “don’t really get it”.    The core trend in inflation remains too low to be consistent with the Bank’s target (and, not incidentally, the unemployment rate suggests ongoing excess capacity).  There has been some sign of stabilization in core inflation measures, and perhaps even a very slight increase, since the Bank finally realised it needed to be cutting rates not raising them, but there is a long way still to go.  And that would be so even if the TWI was at 72.     As a reminder, despite the persistently weak inflation rate –  surprising the Bank more than anyone –  the real level of the OCR is still no lower (and most likely actually higher) than it was two or three years ago before the Bank started its ill-judged and unnecessary tightening cycle.  New Zealand interest rates are typically well above those in the United States, but there is nothing in the relative cyclical performance of the two economies suggesting we need an OCR even 175 points above the US policy rate.

Of course, there is an alternative perspective.  In the Dominion-Post this morning, Pattrick Smellie asserts that “it’s not the Reserve Bank’s fault that monetary policy as we knew it is broken”.  He argues “how realistic is it to think that cutting rates further will revive domestic inflation when we’re importing the absence of inflation from the rest of the world?”  There are certainly some common global factors at work, but we need to recall that (a) most advanced countries have exhausted conventional monetary policy capacity, while we haven’t, and (b) New Zealand has had an inflation rate that has been undershooting the target by more than in the case in many –  not all –  other advanced economies (eg Australia, the US, or Norway).  It isn’t a case that the monetary policy model is broken in New Zealand, so much as that the Reserve Bank Governor has been reluctant to give it a try –  reluctant, that is, to do his job.  Put the OCR quickly to, say, 1.5 per cent and –  absent a big new adverse global shock –  I think we can be reasonably confident that future inflation would be tracking much closer to 2 per cent than seems likely (even to the Reserve Bank) on current policy.

As a reminder, here is the New Zealand (headline) inflation outcomes over the current Governor’s term. 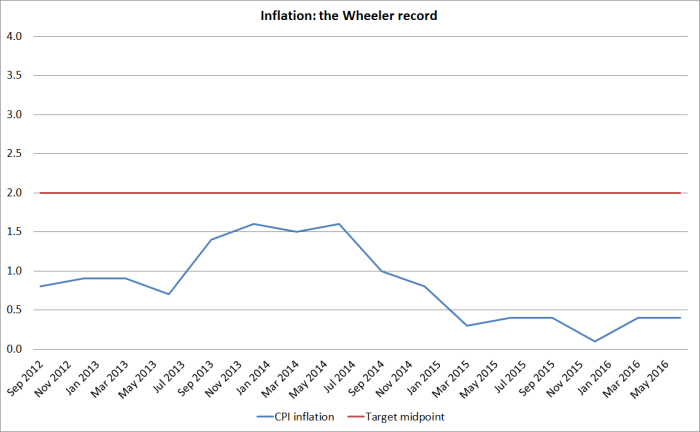 On current reckonings there is little chance of headline inflation even getting briefly to the target midpoint at any time in the Governor’s five year term.  Not a record to be proud of, especially as the Governor himself championed the case for a focus on the midpoint.

6 thoughts on “The Reserve Bank’s update”