The sadly inadequate quality of New Zealand’s immigration policy, and official advice around it, is on display again today.

In late July, as the headline announcement in the Prime Minister’s National Party conference address, the government announced a number of immigration policy changes.  One of those changes was to offer materially more points to people applying for entry as skilled migrants if they had a job offer outside Auckland.  The relevant Cabinet paper hasn’t been released, and nor has there been any regulatory impact assessment published.

But the Herald asked for a copy of Treasury’s advice on these changes.  The Treasury’s view on the proposal to grant permanent residence to certain low-skilled workers was withheld (we might reasonably assume the comments were quite sceptical), but the Herald reported what they got here.  My thanks to Kim Fulton at NZME who passed on a copy of what was released.

Here is what Treasury had to say about the proposed scheme. 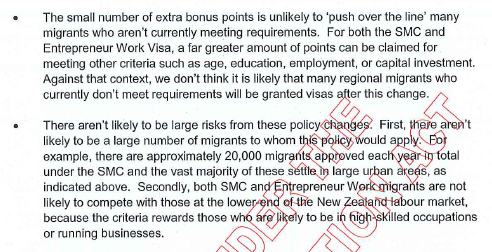 Cabinet must have agreed with them to some extent, since the final announced version of the policy was twice as generous as the version of the proposal Treasury was commenting on.

I entirely agree with them that the proposed changes –  and even the amped-up approved version –  is unlikely to do anything useful for regional development.  It is just another “subsidy”, and subsidies are both costly and aren’t what the regions need.  A sustainably lower real exchange rate –  and perhaps some comprehensive reform of capital income taxation – is much closer to the heart of what would make a difference.

But what I found surprising and disappointing was how blasé Treasury seemed to be about the whole proposal: “won’t do much good, but not many risks either”, which is pretty much a message from the government’s chief economic adviser that Cabinet might as well go ahead.

What are the risks?  Well, first and foremost, as I noted here, any person who just gets across the points threshold and secures permanent residence will beat out some other potential migrant who was objectively better qualified (whether on age. education, employment or capital investment –  Treasury’s own list).  And contrary to what Treasury suggests, this proposal isn’t just affecting a small number of people. On Treasury’s own numbers around half of migrants go somewhere other than Auckland, so the potential for debasing the average (and marginal) quality of New Zealand’s migrants is quite real.  As I’ve been highlighting in the last few weeks, a large proportion of our migrants (and temporary workers) are already not that skilled at all.  As Treasury has struggled to produce any convincing evidence of the gains from the large scale immigration programme, we might have hoped that they would be rather harder-nosed in pushing back against changes that worsen the chances of real and tangible gains to New Zealanders ever showing up.

And then Treasury observes that there isn’t much risk of competition with people at the lower end of the New Zealand labour market because the skilled migrant category rewards high-skilled people.  Yes, and very high-skilled people will easily cross the threshold already, and won’t represent competition for people at the bottom end of the market.  But this change is about making things easier for people who just aren’t that highly-skilled –  they are the marginal cases, and they get in only because they manage to get the extra points that will come from securing a job offer outside Auckland.  At the margin, it is those people –  the ones who directly benefit from this policy –  who are most likely to be competing with people at the lower end of the New Zealand labour market. I’m not suggesting they’ll be competing with shelf-fillers and checkout operators, but there are plenty of immigrants who don’t appear to rank very high up the spectrum of skills. There will be more under this policy.

As I read the advice I wondered why Treasury was not rather harder-nosed in its advice.  As we saw in previously released papers, they seem much less sanguine about the economic benefits of immigration to New Zealanders than their chief executive has been.  Perhaps they just didn’t have much time to look at the proposal and the weaknesses in the proposal just slipped through?  Perhaps they just knew it was all about politics, and the headlines in the media after the Prime Minister’s speech?

The permanent residence approvals programme, and especially the skilled migrant category, is seen by the government as an “economic lever”.  It operates on a very large scale, and has significant effects across the country.  We should expect a rather more rigorous critique –  and some of that rare free and frank advice – when ministers want to debase the currency (points), in ways that must, if the policy works at all, debase the average quality of the new migrants.  Productivity growth isn’t so abundant in New Zealand that we can afford a cavalier Treasury when proposals turn up that will, if they do anything, worsen our productivity prospects.