It is two years today since my first post about pandemics (and the economy). Rereading it, and another the following week, over the weekend and it was interesting to reflect on what issues had (and hadn’t) sprung to mind. But back then, however fearful people might or might not have been initially, few would have supposed that two years on we’d be labouring under new, and even more onerous, restrictions, and that for the best part of two years few of us would have been able to travel.

I was quite supportive of the need for restrictions, especially at the border, for quite a long time. Even last year, when the government was so slow to roll out the vaccine, doing everything possible to keep the virus out would have seemed appropriate (ie more than the government actually did). As for domestic restrictions, in both 2020 and 2021 the government clearly overshot, imposing (and renewing) some restrictions that seemed more about asserting power and showing who was in control than about public health, and others that failed all tests of decent humanity. (None, of course, were ever justified by any sort of cost-benefit analysis – an abdication of any sort of decent policy analysis that I hope one day our politicians and senior officials look back on in shame.)

But that was then. Since late last year, the government’s approach has increasingly lost any coherence. Despite high vaccination rates, we’ve had extreme coercion used on those reluctant to get vaccinated, and we’ve lurched down a path of “papers please” where those who refuse to show their government papers are prohibited (either by law directly, or enabled by it) from undertaking many of the normal activities of life. All this as (a) it was clear that the biggest risk posed by the unvaccinated was to themselves, and (b) that lots of vaccinated people were getting Covid anyway, apparently often/mostly from other vaccinated people. Government guidelines as to when it would ease restrictions were repeatedly ignored by the government itself. The government meanwhile had confirmed that it had given up on elimination some time ago.

And then, of course, came Omicron – two months ago in other parts of the world. The experience of Omicron so far seems to be that it is highly highly infectious, partly as a result waves don’t last long, and among the vaccinated (even more so the boosted) the rates of serious illness and/or death seem remarkably low. In some places – the UK is the most obvious example – even with a lot of cases, numbers in hospital ICU care did not even increase during the Omicron wave (but there is a variety of experiences, depending in part on starting points). Nowhere, it seems, is there evidence of the spectre of “overwhelmed health system” having been realised (although you might expect, even hope, that systems would be put under some pressure).

As for our government, first it seemed that they shut down for the holidays. In normal times, no one would begrudge them that, but this was something more akin to “wartime” – a major threat unfolding, inter alia, just across the Tasman. You might have thought that all hands would have been on deck, led by the Prime Minister, with planning (and public consultation on those plans) advancing rapidly. And vaccination centres operating night and day to get vaccinated many more of those eligible for a third dose. Oh, and the child vaccination programme might have got going before Christmas too. But no, this was the government of complacency – we still don’t have their “plan” (apparently something is coming on Wednesday) – and now controls.

Even on what we have seen, policy is all over the place. Last week, they stopped allocating MIQ rooms for ordinary New Zealanders, but that was (a) done with no ministerial announcement, and (b) to affect arrivals a couple of months hence (when who knows what the environment will be). They keep telling us (sensibly, rightly) that Omicron will spread in the community, but then on Friday the government quietly put in place much-extended isolation requirements – of the sort that perhaps might make some sense (if complied with) in an elimination model, but which make no sense now – the more so as they will powerfully deter some from even getting tested.

And then yesterday we got the new general restrictions. From both the PM and the Director-General we were told they were still aiming to “stamp out” the outbreak, but even (especially?) they must know they are just making things up now – a Level 4 lockdown in August didn’t stamp out that outbreak (or wasn’t pursued long enough to), and this lot of restrictions is nothing like Level 4. The more realistic rhetoric/spin seems to be about “slowing the spread” – there are big adverts in the papers this morning enjoining us to get with the team, play our part.

But why do we want to “stop the spread”? I don’t. We are already two months behind much of the world – two months of repressive domestic restrictions and onerous border controls – and for what? Various other places are coming out the other side now, not having had particularly bad health experiences – England, Ireland, the eastern states of Australia, South Africa – while Ardern and her colleagues – apparently with little opposition from National – seem to be determined to try to slow the incoming tide. They’ve provided no supporting analysis, no cost-benefit analysis, there are no end-point dates for these controls (which may not do much “good” anyway, while disrupting lives), and no published criteria – not that on the past record they would ever stick to them – for getting controls off, getting our lives back to normal, binning the “papers please” regime, and opening the border (even just for New Zealanders).

Events are being cancelled all over the place, and whereas (say) we watched the Ashes test in Hobart a couple of weeks ago with large local crowds in attendance (in the middle of a not-small Omicron outbreak) the government is going to condemn us to the grim spectre of test matches with no crowds at all.

Of course, it could be worse. The government could – and may yet – resort to more onerous restrictions (have they done anything to prepare the public for several weeks of 30-40 deaths a day?) but it is unclear what they are trying to achieve, and how their cobbled-together policies fit a strategy. We hear talk about “flattening the curve” but that seems like a recipe for months and months of controls – the sort of restrictions that may appeal to public health professors and some left-wing politicians, but which should generally be anathema in a free and open society. There is talk, always talk, about getting our booster rate up – but (a) whose fault is it they weren’t offered earlier?, and b) even now, because of the delay, the percentage of our population with boosters is already higher than (say) the Australian share 6 weeks ago when their outbreak was getting underway.

People oriented to controls can always dream up reasons for delays – and I might have had a touch more sympathy if the government had shown itself ever willing to get rid of controls that were no longer self-evidently necessary – but they never attempt to show an overwhelming case. In an interesting Newsroom article over the weekend, on preparing for Omicron, Prof Michael Baker justified his case for more restrictions on the basis that “several hundred people” might die if we just let Omicron sweep through. Quite possibly – if one takes the Australian numbers as a guide – but 34000 people a year die in New Zealand, and that number fluctuates (easily plus or minus 1000) from year to year. It simply does not justify restrictions without limit, and lives lived – unable to sensibly plan – at the whim of politicians. 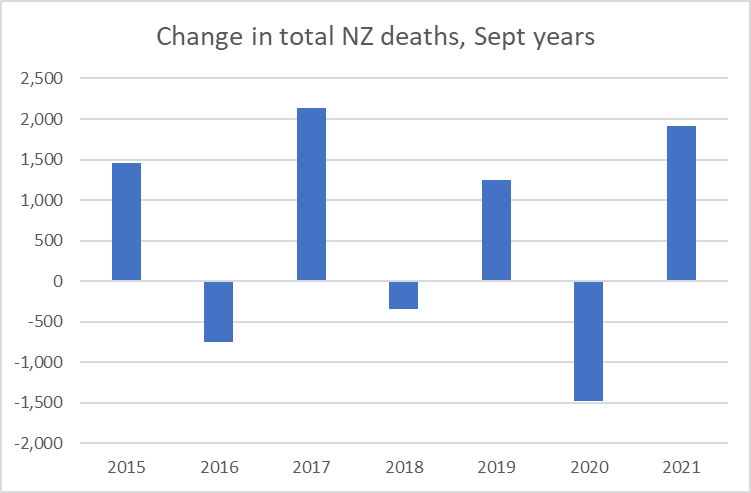 And, of course, we are rightly reminded of the limitations of the public health system. It was a reasonable argument two years ago, but not now, when the government has done little or nothing to boost capacity over two years, and now wants to put us under their (somewhat half-hearted) controls anyway. Sure, there would be likely to be some weeks of extreme pressure on the system, but it is hard to conceive of any serious cost-benefit analysis – that value freedom at all – justifying society-wide restraints, indefinitely, to avoid a few weeks difficulty (and even some otherwise avoidable loss of life).

Now, of course, Omicron will be disruptive even if the government does nothing. Baker, in that same article, seemed to use that as justification for “oh well, we might as well just have lockdowns then”. But there is a big difference between government controls – backed by the coercive power of the state – and individuals and firms taking their own precautions, calibrated to their own individual risk and risk tolerance. I’m pretty sure no one would put off a quiet swim at a deserted beach, or a driving lesson for their child, except the state compelled them,

(And I say all this as someone who is almost 60, and hasn’t had the best of health in the last couple of years. There are risks to life, and – fully vaccinated and soon boosted – I’m quite happy to run those modest risks. I’m not happy seeing events cancelled willy-nilly at government fiat, or governments still stopping people travelling (indefinitely), and so on.)

There are lots of things the government could and should have done much better re Covid over the last 12-18 months. Had they been done we might be in a slightly better position now, but it is water under the bridge now, and nothing about the government or Ministry of Health gives any reason for confidence that we should put up with indefinite restrictions on their say so. They have the power of course, but they abuse and misuse it (down to and including the arrogant disdain evident in the way the government refuses to even put out case/hospitalisation data at a fixed time each day – a simple thing in some ways, but one that simply reveals their indifference and, quite possibly, incompetence).

Better to (a) scrap the vaccine pass system (which simply institutionalises repression, of the sort that should be alien to this country, for no significant public health benefit), (b) open the border to NZ citizens, and (c) cut the isolation requirements to something like those in the US and UK, with a view (d) to following the English lead and looking to remove all Covid restrictions by, say, 31 March (subject to renewal only by vote of Parliament, not arbitrary ministerial fiat with no consultation or transparency).

Oh, and release all the relevant Cabinet papers and ministerial briefings within two days of decisions having been made. These are our lives, our freedoms. We are not supposed to be just playthings of the government. The smallest regulatory changes in normal times have to go through proper (if often faux) consultative processes. Sometimes in emergencies needs must, but this was Omicron – they had the best part of two months to be prepared; do the analysis, test it in public, consult. Instead, perhaps we’ll see a “plan” on Wednesday, perhaps we’ll see the papers and analysis (if any exists) six months from now.