Were I writing yesterday’s post now I would word some things differently. Yesterday afternoon the Productivity Commission drew my attention to their supplementary paper called “The wider wellbeing effects of immigration” which – despite the title – turns out to be mainly about core economic dimensions of the issue, including a substantive discussion of some of the macroeconomic arguments I have been making. Strangely, there had been no cross-referencing to this document in the parts of the body of the main report where, as discussed yesterday, these issues were briefly discussed. I had seen an earlier draft of the macroeconomic bit of this supplementary paper and had provided some comments on it to the Commission.

Awareness of that supplementary paper does not change my main concern about the overall draft report. There is still little or no compelling analysis or insight on any of wider economic issues, no arguments or evidence or reasoning that anyone serious (on either side of the debate or in the middle) is likely to look back to in future and suggest that they saw things a bit differently as a result. There is quite a lot of description but not much in the way of serious evaluation or critique. And this for one of the largest economic policy interventions the New Zealand government undertakes.

But it now flows into a bigger concern that the Commission – despite months of work – really does not know what it thinks, and thus was reduced to highlighting a bunch of second or third order issues. Recall their own summary of their recommendations 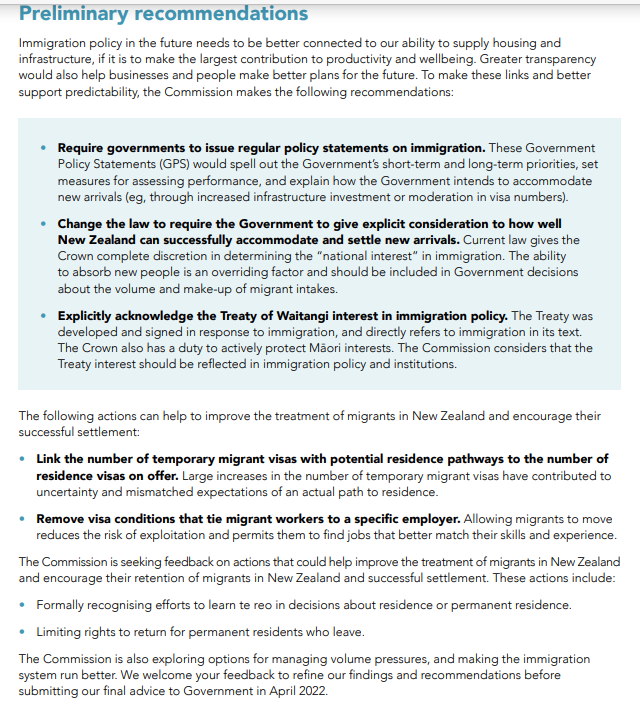 I had thought the Commission was largely endorsing the pre-Covid high (non-citizen) immigration status. I reread the main report last night in the light of the “Wider Wellbeing” paper, and I still reckon that is where their heart is. And that is hardly surprising when the chairman of the Commission had been on record as a vocal champion of using policy to create an ever-bigger New Zealand, and had for years run a story in which monetary policy was the main culprit in any sustained economic underperformance. And thus, as I noted yesterday, in one of their supplementary papers they rely on some modelling done back in 2009 by the chairman’s firm (BERL) which has been touted by some (including ministers in the previous government) as demonstrating the wider economic gains from New Zealand immigration – even though the modelling both assumes away some of the questions required to be answered (the response of business investment), is structured to impose on the model no productivity gains (or losses), and where any gains that do flow (in aggregate) flow entirely to the migrants themselves.

I wouldn’t frame things quite that way myself, but it is interesting that the Commission chooses to do so. You wouldn’t know of anything like this if you just read the Summary (as probably most politicians will only do) or even get much of a hint of it in the main draft report itself. There is no attempt to reconcile it with other material or arguments they cite (including that 2009 paper by the chairman). They might be right or they might be wrong, but the answer should matter materially. Just prior to these “findings” we find this

So, continuing with high immigration has a potentially costly regret whereas (whether the Reddell hypothesis is correct or not), it has no offsetting large benefit. Cutting back on migration will cause short-term disruption to some businesses and loss of small benefits but no large regret even if the Reddell hypothesis is incorrect. In the latter case, a small benefit would be discovering that Reddell’s hypothesis does not hold the answer to New Zealand’s productivity problems. As Fry concludes:
…least regrets suggests that at some point, there may be value in risking the seemingly small benefits from existing immigration targets in order to determine whether larger benefits may be obtained via reduced interest and exchange rates following the adoption of a lower immigration target. (Fry, 2014, p. 26)

That first sentence is quite strong language. It would be news to at least some champions of the policy pursued here over the last few decades. But again it is hardly hinted at in the main report, let alone those higher profile summary documents.

As for the “Reddell hypothesis” itself , the Commission says

At this stage of its inquiry, the Commission is not taking a definite view on the Reddell story

Which, I suppose, is a legitimate stance for them to take, but there is nothing much in the report even indicating where their key uncertainties are, let alone a provisional overall interpretation that submitters could scrutinise and review. I don’t suppose that will seem very satisfactory to anyone, from any side of the debate, considering making a submission. It speaks of a Commission that just has not exercised the intellectual grunt to critically analyse, assess, research and review conflicting arguments and interpretations.

And when they have made the odd tilt in that direction, they seem to end up confused. Again, rereading the papers last night – and recalling some of the discussions I’ve had with them – it is clear that they are quite exercised by problems/delays in building “public infrastructure” and housing. And there are probably – well almost certainly – reasonable points to be made there, even if most of those issues could be addressed directly and thus do not necessarily have connections to immigration policy (although perhaps in a second or third best sense they might).

But they seem to have conflated those issues with the real resource pressure arguments I have been making, even though the two arguments have quite different implications.

Why do I say that? Well, straight after that line above about the “Reddell story” follows this sentence

For example, it notes that policies to improve housing and infrastructure supply and to invest in them prior
to migrants arriving, could do much to avoid the problems of ongoing excess demand in those areas.

(There is something of a similar, unjustified, flow in the main report too).

And I’m just shaking my head and going “no, no, no” to that. I’m all for freeing up land use (especially on the outskirts of our existing urban areas), properly corporatising water services, building promptly roads etc (that pass credible cost-benefit tests) but – all else equal, and on the Commission’s own arguments – these reforms would boost investment spending. But at the heart of the bit of my story which they seem to take most seriously is the simple proposition – from Stage 2 macro really – that real interest rates in an economy are largely determined by the adjustments required to reconcile ex ante desired investment and desired saving. Getting more houses built might well ease house price pressures – itself generally a good thing – but there is no reason to suppose it will do anything positive about lifting New Zealand private business investment, expanding the tradables sector, or lifting economywide productivity. If anything, the risk is that the effect would run a little in the other direction.

Perhaps there will be more analysis in the final report, including looking at the insights we might gain from a careful comparison of our experiences with those of other countries (including the handful of other high-immigration advanced economies). What, for example, does the Commission make of the cross-country evidence that rapid population growth over decades – and ours is mostly now the result of immigration policy – is associated with a larger share of GDP being devoted to housebuilding (naturally and as one would expect) but not with any commensurate lift in the share of GDP devoted to the business investment required to support ongoing growth in productivity and incomes? And so on. But shouldn’t we have been able to have expected a more developed, and robust, story by the time the Commission was publishing several hundred pages of draft reports, not just when the final report lands on the desks of ministers?

Mightn’t we, for example, have hoped to see compare and contrast of the view (with which I largely agree) that high levels of immigration don’t make wage-earners worse off relative to others in society (in fact, the excess demand pressures I’ve highlighted seem to have boosted NZ wages relative to growth in nominal GDP per hour worked), and the view – that the Commission seems at times sympathetic to – that high immigration to New Zealand may nonetheless have damaged economywide productivity growth, and thus held back the improvements in living standards that all of us might have aspired to. They aren’t at all inconsistent (and similarly if the optimists are right high immigration could be boosting economiywide productivity growth, and yet in such a world we might still see wage-earners getting a slightly small share of a much larger GDP per capita).

As it stands at present, the Productivity Commission’s work on immigration just really isn’t fit for purpose. No wonder what they presented us with highlighted those third order or bureaucratic process points rather than offering something offering genuine New Zealand specific insight on how this major tool of public policy has, or has not, worked for the economic wellbeing of New Zealanders.

8 thoughts on “Productivity Commission at sea”