I’ve been reading a couple of books in the last week or so about the decline and fall of the Soviet Union (USSR). The first is Armageddon Averted: The Soviet Collapse 1970-2000, by Stephen Kotkin a Princeton historian who has since gone on to write an (as yet unfinished) three-volume life of Stalin, and the second The Struggle to Save the Soviet Economy: Mikhail Gorbachev and the Collapse of the USSR, by Chris Miller, another US academic historian.

Both are quite short, but for anyone interested in the era they are well worth reading. Kotkin’s book was first published in 2000 so really rather close to the events he was trying to make sense of (the revised edition I read dates from 2008), while Miller’s book is much more recent, published in 2016. Kotkin attempts to synthesise and offer an overall interpretation, while the Miller book draws deeply on Soviet-era archives, up to and including minutes of Politburo meetings. I found Kotkin interesting for a number of points, including the (obvious once you think about it) way in which this heavily armed behemoth, heir to hundreds of years of Russian imperial expansionism, dissolved so peacefully. He highlights the contrast, not far away and at much the same time, with the wars of the Yugoslav succession, but also with the unwinding of European empires a few decades earlier. Another point he emphasises is that the dissolution of the empire was, at least in part, a consequence of way the Soviets had set up their system. The tie that bound the individual republics (set up after the Revolution) together was not, so he argues, the central state itself (republics were not legally subservient to the central state) but rather the Communist Party, and once the Party’s monopoly on power was reduced/eliminated by Gorbachev there was little left to hold the Union together – other perhaps than brute force which by 1991 no one was willing to consistently use (not even those who staged the feeble coup of August 1991).

The Miller book was much closer to the usual concerns of this blog. It was a fascinating discussion of economic policy in the last years of the Soviet Union, with a particular emphasis on what the Soviets were learning from China. I hadn’t known how closely and carefully Soviet officials and scholars were studying the Chinese experiments with economic liberalisation after the late 1970s, or the extent to which (a) they were recognised as successful and (b) especially after 1985 were imitated. Miller also highlights how Soviet officialdom already knew what gains could be on offer from reform, from previous (abortive, short-circuited) experiments, including under Brezhnev in the 1960s. The macroeconomics was also enlightening – both the extent to which the Soviet Union had maintained macroeconomic stability and fiscal discipline up to the early 1980, but then the extent to which budget discipline was thrown to the wind in the Gorbachev years. That was partly bad luck – falling oil prices, partly the consequences of ill-thought-through initiatives (eg loss of tax revenue from the assault on heavy vodka drinking) – but much of it was in an attempt to buy off reluctance to reform from the powerful interests and patronage networks which – so Miller argues – by this time dominated the Soviet system (be it the agriculture sector, oil and gas, the military and the associated industrial complex or whatever. Miller argues that those around Gorbachev thought of this partly as a reasonable gamble – if they could materially accelerate growth, as in China, they could grow their way through the deterioriating fiscal (and hence monetary) position. It was not, of course, a gamble that worked, and the first few years after 1991 saw widespread economic chaos.

Miller argues that the strategy was never likely to have worked, and contrasts that with the experience in China. Why couldn’t it have worked? In the end, his claim reduces to the proposition that those who really favoured reform simply did not have the political clout to make it happen, even if one of those was the General Secretary himself. For decades after Stalin – under whose reign of terror many were shot, senior people were moved around frequently – the patronage networks (within which people often spent an entire career) were able to grow to become a force they simply weren’t in China (just after the further upheaval of the Cultural Revolution). Add to that things like the fact that life in the USSR was relatively comfortable in 1985, in a way that it hadn’t been in China in the late 70s. The imperative for change was much weaker, whether near the top, or at the grassroots (he contrasts the attitude to agricultural reforms of Chinese peasants and Russian farm workers). And there was the military, consuming a huge proportion of GDP in the USSR and reluctant to adjust, in contrast to the reduced military expenditure in China in the first years of economic reform.

There is one contrast between the USSR and the PRC that emphasises that in China the Communist Party kept hold on power and Russia it gave up power. For the CCP that is a clear victory (whatever it means for the Chinese people). But the other often attempts to tell a story about relative economic performance, with an emphasis on those first few severely disrupted years after 1991 in the (former Soviet Union) and, of course, the high growth rates the PRC continued to report for a long time. In this part of the world, New Zealand politicians and business people are nauseatingly prone to praising what they see as the economic success of the PRC (as if somehow this covers for the innumerable abuses of the regime).

China was, of course, richer than Russia for a long time. For not inconsiderable periods of history China was at least as rich – or richer – than anywhere on the planet. Russia never was. But here is the (rough) picture of GDP per capita comparisons for various years, drawn from the (widely-used) Maddison database.

By 1913 – the eve of World War One – estimated GDP per capita for the “former USSR” (of which Russia is the largest chunk) was almost three times that of China. The “former USSR” in turn enjoyed real GDP per capita less than a third that of the leading bunch of countries (including New Zealand), and less than a third that of (say) France and Germany

By 1980 – several decades each of Communist Party rule – real GDP per capita was about six times that in China (as noted above, the starting points for reform were very different). China really was an utter basket case.

But where do things stand now, after decades of fairly rapid growth in China, and decades on from the chaos of the immediate post USSR period?

Here are the IMF’s estimates for real GDP per capita for the former Soviet Union countries and China.

Even using these official numbers – and people like Michael Pettis will argue compellingly that GDP in China does not mean what it does elsewhere – China currently has real GDP per capita a bit less than Belarus, a bit more than Turkmenistan. The Baltic states are stellar performers but even authoritarian Russia, heir to all that 1990s dislocation, has real per capita incomes 55 per cent higher than those in China.

And what about labour productivity? The IMF doesn’t produce estimates for that, but the Conference Board does. Here are their latest estimates for the whole former Soviet bloc, and China. 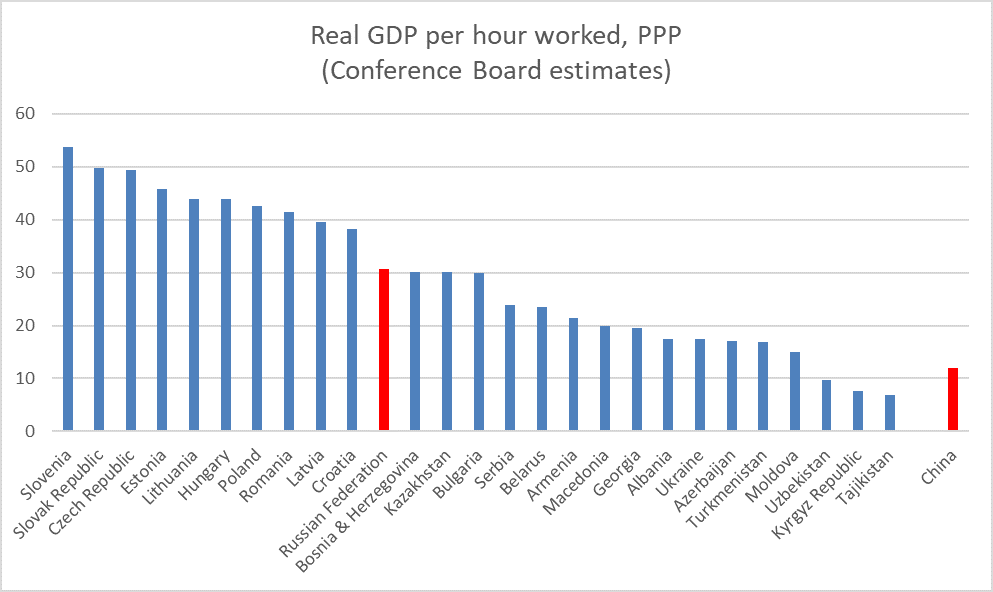 China makes Belarus look really rather good, and on these estimates China is still lagging behind Moldova. The gap between China and Russia is huge and – as best as can be told from these estimates – Chinese productivity growth has slowed sufficiently it is no longer obvious they are even closing the gap.

Russia, of course, is hardly a stellar performer. You can see it even on these charts, and in GDP per capita terms it is still only about half the incomes earned per capita in France and Germany/

And then one last set of comparisons.

China pales by comparison with all of these economies, even grossly-underperforming New Zealand.

There were things the USSR was able to learn from the PRC 40 years ago. But how to generate a high income country, that might match the material living standards in the West – a constant aspiration – was not then, and is not now, one of them.