The debt numbers in yesterday’s PREFU are, to me, almost the least concerning aspects of the pages and pages of numbers/charts The Treasury published. My preferred debt measure – net core Crown debt, including the government financial assets held in the NZSF – is projected to peak at just under 40 per cent of GDP. As I’ve noted previously, numbers like that at the start of this year would have put us in the less-indebted half of the OECD countries then. By no obvious somewhat-objective metric is net debt at those sorts of levels particularly problematic, even if bond yields (and eventually, we assume, the OCR) do eventually head back in the direction of more-normal historical levels. And I hope neither main party – whether at this year’s election or that in 2023 – is going to make a fetish of specific timebound numerical targets for a particular debt measure (governments in few other countries do).

That said, the fiscal picture is not a rosy one. And it isn’t just because of Covid one-offs or because of the recession itself. Treasury produces estimates of the cyclically-adjusted balance, and this time gave us numbers that also stripped out those Covid measures. This is the resulting surplus/deficit chart. 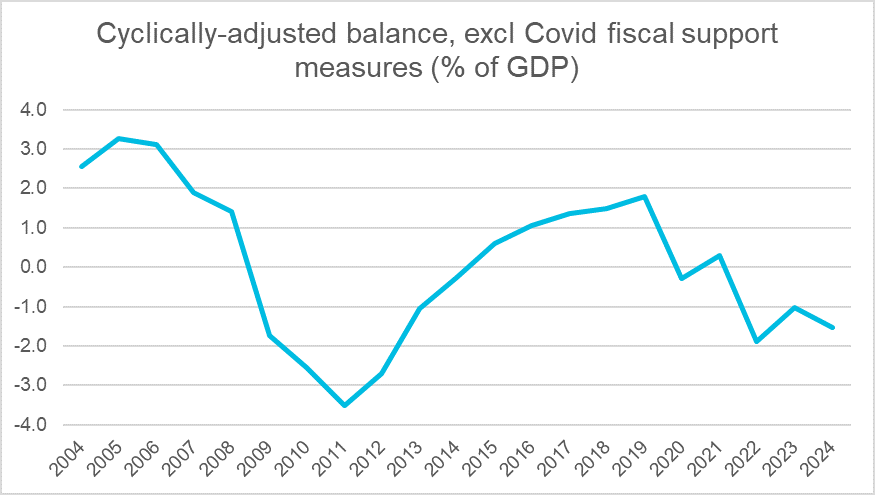 Treasury estimated that there was a modest structural surplus over the second half of the 2010s, but now reckon the structural deficit will be around 1.5 per cent of GDP once we emerge from the immediate shadow of Covid. A three percentage point deterioration in the structural balance isn’t ruinous in and of itself – and is smaller than the moves in the previous decade – but it isn’t something to be entirely relaxed about either. It is the result of specific choices about permanent spending/tax choices. One would want to be comfortable that spending choices were of a particularly high quality.

I’m rather more bothered by the overall macroeconomic story, and the apparent complacency of The Treasury in these matters – not just as principal macro advisers to the government, but given that the Secretary to the Treasury is a non-voting member of the Reserve Bank Monetary Policy Committee. In four years time, the unemployment rate is forecast to still be materially above the NAIRU (and the output gap materially negative), and inflation is barely getting back to the target midpoint. A standard view of the monetary policy transmission mechanism is that monetary policy works with its fullest effects over perhaps an 18-24 month horizon. And yet on these projections not only has fiscal policy largely done its dash already, but there is hardly any further easing assumed in monetary policy (90 day bill rates drop to 0.1 per cent, but the OCR seems never to go negative). We have macroeconomic stabilisation policy to produce better cyclical outcomes than that. It has the feel of an approach that is just fine with people not likely to lose their jobs – Treasury and Reserve Bank officials – but shouldn’t be counted satisfactory to the rest of the population (and voters). Macro policy can’t solve structural failings, but it can address sustained cyclical weakness. A serious Opposition might make something of this, and reflect on the capabilities and priorities of our macro policy officials, and indeed on those (in the Beehive) who appoint/retain them.

One issue I’ve hammered on about here over the years is New Zealand’s rather woeful foreign trade performance. At the high tide of the latest wave of globalisation, we spent this century to date with the value of exports and imports shrinking as a share of GDP.

Treasury only produces volume forecasts for exports and imports in the PREFU. They aren’t pretty. Of course, (services) exports and imports are currently taking a large hit from closed borders, but Treasury assumes borders are reopened by the start of 2022.

Over the last economic cycle (2007/08 to the end of last year) the volume of New Zealand exports more or less kept pace with the growth rate in real GDP. But on Treasury’s forecasts over the full five years to 2023/2024, real GDP is projected to have risen by 8.4 per cent, while the volume of exports is projected to have risen by only 1.7 per cent. And whereas the volume of imports – things we consume, and use to produce – ran ahead of the growth in real GDP (quite significantly, as real import prices fell), even the latest forecast period to 2023/24 import volumes don’t even manage to keep pace with the subdued growth in real GDP.

As the prices of both exports and imports tend to grow more slowly than general prices (CPI, GDP deflator etc) and since Treasury projects the exchange rate goes nowhere over the next five years, these projections will be consistent with exports/imports falling to around a quarter of GDP. At the turn of the century they were around a third. And yet (growing) trade with the rest of the world is a key element in almost any country’s economic success – particularly for small countries.

The bottom line is perhaps expressed in lost GDP. We could do a simple comparison and look at nominal GDP for the years 2019/20 to 2023/24 from the Treasury’s HYEFU late last year and yesterday’s PREFU. Over those five years, Treasury now expects the value-added from all production in New Zealand will be $140 billion less than they thought just nine months ago. (For what it is worth, there is another $200 billion lost in the following five years, a period Treasury does not forecast in detail). These are really large losses, and on the Treasury numbers the associated wealth is never being made back. Nominal GDP matters for various reasons, including that most public and private debt is expressed in nominal terms.

But, of course, there is also plenty of focus on real GDP per capita. Over the last economic cycle (2007/08 to the end of last year), real GDP per capita. increased by about 1 per cent per annum. That was pretty underwhelming growth, reflecting the poor productivity performance and limited outward-oriented opportunities in turn reflected in weak business investment.

But here is rough comparison between the Treasury projections and a scenario in which we’d continued to stumble along at 1 per cent per annum growth in real per capita GDP. 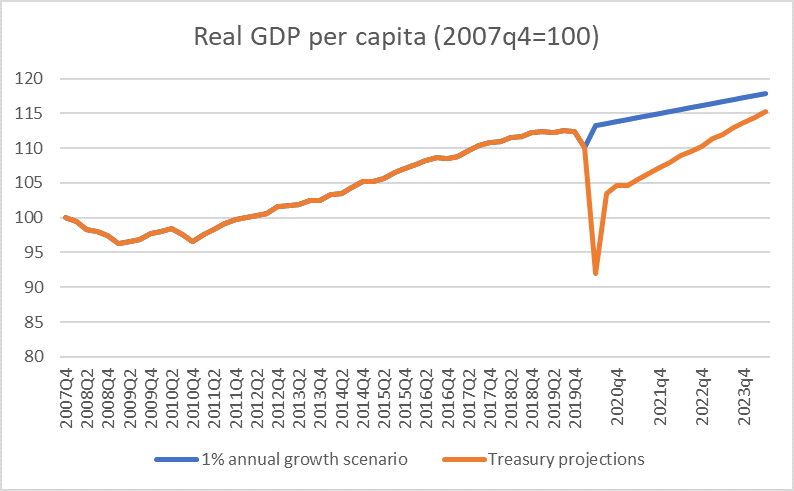 On a rough estimate, the difference between the two lines is just over $100 billion – lost and never coming back. And although the two lines look as though they will eventually converge, my understanding of the Treasury projections beyond the official forecast period is that they don’t. Not only have we lost wealth upfront (that $100 billion) but our real annual income will always be a bit less than we previously thought.

None of these scenarios/numbers looks particularly unrealistically pessimistic to me. If anything, Treasury seems a bit more optimistic than I would be about the wider world economy – given how little has been done with monetary policy, the approaching political limits of fiscal policy, and the way that all societies look to be materially poorer than they would have thought just a few months ago, it is difficult to be very optimistic about the likely pace of sustained economic rebounds anywhere. And while Treasury assumes that we keep on in the medium-term with our modest productivity growht, it isn’t obvious even how that is going to be achieved – it is not as if either political party has any sort of serious economic plan. It doesn’t take aggressive fiscal consolidation here or abroad to think that private spending growth (consumption and investment) is likely to be really rather subdued for quite a long time to come.

Much of the political debate tends to turn on how much more debt governments have taken on, how much more public spending has been done. And there are important issues there, that deserve ongoing scrutiny, but at least as important is just how much poorer we now look likely to be than we thought just a few months ago. Fiscal policy redistributes among people in New Zealand, but even with all that fiscal support, as a country we are in aggregate so much poorer than we expected to be. And that will influence behaviour, choices, appetite for risk etc in the years ahead.

(Oh, and finally, I don’t have space to labour the point, but isn’t there something shameful when The Treasury reckons that – with no new fiscal or monetary stimulus – current structural features of the housing market (land use, immigration and whatever else) mean that they expect 7.4 per cent house price inflation in 2022/23 and a further 8.5 per cent the following year. That, not whether prices fall a bit this year as ,eg, unemployment rises, should be getting a lot more attention that it seems to be.)