There was the remarkable statement from the Governor that “we don’t comment on government policy”, which we can only hope –  unrealistically –  heralds a new policy for the Governor (as it was it simply got him off the hook of answering an inappropriate question about lockdown policy etc).

More seriously, there was some sense that the MPC and the Bank were beginning to appreciate just how poor the world economic outlook is. I wouldn’t go quite as far as ANZ”s chief economist whom I saw reported in the paper this morning saying “it was hard to imagine a more dovish sets of policies and commentary today”, but my own initial comment to a journalist re the commentary etc was

It is a step in the right direction, even if there is little depth to the analysis (and, for example, no links to more-rigorous supporting analysis).   And of course even the Bank was caught out between the projections being finalised (on the 5th) and released: they’d idly assumed a “level 1” regime from June on.  Perhaps they had little choice in the central track, but there was far too little about the risks of new “lockdowns” and (a) the associated real income/output losses, and (b) associated addition to the already high level of uncertainty facing firms and households –  whether about the virus, the wider economy, or the government’s chosen response.

There was even some recognition that inflation expectations had been falling, usually a sign –  at least if starting at or below the inflation target midpoint –  that people don’t think the Reserve Bank is doing its job. It was all rather played down –  with more emphasis on risks of further falls than the large falls we’ve already seen –  and, as almost always, they chose to totally ignore whatever information is in the inflation breakevens derived from the government bond market.

And yet what did the Bank actually do, that might affect real interest and exchange rates, credit conditions or whatever –  in ways that might make a real difference to the inflation and employment/output outlook?  Nothing.  And that is the problem.

There was plenty of renewed talk of the possibility of negative interest rates. (This was  in conjunction with some possible new instrument – Funding for Lending –  which is unlikely to have very much effect at all: the Governor nicely articulated in the press conference why buying foreign assets wasn’t a good  –  likely to be effective – option at present, and a very similar analysis could be presented for his scheme of lending to banks –  banks (a) not notably being short of funds, and (b) not being known for being keen on dependence on central bank funding, at least outside the immediate white-heat of a crisis. )

But there was no action (not even on the new idea tool).  In fact, the Governor reiterated the commitment that the MPC had made back in mid March not to change the OCR for a year.   And that is even though, as the Governor himself noted, “March feels like a long time ago”.  It isn’t of course, but a great deal has changed since the MPC made that rash commitment –  notably, the MPC itself has belatedly come to appreciate the severity and duration of the economic downturn.    No one expected them to walk away from the commitment yesterday, but it would have been good –  good policy –  if they had. Central bankers should no more be encouraged to keep rash promises than moody teenagers who in a moment of upset threaten to run away from home, or perhaps kill themselves, should be encouraged to keep those rash promises.  From the evidence we have –  what the Bank choses to make available –  little more thought seem to go into the former pledge than into pledges of the latter sort.

Of course, the MPC did pledge to buy a whole lot more government bonds, over the next couple of years.    They still to seem to believe that such actions make a real-world difference to things that affect the inflation/output outlook. But they are wrong to do so. As it happens, I’ve this week been reading Stephanie Kelton’s  MMT tract. The Deficit Myth.  Much of it is a socialist tract, beloved no doubt by Bernie Sanders (her former boss) and Alexandria Ocasio-Cortez, but a fair bit of the first half is a (really clearly written, if somewhat loaded in interpretation) articulation of how fiat money systems work.  It is all stuff most serious central bankers know, even if they don’t use her language.  One of her arguments that it really doesn’t make much difference whether the government pays for its activities by creating settlement account balances at the central bank or by selling bonds (she calls one “yellow Treasurys” and one “green Treasurys”).  And in the current context that is much the same as my argument: the Reserve Bank buying tens of billions of government bonds (generally yielding less than 1 per cent) and issuing tens of billions of dollars of settlement account balances earning, currently, 0.25 per cent just doesn’t –  and wouldn’t reasonably be expected to –  make much useful difference to anything.  It is just an asset swap, doing little more than shifting around interest rate risk (the Crown is now quite highly exposed if something dramatic happens and interest rates need to rise a lot in the next few years).

The Bank continues to claim otherwise. But it is just a claim.  They have a substantial research and analysis operation but have published nothing that would support their claim, nothing that could be externally scrutinised. I guess they believe it, but they’ve gone out on quite a limb with the LSAP so of course they would.

The Bank claims that “the LSAP has [note the certainty] helped keep the New Zealand dollar exchange rate lower than it would have been otherwise”.  They do acknowledge that it is hard to tell but then tell us –  with no supporting analysis – that they think “the exchange rate is 4-10 per cent lower than it would have been without the LSAP programme”.    To which my response would be:

They also claim that the LSAP has made a big difference to bond yields: “we estimate that NZGB yields are at least 50 bps lower, and potentially more than 100bps lower, than they would have been without the LSAP programm”.   They present no analysis – at all – in support of this claim, not even telling us which point on the yield curve they are referring to (the shorter-end will be strongly anchored by the expectation that the OCR won’t be raised for several years).   And perhaps more importantly:

I’m pretty sure I heard the Governor say that there was quite a bit more to do.  And yet, they did nothing.

At the last MPS the MPC chose not to publish projections for the OCR itself, but instead to publish a chart showing an “Unconstrained OCR”, apparently estimated by letting the forecasting model run and give us an estimate of “the broad level of stimulus needed to achieve the Reserve Bank’s employment and inflation objectives”.  This was yesterday’s chart. 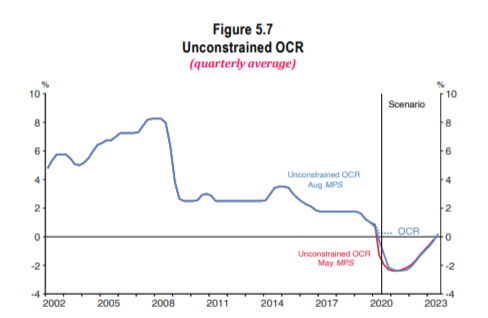 Throw in a whole lot more fiscal deficits and a whole lot more announced bond buying since May and the model still reckons the OCR should be at some below -2 per cent.   Instead, it sits and sits and sits at 0.25 per cent.  On their own numbers, they aren’t doing their job.  In the presence of self-acknowledging downside risks to activity, inflation, and inflation expectations.

So I discovered this morning, it was a year yesterday since the Governor’s extensive interview with Newsroom was published, in which he championed negative interest rates as the preferred policy tool in the next serious downturn.  It was a good –  informative, thoughtful – interview and we’ve never had an explanation for why he changed his mind (or, less probably, was overruled).  We do know, of course, that he and his staff did nothing to ensure that banks’ systems were ready and able, despite years of advanced notice, and now we are left with any serious monetary policy apparently dependent on how accommodating the Governor is of bank preferences –  and we know banks aren’t keen.   There is evidence that the Reserve Bank now has a serious work programme –  see this response to an OIA request someone else lodged (which the Bank said it was going to post on its website but did not do so)

but they fiddle –  move banks slowly ahead –  while the economy –  real people, real firms –  suffer unnecessarily.

It is simply inconceivable that at any other time, presented with projections this weak, downside risks, and serious new adverse news on the eve of the announcement, that the Bank would not have cut the OCR, perhaps by quite a lot –  not just fooling around with handwaving instruments that they can’t even demonstrate are making a material difference especially at the margin.

Jim Bolger has been in the news briefly this week –  for his irrelevant suggestion that the government bonds held by the Bank be “written off”, which would change precisely nothing of macroeconomic significance –  but he was Prime Minister in early 1991 when the Bank was very reluctant to ease monetary conditions.   There was significant political pressure – with hindsight quite warranted really – brought to bear on the Bank –  and Don Brash had been advised to watch his back when he went overseas.   But this time?  We have a Prime Minister and Minister of Finance who simply seen indifferent, whose innate conservatism seems to extend to not rocking the boat even when officials aren’t doing their job (and when the Minister of Finance has formal delegated intervention powers).

Once again yesterday, the MPC seemed keen to fob off responsibility to fiscal policy. But whatever the MMTers may wish, under New Zealand law fiscal policy does its own thing and then monetary policy –  the MPC – is charged with the residual stabilisation (full employment and all that).   The Bank has the effects of huge fiscal deficits included in its projections –  including that unconstrained OCR chart –  and it presents a nice chart showing that the estimated fiscal stimulus peaks this quarter and tails off from there (with neither main political party appearing keen on further increases in deficits from here).  Fiscal policy has played the ball –  wisely, responsibly, appropriately or not – and responsibility now rests with the Bank and the MPC.  Who are doing nothing, and seem more interested in giving little lectures to banks are to how they should run themselves than in using the tools Parliament has put at their disposal.   Perhaps they’ll do so next year –  still seven months away at least –  but they should have been acting much more decisively not just now but months ago.

21 thoughts on “Abdication of responsibility”