The annual Demographia report on housing affordability across a range of English-speaking advanced countries was released earlier this week.

If you are a New Zealander who cares at all about efficiency, fairness (especially to the rising generation), functioning markets it makes pretty bleak reading.   The focus of the analysis is on the ratio of median house prices to median household income.   Here is ratio for the median urban market in each of the countries they look at 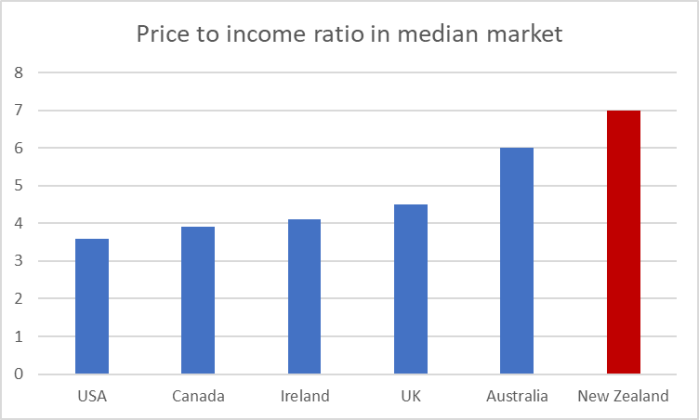 (They also look at the two city states Singapore  (which is in the middle of the pack) and Hong Kong (which is off the charts, see below).

And here is a chart focused just on fairly large cities (>1 million people).  I’ve shown the ten cities with the lowest price to income ratios, the ten with the highest ratios, and a selection (every ten or so rank places) of those in-between. 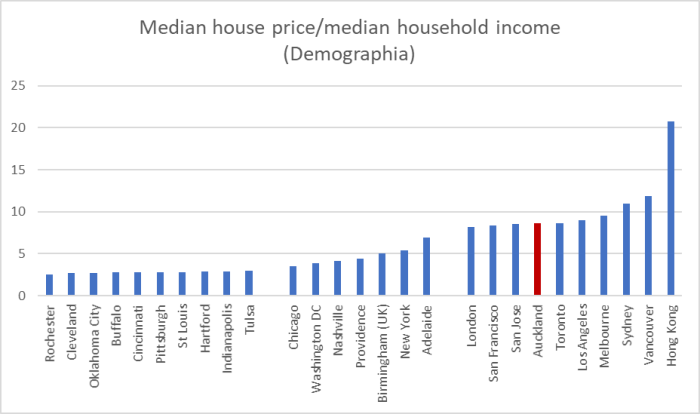 and here are the New Zealand cities in the wider sample 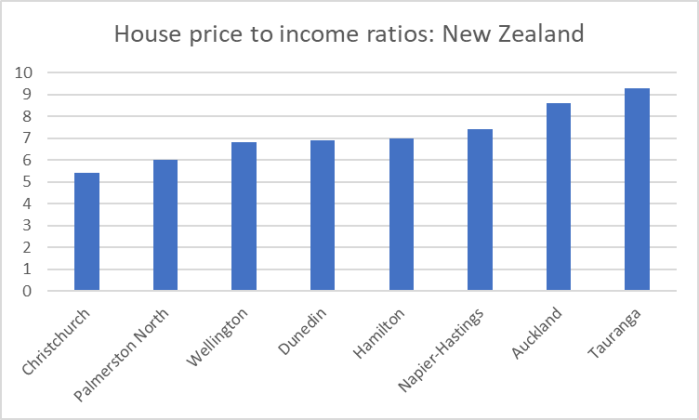 You’ll see people sometimes talk about Christchurch house prices being affordable again but it is worth keeping that claim in perspective –  and, in fact, rubbishing it lest anyone think that the Christchurch outcomes are in some sense good or acceptable.

The Demographia reports looks at just over 300 urban housing markets.  In 46 of them, mostly in the US but not exclusively, the estimated price to income ratio is three or less (what the Demographia authors regards as a normal longer-term level), and 103 have ratios of 3.5 or less.   There are large cities and small cities. Fast-growing places and stagnating ones.  A house price to income ratio of 5.4 (Christchurch at present) mightn’t be the worst in the world, but by no stretch of the imagination is it good.   We –  and people in Christchurch –  shouldn’t be settling for it.  Only 60 cities in the entire sample are worse, on this count, than Christchurch.  And Christchurch is a fairly small city with abundant land, and yet its house price to income ratio is the same as those for Miami and New York.

This particular isn’t perfect by any means. No indicator is.    Among other things, median household income is likely to be partly endogenous to house prices: more people working (particularly both parents of young children) and for longer hours to attempt to afford a house.    And if house sizes are probably fairly similar across New Zealand, Australia, Canada, and the US as a whole, the typical house in the UK is considerably smaller than in those other markets, and no attempt is made to adjust for this difference –  whether across countries or across major cities.   Auckland might be in the top 10 most unaffordable ‘major markets’ but on average you will be getting more house and land for your money in Auckland than in London (let alone Hong Kong). But while it is fair to recognise this latter point, to make very much of it is simply a cop-out.  You won’t be getting more house for your money –  and quite possibly less – in Auckland, Wellington or Tauranga than in Lincoln, Nebraska (ratio 3.3) or Louisville, Kentucky (3.2) or the dozens of other affordable cities across the United States.

One of my slight frustrations with the Demographia report is that it does only focus on English-speaking countries.  While they are often the ones we like to compare ourselves to, it would be more reassuring if there was data on a range of continental European countries and Japan/South Korea. Russia wasn’t one of the countries I had in mind  but in this year’s report, they have a snapshot on Russian cities.   Across Russia, population growth certainly isn’t a factor in driving house prices, although some individual cities (including Moscow and St Petersburg) are growing. Most of the 17 cities have price to income ratios of three or less (and while Russian houses/apartments are probably fairly small, Russian incomes are fairly low even by New Zealand standards).  But both Moscow and St Petersburg have price to income ratios of 4.2.  That’s above the Demographia threshold, but well below Christchurch, Wellington, Auckland (or Tauranga).

There was a little media coverage of the Demographia report.  But just a few months out from another election, where is the sense of scandal, of outrage, of a commitment to produce very different outcomes in the future?  No significant political party is willing to talk in terms of dramatically lowering house prices, or of making the structural changes (mostly to land use policies) that would bring it about, or about supporting in the transition people caught out by the rigged market our central and local government politicians have delivered in the last 30 years.  The scandal –  the sheer unaffordability –  that is so recent now seems to be taken for granted as something normal, inevitable etc.  It is highly abnormal. It is a disgrace.  The burden falls most heavily on the youngest and most marginal parts of the population.  It is indefensible.  And yet neither National nor Labour (nor NZ First nor the Greens) are interested in serious change making a serious and sustained difference.  Oh, they’ll tweak things at the margin, but none of them will talk about aiming for price to income ratios of three, or of rendering incredible the notion that small houses on tiny sections in Berhampore would sell for $1million.