The Herald business columnist Liam Dann had a curious column out yesterday.  When I first saw it online it had a more right-on headline [UPDATE: “Woke wonderland – how a new narrative has changed NZ”] (I didn’t read the article until my wife started quoting bits to me) but it now has the headline “NZ’s population prediction was out by 30 years – the price we are paying”.

Dann had been prompted to write the article by stumbling on a 2004 SNZ release from 2004 which apparently “forecast” (more likely, it was the medium “projection”) New Zealand’s population to get to five million in about 2050.  As it is, it appears that milestone will be reached within the next few months.

The bit that the current headline deals refers to was this

Now I can’t get past the notion that this miscalculation holds the key to many of our social infrastructure problems in 2019.

If that was the population assumption policy makers were using, then of course we have a housing shortage … of course our roads, our hospitals and our schools are crowded.

I’m a bit ambivalent on that point.  After all, it isn’t as if the projections haven’t been updated, regularly, since 2004.    And one could quite reasonably make the point that this specific issue isn’t primarily about surprisingly rapid population growth, as about successive waves of central and local governments (including the current ones) that have made too much of the system not responsive to population surprises.  Planners control where houses can (mostly can’t) be built and most of them have a deeply-held aversion to an increased physical footprint for cities, let alone competitive market processes to determine where and when development occurs.   We still don’t have congestion charging in our major cities.  And so on.  And so the pressures fall on house/land prices and in various forms of congestion or queuing.

All that said, if we were to take as more-or-less given the RMA and associated development constraints then Dann does have a point.  After all, it was the same political leaders who have repeatedly refused to act to free-up land supply etc (and in doing so were, just possibly, reflecting public preferences) who also oversaw the immigration system which has resulted in such a rapid rate of population growth.  The immigration system is much easier to tweak, to manage trend inflows of non-New Zealand citizens, than the entrenched land use issues are to fix.   In that sense blame a series of active (and, more often, passive) choices by our political leaders.

Using official SNZ data, here is how our population has changed since September 2004 (September years are the latest annual data). 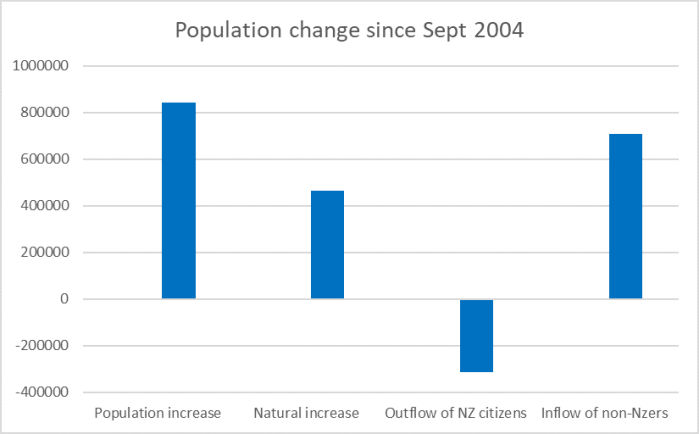 Over the full period, the population has risen by (an estimated) 842000.   Take natural increase (births less deaths) and the large net outflow of New Zealand citizens (another 315000) and you’d have been left with a pretty small rise in the population  (less than 4 per cent in total, over 15 years).

But to a first approximation, if you regard the land regulation situation as largely frozen, then almost all the subsequent pressures can be ascribed to the choice to keep on with large scale non-citizen migration regardless.  Even if you thought it really could be quite readily changed and it was just venal politicians who refused to do the right thing, then knowing that and still supporting large scale immigration (and recall that ours is among the very largest in the world per capita) is akin to knowingly inflicting the resulting house prices, congestion, queues etc on New Zealand.   It isn’t as if other countries have been so good at fixing those land (related issues).   And officials and outside observers knew these issues were a problem 15 years ago.

Of course, having raising the issue Liam Dann –  pillar of the establishment –  is keen to assure his readers that he does not, not for a minute, oppose immigration.  Thus his claim

in my lifetime this country has been vastly improved by more people and more cultural diversity.

I get the impression he must be almost 50 so presumably he is talking about immigration since about 1970.   In reality though, between about 1974 and the end iof the 1980s there wasn’t much immigration, so we are mostly talking about the last 30 years.    I can’t share his optimism, particularly about the raw numbers, in a country that has continued to drift further behind economically over that period, and whose firms have failed –  in aggregate –  to find new products/markets abroad (even though external trade is a key element in any prospective improvement in our relative prosperity).

Anyway, at this point Dann launches into a paean to the better New Zealand we now are that, to me anyway, seems more than a little detached from reality.  We are told that

Something structural has changed.

Now a little later on, Dann does concede that any reduction in net outflows isn’t entirely good news

Australia becoming a lot less friendly to New Zealanders has influenced our net migration rates. It’s not nearly as easy to enjoy the easy life across the Tasman as “Bondi bludgers”.

In other words, poeople may still want to leave, but it is harder to do so.  And it isn’t just about the caricatured “Bondi bludger” but about the difficulty of your kids getting established and ever getting citizenship etc.  New Zealanders are worse off as a result of those tougher Australian policies.

It is also worth pointing out that New Zealanders go to Australia when the Australian labour market is strong.  It hasn’t been that strong in the last few years, after commodity prices peak and the mining investment boom began to pass.  That isn’t good for Australians, and it certainly isn’t good for New Zealanders who might want to take advantage of the higher productivity and higher material living standards abroad.

And, as it happens, the outflow has been picking up again.  Here is the net outflow of New Zealand citizens from the new SNZ migration data. 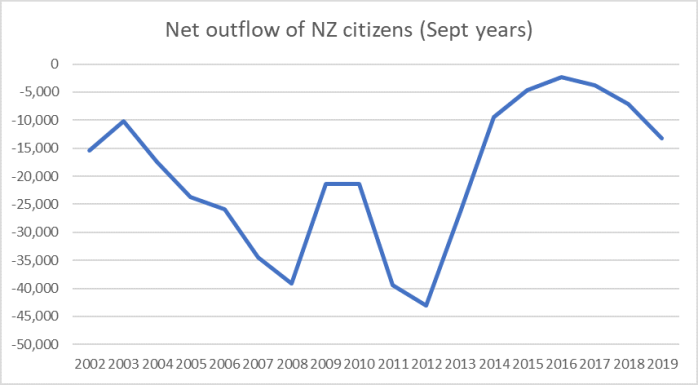 It certainly isn’t a record outflow, but the increase is now becoming quite pronounced.  Not exactly a tale consistent with a wonderful New Zealand.

But when he talks about the migration choices of New Zealand citizens, Dann is just warming up.    The real story on his telling is

New Zealand finds itself being cast as the “woke” capital of the world.

We failed to see what a desirable place New Zealand has become in the eyes of the world.

Complete with all manner of gushy references to the idea that, for example

the UK and US media simply can’t get enough of the notion that this country is a liberal paradise.

Now I’m not going to deny that there are sections of the world media who seem particularly enamoured (for reasons that largely escape me) with our Prime Minister.

But….the surge in net migration this decade mostly happened on the watch of the previous lot, that outflow of New Zealanders has (and it is almost entirely coincidental) increased in the couple of years the current government has been in office, and in case Dann hasn’t noticed, the residence approvals targets haven’t changed much in 20 years now, and actual approvals have been undershooting target in the last couple of years (probably less because of lack of interest than because of processing delays by MBIE).   Because the headline target hasn’t changed much in 20 years, while the population has grown quite a bit, residence approvals for non-citizens are quite a bit less now, in per capita terms, than they were in, say, 2004 (Dann’s reference point).

And why might we doubt that Stephen Colbert (or, on the other side, Donald Trump) or the Guardian really have anything much to do with our population growth?  Well, try this chart from the new MBIE immigration dashboard, showing the top five countries for residence approvals. 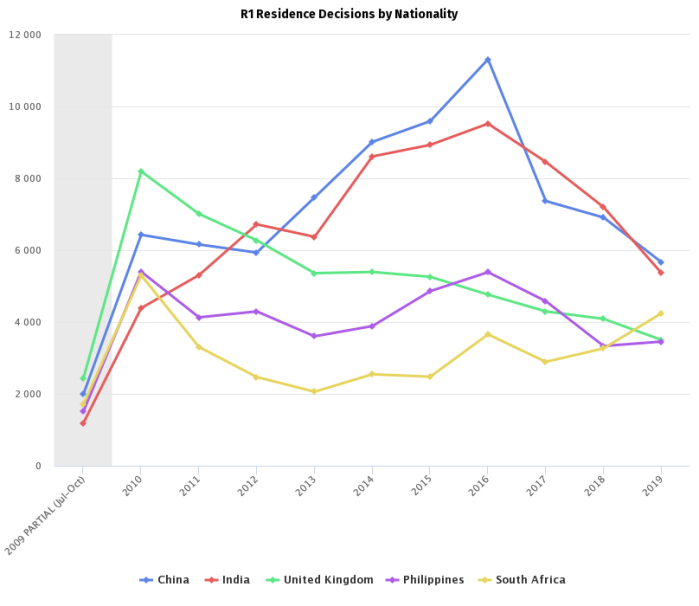 Four of these five countries are materially poorer than New Zealand is (and the UK, once the leading individual source country, while richer and more productive is now down to equal 4th).  Mostly people migrate when (a) the options are better for them abroad, and (b) the potential recipient country allows them to do so.  That seems pretty consistent with the New Zealand story not just now, but throughout history (think of the UK migration from say 1870 to 1970, a period when wages here were typically higher than those in UK, or of Pacific migration in the 60s and 70s).

And if there has been an increase in the (typically small) net number of US migrants since Trump, well there has been a fall in the net inflow of Brits since the Brexit vote. 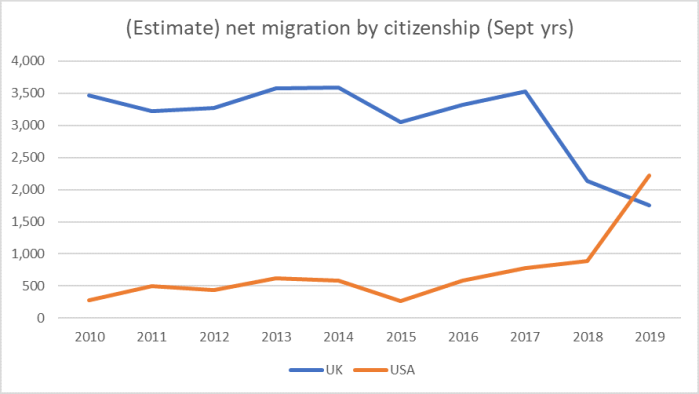 In combination, net arrivals from the UK and US are now about one-third of what we were experiencing from 2004 to 2007.   So much for the pulling power of the “woke paradise” rhetoric.

As just another area where our rules matter quite a lot, the MIBE data says that we now have about 200000 people here at any one time on temporary work visas.    In 2012 that number was about 100000.   That’s non-trivial share of the roughly 500000 growth in population (all needing accommodation etc) in that period.

Towards the end of his article, Dann’s sunlit uplands narrative continues

Now more than ever New Zealand has some control over that destiny.

We can choose to turn the immigration tap up or down with policy settings.

We have choices because we can rest assured that the demand is there.

Except that for most of the last 150 years it has been so.  When you are a relatively rich country –  and one that is not given to coups or civil wars and speaks the global language  – of course people will want to come.  In what we often think of as the dark years of the late 70s and early 80s plenty of people would happily have come, it was just that we chose not to let them (and reasonable people can debate that economic or social merits of that choice).    We could elect the antithesis of Jacinda Ardern and while Colbert, the Guardian and the Washington Post might not like it, it wouldn’t materially alter the broad level of interest in moving from a much poorer country (eg India, South Africa, Philippines) to quite a rich (if remote) one.

I remain convinced that we would be better off economically, and probably politically/socially as well, to be targeting a much lower rate of non-citizen immigration (perhaps 10000 to 15000 residence approvals per annum).  If we did, the population would probably level out near five million.   Without compelling evidence of incipient rapid productivity growth –  of the sort missing for at  least 70 years –  that would play better to the limited economic opportunities in this remote corner of the world.  And, as it happens, it would leave us not far below the size of the median country globally.

As it is, the existing planning ranges for residence approvals expire at the end of this year.  As I highlighted earlier in the year, the government is apparently looking at quite an overhaul of the system (although no hint they were looking at lower numbers).  The number of Cabinet meetings before the end of the year must now be dropping away quite fast.