A passing comment in a post the other day about the labour force participation rates of older people prompted me to pull down the fuller data and see what we could see about various participation rates over the decades since the HLFS began in 1986.   As it happens, the unemployment rate in 1986 averaged 4.2 per cent, exactly the same as the current unemployment rate, so cyclical factors shouldn’t materially mess up long-term comparisons.

Here are the quarterly participation rates (employed plus unemployed as a percentage of the working age (15+) population.

From which I’d make only three quick observations:

But aggregates can mask a lot of interesting patterns, and around participation rates that has been particularly so for men (the female participation rates are just dominated by the strong upward underlying trend).   From here on, I’m using annual data (years to September), as there is less noise and more data reliability for some of the small age groupings.

Here is the data on participation rate for what you often see referred to as “prime age” people, those aged 25-54. 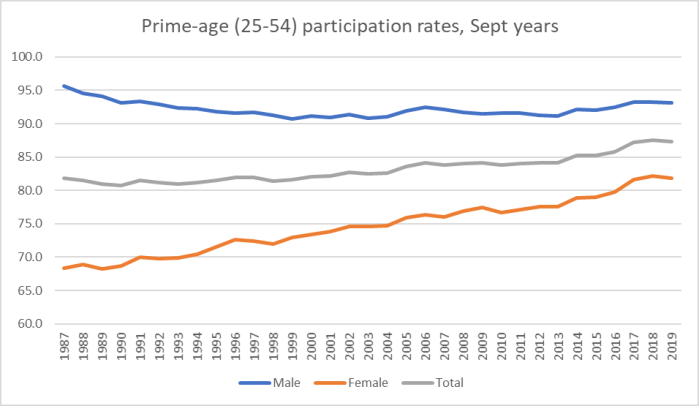 Prime-age male participation isn’t back to where it was in the 1980s but over the last couple of years it has been higher than the 2000s peak.

What about the two youngest age bands?

In the 1980s (until 1989), people could leave school at 15, but I was interested –  and a bit surprised –  in the further step down in the participation rates of the 15-19 year olds ver the last 15 years or so.  Presumably there is some mix of factors at work: kids being less likely these days to have after-school jobs that was once the case, minimum wage changes, and……  Given the cost of tertiary education now (relative to say the 1980s) it still surprises me though.

Perhaps the bigger surprise though (at least to me) is that only around 80 per cent of 20-24 year olds are in the labour force.  You only need to have done one hour’s paid work in the reference week, or to have actively looked for work, to be included in this measure.

What sparked the post initially was participation rates of those in the older age groups.  Here are those for the 55-64 age. 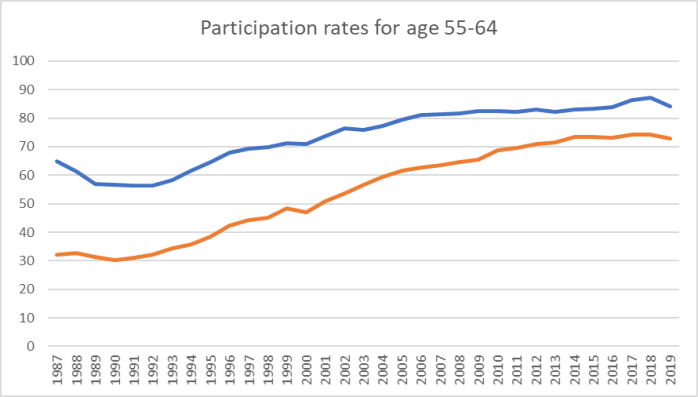 Participation rates for this age group are much higher than they were for both men and women.   When the data start, the full rate of New Zealand Superannuation was available at age 60 (at, if I recall correctly, a higher rate relative to wages than is the case now).  I was a little surprised to note the dip in participation rates in the last couple of years: for this group of women the latest observation was lower than in any year since 2013.

And what about the participation rates of those 65 and over, almost all of whom have been eligible for NZS throughout?

There has been some increase in participarion rates for those aged 70 and over, but the really striking movement has been in the 65-69 age group.   More than half of men, and almost 40 per cent of women, in this first NZS recipient age group, are still in the labour force. (Interestingly, the gap between male and female participation rates for this age group hasn’t materially changed over the 30+ years of the chart.)

In my post last week, I noted that the participation rates of those now aged 65-69 were higher than those for people aged 60-64 when the survey started, at a time when the NZS eligibility age was still 60.    I see this as a fact buttressing the case for raising the NZS eligibility age now (to, say, 68, and life expectancy indexing beyond that).  By some mix of revealed preference to work, and of need, large proportions of the population went on working for some years after being eligible for a universal pension, suggesting not only that they were physically capable of doing so, but that many of their peers who chose not to work would also be physically capable of doing so.

However, the comparative story over time is complicated at least a little by changing norms and expectations around female participation.  In 1987 under 20 per cent of women aged 60-64 were in the labour force: these were women born in the 1920s, (mostly) mothers of the first baby boomers at a time when female prime-age employment wasn’t that common.  Now almost 40 per cent of women 65-69 are in the labour force, almost as high a share as for the 60-64 year old males in the late 80s.    The increase in participation rates among males – today’s 65-69 year old compared with 1987’s 60-64 year olds is real, but less dramatic  –  up from just over 40 per cent to just over 50 per cent.

And just to end, a couple of international comparisons charts re participation rates for those aged 65-69.

Here is the participation rate in 2018

It really is an astonishing range.   It isn’t correlated with prosperity (there are poor performers at either end of the chart) or, that I could see, with life expectancy or health status.  I suspect –  but haven’t checked –  it is pretty strongly correlated with the abatement regimes (if any) around state pension.   One of the best things about the New Zealand system is that although NZS provides an income effect encouraging people to think about stopping work, there is no relative price or substitution effect: as an older person you can work as much as you like and it doesn’t affect how much NZS you receive.  In many countries, the rules aren’t like that; it often isn’t economically attractive to go working.

And what about the change over time in the proportion of those 65-69 in the labour force?  The OECD has complete date only since 2002 so here is the change since then. 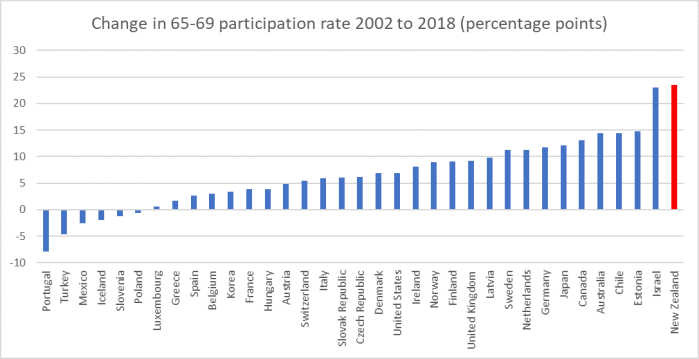 What I found interesting about that statistic for New Zealand is that that further large increase in the 65 to 69 participation rate has been exclusively in the years since the NZS eligibility age got to 65 (in 2002).  You can see in the chart above that our participation rates for those 60-64 also increased markedly over that period.

I’m not one of those inclined to celebrate (paid) labour for labour’s sake. I don’t think I was when I was in the paid workforce and I’m certainly not now.  But when the alternative is state income support then I do take a harder line view.  If you are able to work and are financially able not to, that is almost entirely a matter of individual/family choice, but you (generally) shouldn’t be eligible for long-term state income support.  New Zealand’s experience suggests that the overwhelming bulk of those aged, say, 65-67 are well able to work (we don’t have the data, but presumably –  given what happens from 70 on (see above) –  participation rates of those 68 and 69 are materially lower than those for people 65-67).   Against that backdrop, there is something just wrong about having a universal pension paid to them –  well, me not that many years hence on current policy –  simply on the basis of having got to that age.

Fans of a Universal Basic Income will, of course, not agree.  I am not a fan, having both practical and moral objections to a UBI.