One of my kids is quite sympathetic to ACT.  So when the news emerged yesterday that ACT was adopting NZ First policy, and calling for a reduction in the size of Parliament to 120 MPs, we had a bit of a chat and I offered a few alternative perspectives.

One of those alternative perspectives is captured in this nice chart from a Czech mathematican and blogger. 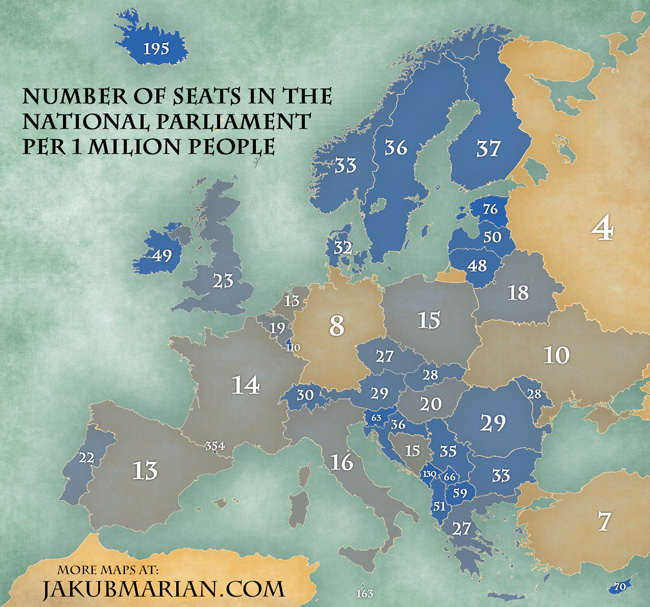 New Zealand has 120 MPs and a population of 4.9 million.  In other words, 24.5 members of Parliament per million people (a number that is dropping quite steadily given our relatively rapid population increase –  in 1993 when MMP was voted in, 120 MPs was equivalent to about 33 MPs per million people).

Look at that Europe chart, which helpfully includes numbers for some of the very small countries.

Of the large democratic countries (Spain, France, UK,  Italy Germany, Poland), the average number of members of Parliament (upper and lower house) is about 15 (and even that number is skewed up by the part-timers in the House of Lords),  Ukraine, Russia and Turkey –  big countries, if not always terribly democratic –  also have a small number of MPs per capita.

And what of the very small countries?   Iceland, Luxembourg, Andorra, Malta, Montenegro, Cyprus.  Among those countries, the median number of members of Parliament per million people is over 100.

And what of countries very close to New Zealand in size?  There are six EU countries with between four and six million people.  Here are the number of members of Parliament per million people in each of them, as per the chart above

I could go on, but I’m sure you get the point.   Big countries have lots fewer members of parliament per capita than very small countries, and of the advanced European countries around our size all have more MPs per capita than we do.   There are outliers and exceptions of course  –  among advanced countries Israel (also with 120 MPs and more people than we have) is one.   But I suspect ACT and NZ First would struggle to find a useful cross-country metric that suggested we had too many MPs.    And unlike most of the larger countries, we don’t have federal system, so there are no state-level MPs.  And there is no second (reviewing) chamber.

It seems perfectly sensible to expect that the number of MPs per capita will be diminishing quite a bit with population.  There are economies of scale to many of the more critical functions we expect from our members of Parliament.  In fact, the same goes for many central government functions (central banks, diplomatic services, supreme court and so on).

You might think that there are too many minister and under-secretaries –  something I do agree with ACT on  –  but even Mr Seymour’s proposal of 20 would give us a ministry about the same size as the Cabinet in the United States or the United Kingdom.   There are certain number of jobs that need doing even if you are a small state.  Just as local councils in towns of 20000 people still have many of the same functions as the Auckland council.

But staffing the executive ministerial roles probably isn’t the most important role of Parliament.   At least as important is the challenge and critical scrutiny that MPs can and should provide on legislation, on the performance of ministers, and on the performance of government agencies  (there are, inevitably –  and even in Mr Seymour’s small government world –  many of them, through which all-too extensive powers are exercised).

In particular there is the work of select committees.   Select committees in New Zealand are poorly resourced, but even members of select committees are typically spread very thinly.  Scrutiny – whether of proposed legislation or of ministerial/agency performance –  doesn’t happen with anything like the regular depth or intensity it should.  And that isn’t because individual MPs are slackers –  most appear to work excruciatingly long hours.

Add in issues around competence and incentives and it reinforces the case that we have barely enough MPs.   Of 120 MPs, inevitably some will be duds –  people who got on the list, or won local selection, for reasons that have nothing to do with their ability to be effective legislators, or those holding the executive to account.  Likeability, or to keep someone else out.  Fundraising or ticking diversity quotas, for example.  Others linger beyond their use-by date.  (None of this makes Parliament necessarily much different from many other workplaces.)

On the government side, senior roles on important select committees are typically filled by people who are (a) well-regarded by their seniors, and (b) on the fast-track into the ministry itself.  Not a recipe for consistent critical scrutiny.   The chair of the Finance and Expenditure Committe used to be such a role –  now made worse in that both the chair and deputy chair this term are already under-secretaries, and even less likely to want to make life awkward for their colleagues.   Things are different on the Opposition side (making life difficult for the government is a big part of your reason for being), but parties typically get into Opposition after losing an election –  at which point, from both the individual and the party, there is pressure for turnover, and so a lot of experience is lost.   We don’t have much of a hinterland of people who either were ministers and are so no longer, and have been content to find a niche as, say, a select committee chair, bringing experience and a not-much-to-lose perspective to bear including in holding their own senior colleagues to account (as seems to happen in, for example, the UK).   We seem to have a Parliament of people for most of whom being a minister is the focus of ambition.   And with 120 MPs, that is realistic ambition for many/most.    I’d argue that what we need is more able people who want to be very good select committee operators, and perhaps even compelling speakers in the House itself.

Perhaps there are other papers, but in a quick look I found a piece from 2007 looking at the cross-country relationship between population and number of MPs.   The authors find a power law –  number of MPs per capita diminishing with population –  holds, and end up classifying countries into five groups, one of which includes New Zealand

As I noted, when MMP was voted for it involved 33 MPs per million people.  In 1951, after getting rid of the Legislative Council, we had 80 MPs ( 42 MPs per million people).  Even allowing for some economies of scale, it is far from clear that there is a credible case for reducing the number of MPs, even if (and here I sympathise with Mr Seymour) one did favour less regulation, less legislation, and a smaller role for government.

None of which is to defend our MPs from the generally appalling job they have done for decades, presiding over our steady relative economic decline (and the many other failures people could list according to taste).  But demolishing one wing of the house –  chopping out 20 MPs –  isn’t going to fix that problem.