The Reserve Bank was out the other day with some research on the impact on house prices of the successive waves of loan to value limit restrictions put in place from 2013 to 2016.     It was a rare Reserve Bank discussion paper –  pieces typically designed to end up in a journal publication –  to get some media attention.   That was, no doubt, because of the rather bold claims made in the non-technical summary to the paper

Overall, we estimate that the LVR policies reduced house price pressures by almost 50 percent. ,,,,, When it becomes binding, LVR policy can be very effective in curbing housing prices.

Since nationwide average house prices (QV index measure) increased by about 40 per cent over the four years from September 2013 (just prior to the first LVR restrictions coming into effect) to September 2017), you might reasonably suppose that the researchers were suggesting that, all else equal, LVR restrictions had lowered house prices by almost 40 per cent (in other words, without them house prices would have increased by around 80 per cent).  Of course, that isn’t what they are claiming at all.

The paper was written by several researchers in the Bank’s Economics Department (two of whom appear to have since moved on to other things), and carries the usual disclaimer of not necessarily representing the views of the Bank itself.  Nonetheless, on an issue as contentious as LVRs, it seems safe to assume that senior policy and communications people will have been all over the communications of the results.  Even if the Governor himself didn’t see it, or devote any time to it, it seems likely this paper carries the effective imprimatur of the Assistant Governor  (Head of Economics),  the Deputy Governor (Head of Financial Stability) and (at least in the bottom line messages) the Head of Communications too.

In the paper, the authors attempt to identify the impact of the various waves of LVR controls using (a) highly-disaggregated data on property sales, and (b) the fact that shortly after the first LVR restrictions were put in place, the Bank buckled to political and industry pressure and exempted lending for new builds from the controls (even though, generally, such lending is riskier than that on existing properties).  By looking at the relationship between prices of new and existing properties before and after the various adjustments to LVR limits, they hope to provide an estimate of the effect on existing house prices of the LVR controls.

Trying to identify the statistical effects of things like LVR controls is hard, but I’m a bit sceptical of this proposed new approach.  After all, if new and existing houses were fully substitutable a new regulatory intervention of this sort could be expected to affect prices of both more or less equally.  People who were more credit-constrained (by the restrictions) would switch to buying new houses, and those who less affected by the contros (eg cash buyers) would switch more to existing houses.

In practice, of course, the two aren’t fully substitutable, for various reasons (including that most new builds are occurring in different locations –  even in the same TLA – than most existing houses), but in the Reserve Bank research paper I didn’t see any discussion of the issue at all.  If there is no substitutability at all then the research approach looks as though it should be reasonable, but that seems unlikely too.

But I’m more interested in whether the reported results are anywhere near as impressive as the authors claim.

As a reminder, here is their chart of house price inflation developments, with the various LVR interventions marked. 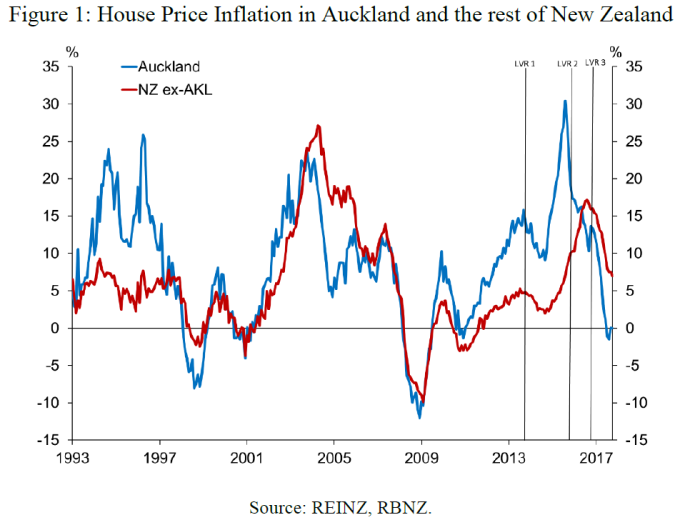 And here is their summary table of those successive interventions.

And here is their summary table of the impact of these LVR adjustments on house prices, as estimated from their model.

My focus is on the last two lines of the table: the estimated percentage effect on the various different intervention on existing house prices in Auckland and the rest of New Zealand  (the three asterisks suggest that the results are highly statistically significant).

Take the initial LVR controls first (which had the added effect of being something out of the blue, shock effects of a tool never previously used in New Zealand).  Recall too that, at the time, the big concern was about Auckland house prices and associated financial stability risks.    On this particular set of model estimates, the effect on house prices outside Auckland –  where there wasn’t a particular problem –  was larger than the effect inside Auckland.  In both cases, the effect (2 to 3 per cent) isn’t much different to previous estimates, or (indeed) to the sorts of numbers that were being tossed around internally before the controls were imposed.  It was generally expected that the controls would have a temporarily disruptive effect, lowering house prices for a while, but the effects would wear off over the following few years. (There are some model estimates on page 9 of this paper the Bank published in 2013.)

And what about the second wave of controls (which tightened financing restrictions on investors in Auckland, and eased them for everyone outside Auckland)?  On these latest estimates, those restrictions had no discernible impact on prices in the Auckland market at all, even though they were avowedly put in place because of explicit gubernatorial concerns about investor property lending in Auckland.  On, on the other hand, the moderate easing in the rules outside Auckland was so potent that it full unwound the price effects of the first wave of controls.

And, finally, the third wave of controls.  These represented a substantial tightening in investor-finance restrictions (especially outside Auckland), and a reversal in the easing (in wave 2) of the owner-occupier financing restrictions outside Auckland.   And yet, even though the rule changes were materially larger for borrowers outside Auckland, there is no estimated effect on house prices outside Auckland at all (even though, in wave 2 the easing in owner-occupier restrictions, now reversed, was supposed to have had a large effect).  And although the Auckland rule changes are smaller those outside there is no estimated effect on Auckland prices at all.  These results aren’t very plausible and suggest that – even if the results are statistically significant –  the strategy they used to identify the effect on prices isn’t that good.

One could also note that if one added up the effects across the three columns (which isn’t kosher, but still…….) the total effect outside Auckland is basically zero (actually slightly positive).  Even in Auckland, the total is about 5 per cent.

One of the reasons why simply adding up the estimated effects isn’t kosher is because everyone has always recognised that LVR restrictions are unlikely to have long-term effects on house prices.  They disrupt established established financing patterns, and thus can dampen house prices a bit in the short-term, but the effects dissipate with time.

In fact, the Reserve Bank researchers illustrate exactly that point in this chart which (if I’m reading them correctly) relates to the first wave of LVR controls.

As the authors themselves observe

Figure 5 plots the point estimates with 95 percent confidence intervals. Overall, the effect of the first LVR policy on house prices occurs within the first three months and is relatively stable over a six-month period. Thereafter, the moderating effect declines somewhat (to around 1.5 percent after 12 months), perhaps owing in part to individuals having saved up the required deposit under the policy and a price differential having opened up between existing and newly built houses.

To be fair to the Bank, and the former Governor, they never claimed house price effects would last for long.  The argument was that LVR restrictions reduced financial system risks by altering the composition of bank balance sheets.  That is another contentious claim, but it isn’t touched on in the current paper and so I won’t deal with it further here either.

So what led them to write (and their bosses to approve) the extravagant claim that LVR policies reduced house price pressures by almost 50 per cent?    It seems to be this

The moderating effect of LVR 3 was clearly seen in Auckland with a 2.7 percent reduction in house prices. This LVR 3 effect is both statistically and economically significant, as during the same period the average house price increased by 5.8 percent.

Contrary to their claims, LVR policy is not very effective in curbing house prices.  Indeed, its staunchest advocates never really claimed otherwise (for them it was mostly about financial stability), which does leave one wondering why today’s Reserve Bank management are publishing such overblown (and undersupported) claims to be made.  As I noted earlier, over a period when nationwide house prices rose by about 40 per cent, this latest model suggests no sustained impact at all on house prices outside Auckland –  despite significant interruptions to established financial structures and effective property rights –  and probably quite limited effects in Auckland too.

Overblown claims about what LVR controls can do for house prices (especially with no discussion at all of efficiency/distributional costs etc) risk distracting attention from the real regulatory failures that explains the dysfunctional housing market.  And they also detracting from the credibility of the Reserve Bank, whose legitimacy depends in part of being authoritative when it speaks.