I noticed the other day a short piece on Treasury’s blog, written by one of their very able analysts, Mario di Maio, headed “How to get an export take-off“.  It appeared to be prompted by the government’s now long-standing target to raise the export share of GDP by 10 to 15 percentage points by 2025.  As I’ve noted before, the general sentiment behind the goal is probably broadly sensible –  successful economics typically trade more (imports and exports) with the rest of the world.  After all, the rest of the world is where the bulk of potential customers/suppliers are.  Of course, the problem with this particular goal is that (a) it doesn’t look as though it is going to achieve itself (good bureaucratic technique can include setting goals for things that were likely to happen anyway, and then claim the credit when they do), and (b) the government is doing absolutely nothing to bring about the sort of transformation of the economy that might reasonably be expected to lift the export (and import) share of GDP.  It is an old line, but no less true, that it is pretty crazy to keep on doing the same old thing, and expecting a different result.   So perhaps they don’t really expect a different result….and perhaps they don’t even care greatly, as by 2025 no doubt the government will have changed, perhaps more than once, and Key, Joyce and English will be doing something else (as Clark and Cullen –  who had similar vague aspirations –  are now).

The Treasury note is worth reading. It takes a quick look at some countries (all now advanced) that have achieved a 10 percentage point increase  in 10 years in the export share of GDP over the last 50 years or so.  The author finds 14 such countries, and has a quick look for any common factors.  Perhaps not surprisingly –  in a note of three pages of text – he doesn’t find many.  Indeed, he goes so far as to conclude

The diversity of the case studies cautions against drawing simple policy lessons from other countries for any New Zealand strategy to lift trade intensity. The diversity of approaches and circumstances means any single policy (or policy mix) would be misleading.

Personally, without a lot more background analysis –  and perhaps Treasury has done the analysis but just not published it – that seems too strong a conclusion.  If one were uncharitable, it could be seen as tending to avoid the real issues that specifically help explain New Zealand’s underperformance.  But perhaps that wasn’t the intention at all, and all they really mean is that we have to think hard about the specifics of New Zealand, and not simply latch onto one or other favoured overseas country as an example. If so, I agree.

I’m not going to use this post to pick at specific points in the Treasury note, but wanted to come at a similar issue in a slightly different way.

But first, lets remember quite how underwhelming New Zealand’s international trade performance has been.  This is a chart I ran a few months ago, comparing New Zealand and other small OECD countries since 1970.

The foreign trade share of GDP has gone basically sideways for almost 40 years.  It is hard –  but not impossible –  to get ahead with a performance like that.

I usually use OECD data –  as in the chart above –  but the Treasury piece used the World Bank data, which has some advantages in capturing a wider range of countries.  For some countries, and aggregates, they also have data going a bit further back.

Here is the World Bank’s estimate of exports as a share of GDP, for the whole world and for the OECD, back to 1960.

Over the 40 or so years when the export share of New Zealand’s GDP has barely changed, that for the OECD and the world as a whole has increased by between 10 and 15 percentage points.  The trend –  world, and advanced countries –  has been strongly upwards, and somehow we’ve managed to defy that trend.    Not all of that growth has been in export value-added, some has been the rise of global supply chains and the increased cross-border trade in componentry –  something that is never likely to be a feature of remote countries’ trade –  but that isn’t the bulk of the story by any means.

From the World Bank’s data, I picked out the advanced countries (OECD plus a few others), the emerging Asian countries, and Latin American countries (the latter mostly because they fascinate me, but also because they add a large number of countries that have underperformed for long periods).  The official New Zealand export data start in 1971, so I had a look at how the export shares of the countries I had data for had changed from 1971 to 1975 to 2011 to 2015.  Using five-yearly averages gets rid of some of the noise that arises from short-term exchange rate or commodity price fluctuations.  Data don’t go back that far for most of the former Communist countries of Eastern Europe, but I was still left with a sample of around 45 countries.

Of those countries, only Norway could be counted as am unambiguous economic success story over that period.  All the others –  like New Zealand –  were underperformers at best.  One might make an exception for Japan –  until the late 1980s its economic performance was very strong – but then it is also worth remembering that at the start of the period exports as a share of GDP in Japan were only around 10 per cent of GDP (less than half of the export share in a small country like New Zealand).  Over the period since the early 1970s, Japan has increased the export share of GDP by almost 50 per cent (from around 10 per cent to around 15 per cent) while the increase from New Zealand has been only around 25 per cent.

The Norway experience is a reminder that a large export (and import) share of GDP is not a necessary conditions for a sustained acceleration in economic (and income) growth.  Then again, countries can’t count on discovering a huge new extremely valuable natural resource as a basis for improved prosperity.  Typically the path to prosperity involves firms finding products and services they can sell successfully to the rest of the world. We’ve failed on that count, and that shows no sign of changing.

But as everyone knows, New Zealand’s productivity performance over decades has been lousy, among the very worst in the advanced world.  Sure we have a few years from time to time when things don’t look too bad, but the multi-decade pattern of underperformance is clear and shows no sign of reversing.  Against that backdrop, it seems not just plausible –  but entirely reasonable –  to suggest that a real exchange rate that has been high or rising (rather than weak and falling) will, in the specific context of New Zealand, have been the main proximate contributor to the weak foreign trade performance (exports and imports).

I ran this chart recently.  It only goes back 20 years, but over longer periods the picture is much the same.  Our relative productivity performance deteriorated, but our exchange rate didn’t sustainably fall. 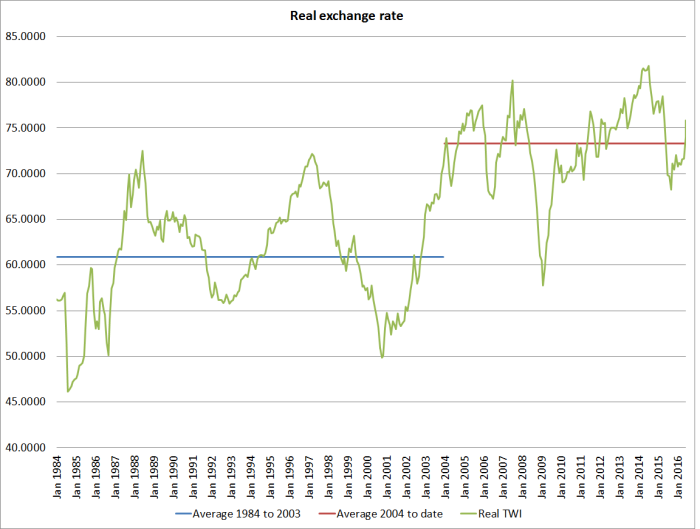 That sort of pattern typically happens only when some sort of domestic demand pressures keep holding up the real exchange rate (and domestic real interest rates).  In a country with a modest national savings rate, government policies that result in rapid population growth are an example of just such a pressure.   It is hard to foster an environment in which exporting is profitable/attractive when so much resource constantly needs to be devoted to meeting the (individually entirely reasonable) needs of a rapidly growing population.

Of course, “the exchange rate” can’t be fixed in isolation.  It is a symptom of what else has gone wrong with the policies of successive governments.  But like the old canary in a coal mine, the persistently strong exchange rate –  in a country of such persistently weak productivity growth –  is supposed to be a warning signal that something about economic policy is very wrong.

But why would we be surprised that nothing changes?  The Opposition appears to have no compelling analysis or ideas, and we have a government run by a Prime Minister who in a recent interview declared that

Where would chairing the UN Security Council rank in your career highlights?

Right up near the top

I guess when there have been eight years of no substantive economic reform, no progress in improving the relative performance of the New Zealand economy, no progress in reversing decades of relative economic decline –  just the pretence that somehow we are a global economic success story –  we shouldn’t be surprised that chairing an ineffective meeting of foreign officials and ministers, dealing with an intractable problem in a far-away land, counts as some sort of career highlight.

Young New Zealanders, facing unaffordable houses, and  the prospect of growing up in a country slowly drifting ever further behind, might perhaps have hoped for something rather more tangible rather closer to home.