Back in mid-2009, just as the first glimmers of recovery  from the severe recession were emerging, the Reserve Bank launched a credit conditions survey (of lending institutions).  It was a sensible enough initiative but, to be honest, I never paid much attention to it.  We knew conditions had got very tight during the recession and (at least in my remaining time at the Bank) the data weren’t that interesting –  of course credit conditions were easier than they’d been in the midst of that financial scare, and when there were changes shown they were for pretty obvious reasons (eg access to housing credit was reported as tightening when the Governor imposed LVR restrictions).   Also, the number of institutions covered was quite small, and one had to worry that results could be affected by who happened to fill out the form in a particular institution on a particular occasion (plus, when reporting to your prudential regulator incentives aren’t entirely straightforward).

There is a series of questions about:

That makes for lots of series.  I’m less interested in the demand side, which is largely going to reflect stuff we see captured in other data (eg housing turnover, business surveys etc).  But demand for new business loans does seem to have fallen away somewhat in recent years.

But what about the supply side?

Here is observed credit availability over the last six months (the survey is six monthly) for the four business sectors (there was no particular change in availability to households).

And here is what respondents expect (presumably from a position of knowledge, responsible for something around overall credit within their own institution).

Yes, there is some idiosyncratic variability in the response at times, but in the ten year history of the series we’ve seen nothing like the tightening in expected conditions observed in the last few quarters, now across all the business classes (there is little movement on the mortgage and personal household lending categories).

It isn’t easy to know quite how much weight to put on these responses –  for a start, with only one incomplete cycle of observations, we have little idea of “normal” variability as economic conditions turn down.  But as the recent downturn is larger than the post-2009 upturn (coming off a pretty savage tightening in conditions) it doesn’t have the look of something that should be quickly glossed over.   It looks to represent a potentially quite material tightening in monetary and financial conditions.

The other question they have about actual credit availability might also tend to confirm that unease.  Respondents are asked about how credit availability is now compared to the past three years (I guess to smooth through idiosyncratic influences on the past six months).  Here are the responses for the business sector loans (household was directly and materially affected by the waxing and waning of LVR restrictions, a policy intervention).

Again interesting that there had been little movement re SMEs, but for the other three business categories the scores are getting back towards levels we saw just after the last recession.

Early last year the Reserve Bank did a welcome extension to the survey and started asking respondents about the influence of various specific factors that could reasonably influence credit availability.  Here are answers. 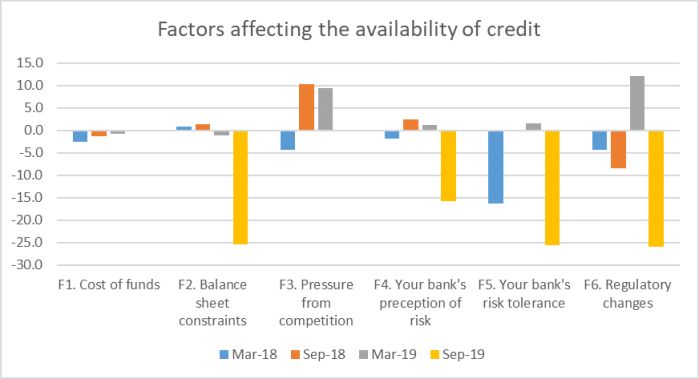 Cost of funds hasn’t been an issue in changing credit availability (nor would you really expect it to be –  should affect price rather than availability), and neither has competitive pressure, but look at those four striking negative yellow bars.    Risk appetite among the lenders, risk capacity, and (distinctively) regulatory changes have all worked to (apparently materially) tightened credit conditions.

Sadly, here we reach the limits of the survey. It would be fascinating to be able to disentangle quite what is going on.  There is a quite plausible story that all three of the other negative yellow bars are primarily a reflection of the fourth, regulatory change (presumably the Governor’s capital whims).  Perhaps it isn’t so, and there are independent reassessments of risk and willingness to bear risk going on in head offices, whether here or in Australia, but whatever the precise combination of factors it is pretty likely that regulation is already weighing fairly heavily on credit availability in New Zealand. (I only qualify that claim a little because banks perhaps have an incentive to play up the issue, knowing that the Governor is about to make his final capital decisions, but I doubt that is more than a marginal factor here, given the small number of respondents and the ability of the Bank to query each).

You may recall the consultation document the Bank published almost a year ago on the Governor’s proposals to greatly increase capital requirements for locally-incorporated lenders.  You may not recall the discusssion of these sorts of effects, let alone the apparent differential sectoral effects.  That isn’t the fault of your memory.  There just was no discussion of those issues in the document.  Which seemed odd at the time, and even more extraordinary now.  It will be interesting to see how the Governor responds to these data in his two scheduled press conferences in the next few weeks (MPS and FSR).

While these data are clearly of some relevance to the bank capital debate, my main interest in them was in the more immediate issues around the appropriate stance of monetary policy and the setting of the OCR.   There appears to have been quite a sharp change in market sentiment/pricing and the views of some market economists this week on the chances of the Bank cutting the OCR on 13 November (the reasons for that change still aren’t fully clear, and one is left wondering if the Bank has been signalling –  by accident or design –  some change in its own view).

My interest is much less in what the Bank will do in the short-term, but in what they should do (which should, of course, make my commentary of interest to the Bank, given the Assistant Governor’s speech the other day, but…..).  “Will” and “should” eventually tend to converge, but it can take some considerable time for them to do so.

But if we grant that this credit conditions data is material the MPC did not have when they did their August forecasts, or made their slightly panicked last minute decision on a 50 basis point cut, and did not even have at the last OCR review, it really should be  colouring the projections they finalise next week (even if the variable might not feature in their formal models).  Add in own-activity business survey data that has shown no signs of rebounding since August, inflation expectations that have either fallen further (surveys) or remained very low (inflation bond breakevens), and a core inflation rate that remains consistently materially below the (focal) midpoint of the inflation target, the case for not cutting the OCR in November seems weak at best.  There isn’t another review opportunity until February, the world situation (if not one of sentiment spiralling downwards) seems no stronger substantively, and for a committee that was sufficiently rattled to do a 50 point cut only three months ago –  and not to have seen anything much improve since then –  to do nothing now would only further muddy the communications waters, leaving people even less clear about how the MPC thinks, or that there is a consistent and disciplined process at work, secreted away from the public/market spotlight.

(Bearing in mind that there is still some material local data to be released before 13 November) the risks around a further OCR cut in November at present look quite asymmetric.  As we drift closer to the next recession, and to the limits of conventional monetary policy, the very best thing that could possibly happen would be positive surprises on core inflation, spilling over into somewhat higher inflation expectations.  People are no longer convinced inflation will settle at 2 per cent or above. It would be better, for almost everyone (certainly for the management of the next downturn) if they were.   When credit conditions appear to be tightening quite materially –  and that even before the final decisions are announced –  getting that sort of outcome will be made harder than necessary if the Bank ends up setting on its hands, confusing messaging, all for what?  So that the Governor can get some perverse psychic satisfaction from surprising people again?   Unpredictability is not a desirable feature of public policy.

One thought on “Credit conditions”