Skip to content
HomeProductivity growth across countries across time

The chart is from the latest weekly column from Martin Wolf, the economics columnist for the Financial Times.   It is a sobering reminder of what has been happening among economies rather nearer the frontier: productivity growth recently isn’t what it once was (even if the 50s and 60s are hardly representative historical decades).

But, of course, my main interest is in New Zealand.  And for OECD countries I prefer to use OECD data (which go back only to 1970).    Here is what a similar version of the chart above looks like using OECD data and adding Australia, Canada and New Zealand.   As with the chart above, I’ve ordered the countries from high to low based on average productivity growth in the most recent period (in this case, the last five years). 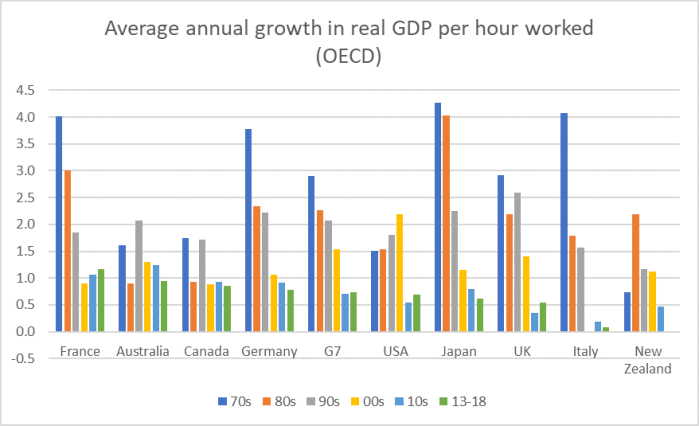 In that most recent period (and, actually, for this decade as a whole) France has had the fastest productivity growth –  not something I’d have guessed –  and New Zealand brings up last place.  It isn’t that the green bar is missing for New Zealand, just that the average annual growth rate on this measure was 0.0 per cent. (Using my preferred measure of labour productivity growth, updated to include this morning’s release we do a little better for the last five years –  we come second to last (ahead of Italy) instead.)

And, of course, the pattern for New Zealand is a little different because we had that truly dreadful decade in the 1970s, when our productivity growth was clearly the worst in the entire OECD.

But here is how we’ve done simply relative to the G7 group as a whole. 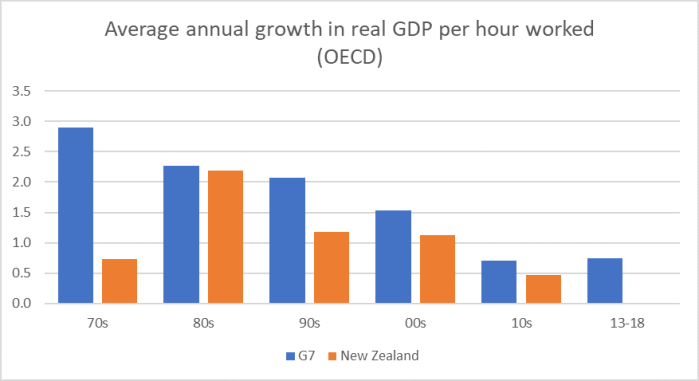 That could have been New Zealand too –  after all, we now start so far behind the leading bunch –  but policy choices by successive governments (much the same regardless of which party occupies the 9th floor of the Beehive) meant it wasn’t so, and left us vying with places like Italy, Portugal and Greece (even the UK) for the unwanted poor performer award.

17 thoughts on “Productivity growth across countries across time”