Just yesterday I wrote, in response to a comment, that

My point simply was that there is no obvious correlation, in the cross section, between population size and GDP per capita (or productivity). I’m not aware of any serious observer arguing otherwise

At the level of very simple correlations, I’d illustrated this lack of relationship –  whether for all countries, just advanced countries, excluding the handful of extremely large countries, or whatever.  Bigger countries (by population) don’t, on average, have higher per capita incomes than smaller countries.

But then I went to a seminar at the Productivity Commission yesterday afternoon, attended by various private and public sector people.  The substance of the seminar –  a new MBIE report on the manufacturing sector, and the discussion of it and of possible policy responses –  is embargoed until David Parker releases the report next week.   But I hope I’m not breaching any rules in simply reporting that I noted around the room an almost unquestioned acceptance that size (small) is one of New Zealand’s economic problems.  Normally I might barely have noticed it, but having been writing about the topic in the last few days, it niggled away at me.

The more I’ve thought about that issue over the years, the more I’ve concluded that those who hold it are simply wrong, and perhaps in the thrall of the political equivalent of Keynes’s “defunct economists”  –  the long tradition of political leaders, dating back at least to Vogel, who’ve wanted, as a matter of policy, a lot more people in New Zealand, believing (presumably) that New Zealanders would be better off as a result.  There doesn’t seem to be much –  any? –  evidence in support of any economywide economic benefits flowing from this preference.

One hears talk in such discussions of ideas like “markets work better in big economies”, or even talk of economies of scale –  or opportunities for specialisation – in government/regulation.  In principle, the arguments sound plausible enough.

But they rarely seem to confront the simplest stylised data.  For example, Australia and New Zealand are almost equally remote (on standard measures), but Australia’s population has been consistently much higher than ours, and yet for a century (say 1860 to 1960) material living standards (GDP per capita) were much the same on the two sides of the Tasman.

Or we could look at some advanced countries where distance/remoteness is much less of an issue.  In what follows I’ve looked at the OECD member countries in Europe (continental plus the UK and Ireland).  There are 24 of them, ranging in population from Germany’s 82 million to Luxembourg’s 0.6 million.  Five of these countries – New Zealand’s size or smaller – didn’t even exist as independent states thirty years ago.

In this chart –  for 2016 –  I’ve ordered those 24 countries by population size and shown the real GDP per capita for each.  I’ve also shown the median (so not distorted by Luxembourg, or issues around Irish tax) for the group of countries with a population less than 10 million, and also the median for the large European OECD countries. 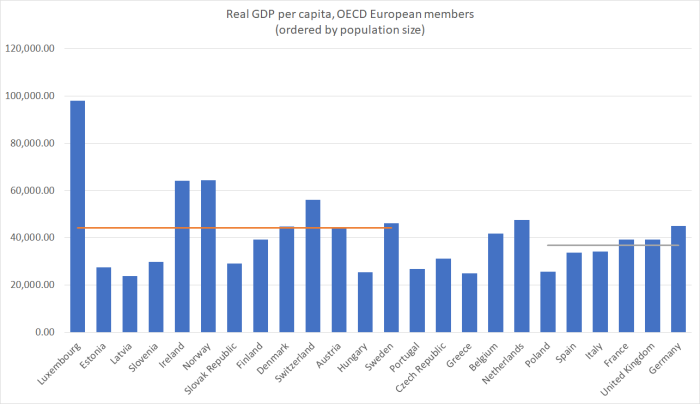 If anything, the typical larger country has a lower per capita income than the typical smaller country.  Of course, these are small samples, so not much weight should be put on them, but there is nothing to suggest bigger countries are performing better than smaller countries.  And if one insisted on excluding the former communist countries – even though they are now 25 years on as market economies –  the gap (in favour of the smaller countries) – is larger.

In many respects,  real GDP per hour worked  (labour productivity) is a better metric of economic performance.  Here is the same chart, for 2016, using the OECD’s data on productivity. 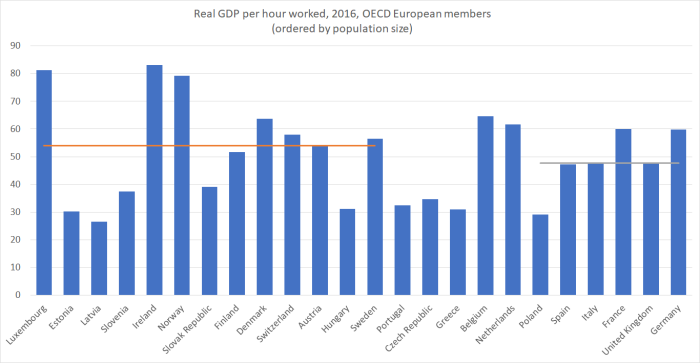 I could exclude Ireland and Luxembourg, I could exclude the ex-communist countries, I could add to the “small” category the countries (Portugal to Belgium) with populations just over 10 million, and it won’t change the story.  There is nothing in the simple stylised facts of European OECD countries suggesting that bigger countries do better than smaller ones.  Even at the most prosperous core bit of Europe (London is the richest –  by income –  region in Europe), Belgium, Switzerland, Denmark and Austria do really well.  And so do France and Germany (the UK less so).

Of course, there are lots of other things that help explain any individual country’s performance. Norway, for example, wouldn’t rank so high without oil, or Ireland without the features of its corporate tax policy which see a lot more economic activity booked in Ireland than directly results from economic activity occurring in Ireland.  One issue, of course, is the quality of policy.  There are lots of different dimensions of that, and sometimes one sees a story in which small countries try harder, regulate less, or whatever to overcome the alleged disadvantages of size.   One widely-used indicator is the OECD’s index of product market regulation.  As it happens, the PMR score for the median small country in OECD Europe is less good (ie more less-liberal regulation exists) than in the median large country.

Smarter people with richer datasets and serious econometric skills can produce much more complex models, encapsulating a lot more information simultaneously.  But whatever the results of such models –  which often end up depending on the modellers’ embedded assumptions –  it is always worth bringing them back to check against the simplest stylised facts.  Even in a region where distance is much less of a differentiator among countries (it isn’t nothing –  Portugal and Greece would have it tougher than Belgium and the Netherlands even with great policy) population size doesn’t seem to be an advantage, and isn’t associated with either higher GDP per capita or higher productivity.

For decades, I’ve used the line that if only we could detach New Zealand from the ocean floor and relocate it –  land and all –  in the Bay of Biscay, just off the coast of France we’d be much better off materially, all else unchanged.  Perhaps the North Sea would be even more propitious.  But the point remains, the biggest handicap to economic success in New Zealand is our distance/physical remoteness –  in an age when, across the board (although with individual pockets otherwise) distance isn’t becoming less of an issue, but perhaps even more of one.    A modest number of people probably can do very well here, but not many.   And yet our policymakers –  aided and abetted by official advisers –  keep driving policy to locate ever more people in a really quite unpropitious –  even if beautiful and (now) peaceful –  location.

There is simply no evidence supporting the notion that our small size is “the problem” (or even a material part of it), and when the story continues to be invoked it simply serves as a distraction –  mostly unwittingly so –  from a focus on the real issue, responding realistically to the unchangeable (absent quite different technologies) constraints of our physical isolation.