…in the productivity numbers that is.

Statistics New Zealand yesterday released the September quarter GDP data, including the revisions to the quarterly data that stem from the annual national accounts for the year to March 2016 that were published a few weeks ago.    Headline writers focused on the quite high rates of growth for the September quarter, while more sober observers allowed for the 2.1 per cent population growth in the last year and noted that in per capita terms real GDP growth remains pretty subdued.

I dug out the data to see if there had been any productivity growth.   As I’ve noted on several occasions, the labour productivity trend in recent years has been so weak it almost seems too bad to be true.  I wondered if the picture might look better with the new data.

In Australia, the ABS reports an index of real GDP per hour worked as one of the standard suite of published series.  In New Zealand, no such luck.  So I average the two measures of real GDP (expenditure and production) and divide by hours worked from the HLFS.  Unfortunately, Statistics New Zealand upgraded the HLFS earlier this year, and in the process introduced a break in the hours worked series.  There is a step up in hours worked that is partly on account of simply measuring things differently (and probably better).  Improvements in statistics are, of course, welcome but it is a little frustrating that the agency has made no effort to produce an official break-adjusted series.   In the June quarter, hours worked rose by 2.6 per cent.  As real GDP rose by 0.7 per cent, and there has been little sign of productivity growth in recent years, I’m going to assume in the charts that follow that 2 percentage points of that increase in hours was just a result of the change in methodology.  It won’t be quite right, but it doesn’t look likely to be seriously inaccurate either, especially against the measurement challenges and revisions we always face in looking at GDP/productivity. 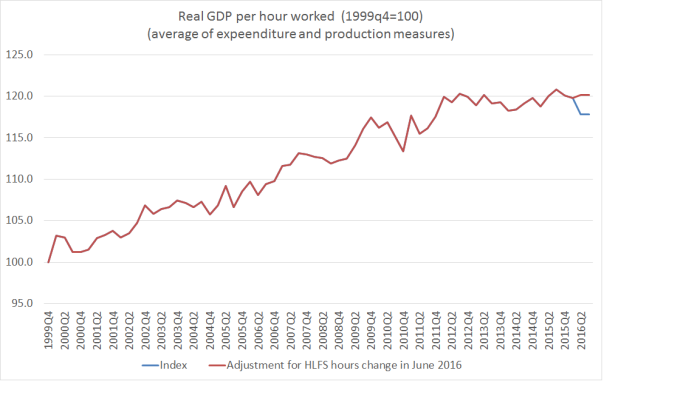 And, even with the data updates, there is still no sign of any material productivity growth.  It has been 4.5 years now since this productivity index got to around the current level.

There was plenty of gloomy commentary around the recent Australian quarterly GDP outcome, but in productivity terms  even after a poor quarter (in a series with some noise), Australia continues to pull away from New Zealand.  Here are the two GDP per hour worked series, starting from 2007q4, just prior to the New Zealand (and global) recession and the Australian downturn.

Our dismal productivity performance really should be getting more attention, and raising more concern, than it seems to.  But today isn’t the day for a long post on the underlying problems and possible solutions.

I’ll be taking something of a break.  There might be a few posts in the next few weeks, but something like a normal flow won’t resume until the week starting 30 January when the kids start going back to school.

In the meantime, in honour of Sunday’s Feast of the Incarnation (aka Christmas) I’ll leave you with this from John Milton’s poem

On the Morning of Christ’s Nativity
Compos’d 1629

This is the Month, and this the happy morn
Wherein the Son of Heav’ns eternal King,
Of wedded Maid, and Virgin Mother born,
Our great redemption from above did bring;
For so the holy sages once did sing,
That he our deadly forfeit should release,
And with his Father work us a perpetual peace.

That glorious Form, that Light unsufferable,
And that far-beaming blaze of Majesty,
Wherwith he wont at Heav’ns high Councel-Table,
To sit the midst of Trinal Unity,
He laid aside; and here with us to be,
Forsook the Courts of everlasting Day,
And chose with us a darksom House of mortal Clay.

Say Heav’nly Muse, shall not thy sacred vein
Afford a present to the Infant God?
Hast thou no vers, no hymn, or solemn strein,
To welcom him to this his new abode,
Now while the Heav’n by the Suns team untrod,
Hath took no print of the approching light,
And all the spangled host keep watch in squadrons bright?

See how from far upon the Eastern rode
The Star-led Wisards haste with odours sweet:
O run, prevent them with thy humble ode,
And lay it lowly at his blessed feet;
Have thou the honour first, thy Lord to greet,
And joyn thy voice unto the Angel Quire,
From out his secret Altar toucht with hallow’d fire.