Somewhat belatedly (by international standards) we introduced the Official Cash Rate (OCR)  in March 1999.  The OCR wasn’t a rate that directly affected anyone outside the banking sector  – at the time it was introduced it wasn’t even a rate directly received or paid by anyone, simply the midpoint between the rate we paid banks on their deposits, and the rate we were willing to lend to banks on demand at.  But the OCR quickly established the expected quite tight relationship with rates that did affect firms and households in the real economy.  It was never a precise relationship –  one was for overnight money, one was for a 90 day term; one was for unsecured interbank lending and the other for almost risk-free transactions –  but it was close.

Seventeen years on, it probably does make sense to switch over to using the OCR.  This post isn’t to disagree with the Bank’s change –  which, in the scheme of things, is a pretty minor matter.

But I was a bit puzzled by some of the reasoning the Bank advanced for making the change.   They mentioned two considerations.  The second one they list is fine

The publication of OCR projections as opposed to 90-day bank bill rate projections also brings the Bank into line with the practice of other central banks that publish expected policy paths.

Not many other central banks do publish short-term interest rate projections, but those that do use the policy rate itself, rather than some market rate closely linked to the policy rate.

But their main argument is that the relationship between the OCR and the 90 day bill rate (and perhaps, by implication, other rates that affect real economic activity and inflation) had changed or even broken down.

Historically the 90-day bank bill rate has provided a good gauge for the stance of monetary policy because it typically moves in a consistent manner with the OCR. Variations in the past have generally been temporary and experienced during periods of financial stress. More recently, regulatory changes in global financial markets have also been altering the relationship between the 90-day bank bill and OCR, complicating the Bank’s communication of the monetary policy outlook.

I knew things had gone a little haywire during the financial crisis –  relative to risk-free assets, yields on anything involving bank risk had gone much higher than usual.  But that was some years ago and –  frankly –  in the middle of a global crisis of that severity, projections are even less use than usual anyway.  But what about over the longer sweep of history, pre-crisis and more recently?  Here is a chart of the OCR and the 90 day bill rate. 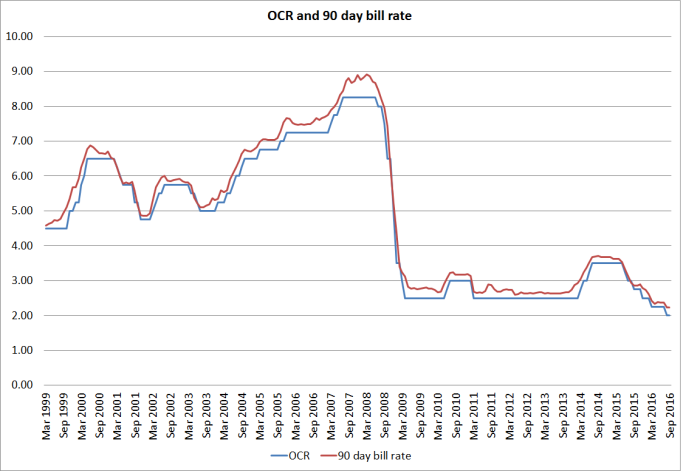 And here is the gap between them.

Not much looks to have changed.  If anything the gap is a bit less volatile since the 08/09 crisis, but that is probably mostly because the OCR itself has been less variable. That might change again at some point.

And it is worth noting that the relationship hasn’t changed materially even though what the OCR itself is has changed over the years.  It started out as the mid-rate between the Reserve Bank’s deposit and lending rates, but for the last decade or so it has been the deposit rate the Bank pays on (the bulk of) bank settlement account balances at the Reserve Bank.

Economic activity and inflation pressures aren’t directly affected by the OCR.  What matters more to firms and households are the rates they themselves receive and pay.  The Reserve Bank doesn’t publish very good data on those rates, but they do publish a number of long-running indicator series.

And there have been some significant changes in the relationships between wholesale interest rates and some of these key retail rates in the years since the financial stresses of 2008/09.    Here is the gap between the 90 day bank bill rate and (a) variable first mortgage rates, and (b) six month term deposit rates.

Retail term deposits matter much more to banks now than they did, for some combination of regulatory and market reasons (and the cost of longer-term foreign wholesale funding –  not shown – influences just how eager banks are to pay up for term deposits).  As a result, both term deposit rates and floating mortgage rates are much higher, relative to 90 day bill rates, than they were in the pre-crisis years.  That is a major change that the Reserve Bank had to take into account (and consistently has).

But here is the same chart, except that this time I’ve used the gap between the OCR and the retail rates.

As you’d expect –  because the OCR and 90 day bill rates track so closely –  they tell almost exactly the same story.

I don’t doubt that, as they say

The Bank views publishing a projection for the OCR as a more transparent way of presenting the expected policy actions needed to achieve its inflation target.

But the gains will be small at best.  They will still be publishing smoothed quarterly projections, rather than specific projections for each OCR review –  the latter, which I’m not advocating, would take the transparency about policy rate expectations to the extreme.  And the Governor is still likely to be torn between times when he really wants to give a clear strong signal, and times when he is uncertain enough about the future, even a few months ahead, not to want to do so.

There is a reasonable case for the change the Bank is making, but –  contrary to what they suggest -the justification isn’t in any change in the relationship between 90 day bill rates and the OCR itself.  There hasn’t been one.   And if there have been problems with the Bank’s communications over the last few years –  and there have –  those problems have had very little, arguably nothing, to do with the precise short-term interest rate variable the Reserve Bank chooses to publish projections for.

In many respect, the bigger questions –  which everyone would grant are more important –  are whether

(a) the Reserve Bank should publish policy rate projections at all, and

(b) more radically, it (and other central banks) should publish economic projections at all.

I could devote entire, lengthy, posts to each, but won’t do so today.  My own view is that central banks shouldn’t publish policy rate projections –  most don’t –  and that if they publish economic projections at all, there is no value in projections for much more than a few quarters ahead.  The reason is really quite simple: central banks know almost nothing about the future (and neither, with any degree of confidence, does anyone else).

Here (purely illustratively) is the chart of 90 day bill rates, and Reserve Bank forecasts from each of the last three December MPSs.

These haven’t been uniquely difficult years. There was no domestic recession –  forecasters never pick recessions – the unemployment rate didn’t change very much, and if there were ups and downs in some of our export sectors it isn’t obvious that taken together things were much harder to read than usual.   And yet the Reserve Bank really had no idea where the OCR/90 day bill rate would be.  At times I’ve been quite critical of their specific misjudgements, but poor as some of those were, over long periods of time our Reserve Bank is probably no better or worse at medium-term forecasting than any of their peers.  It typically isn’t, and probably can’t, be done well.

A common defence is “oh, but we know the projections won’t be accurate, but at least we can give a sense of how we might react if (when) things turn out differently”.    But even that isn’t very persuasive. If they really think they can give us useful stable information about how they will react to changing circumstances, it should be enough to publish the model (s) they are using and the reaction function embedded in them.  As it is, I’m skeptical there is very much information in either those model reaction functions or in the published policy rate projections.  They might tell you how the Governor thinks now we would react in, say, 18 months time, but in truth he won’t know until he gets there –  partly because there will be a lot of contextual material not captured in today’s forecasts.  In the current New Zealand context, the medium-term forecasts are particularly useless –  the current PTA expires in only 11 months and, most probably, the current Governor will have retired and been replaced by then.  Different Governors will read the same data, and even the same PTA, differently.

Does it matter?  After all, if the policy rate projections –  beyond perhaps the next quarter –  have almost no useful (forecasting) information, perhaps they just do no harm?   I think they do do some harm, simply because resources are scarce and policymakers and their analytical staff have to choose where to focus their efforts. In my experience at the Bank, considerable time was devoted to trying to divine the future –  and haggle about the policy track that we would present.  Time spent on that, largely fruitless, task is time that couldn’t be spent making sense of what we already know, but don’t adequately understand: what has already happened (eg to core inflation) and why.  Central bankers –  and others –  whether here or abroad don’t have adequate answers to that, and without such answers attempts at projecting future policy rates etc are even more futile than usual.

When the Reserve Bank Board begins to turn their attention to choosing the next Governor, I’m sure they won’t be looking for a “soothsayer in chief” –  and they would be foolish to do so.  They will, I would expect, be looking for someone with the temperament and judgement to react wisely to events as they actually unfold, and to lead an organization as it does likewise.  It is hard to enough to do that, and even often to make sense of actual incoming (prone to revision) data, without maintaining the pretence that central banks –  or anyone else –  can read the future, and usefully tell us now where they think interest rates might be 12 or 18 months hence.