Skip to content
HomeInflation is – still – expected to rise

Inflation is expected to rise gradually towards the two percent midpoint of the target range.

That was what the then Reserve Bank Governor said in the press release for the March quarter Monetary Policy Statement five years ago.

Overall, CPI inflation is forecast to trend upwards towards the midpoint of the target range

So much time has passed, and so little has changed.  I could probably compile a complete set of those sorts of quotes, drawing from every OCR review for at least the last five years.

And this is how the Reserve Bank’s preferred core inflation measure has actually been performing. 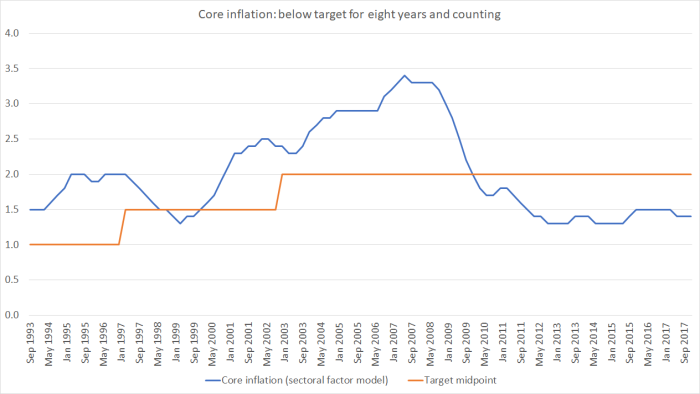 December 2009 was the last time core inflation was at 2 per cent.  And there is little or no sign that –  despite all the Reserve Bank forecasts –  that the gap has been closing.

The Reserve Bank doesn’t publish core inflation forecasts, but since they also don’t typically forecast price shocks (the sorts of one-offs that get sifted out in the core measures), their actual medium-term inflation forecasts are a reasonable proxy.   On the numbers published this morning, it will be September 2020 before we could expect to see core inflation back to 2 per cent –   if so, core inflation would have been below the (explicitly highlighted) target midpoint for more than a decade.  Even though over that whole period our Reserve Bank has not once come close to exhausting the limits of conventional monetary policy.

And the worst of it is that neither in the published statement this morning, nor in the press conference could the Bank’s second XI (holding the fort until the new Governor takes office next month) offer any explanation for why they are more likely to be right this time than in those previous five years of statements affirming that inflation was heading back to the target midpoint.   In fact, there was no sign of them even attempting such an explanation.

Over the years core inflation has been below target we’ve had the big boost to demand from the Christchurch repair process, a material further step up in the terms of trade (albeit with a fair amount of volaility), a significant reduction in unemployment, and the demand effects of an unexpectedly strong and persistent rate of population growth.  We’ve seen the end of the fiscal consolidation phase too.  And there has been no sign of core inflation picking up much, if at all.    What, we should expect to be told, is likely to make things different over the next few years?   And why have they got things wrong – again – over the last couple of years?

The Bank claims the output gap is now near-zero, but on their own (inevitably imprecise) estimates those resource pressures are a bit less than they were, and haven’t changed much for several years now.

In the press conference, there were several questions about the case for an OCR cut, which the Bank sought to bat away (not remotely convincingly in my view).  The “acting Governor” acknowledged that there is a risk that the next OCR adjustment could be a cut –  if the downside inflation surprises continue –  but repeatedly sought to play down the significance of the 2 per cent target midpoint, which –  as a focal point – was explicitly added to the Policy Targets Agreeement in 2012.  Asked –  channelling lines run in this blog –  whether it might not be time to take some risks, after eight years of (core) inflation below target, Spencer could only fall back on observing that inflation had been inside the range, and that what mattered was to be patient and confident that inflation would be back to the target midpoint before long.  In other words, trust us, even though that trust has been misplaced for years now.

Asked then whether there was not also a case for acting now to push up inflation to create more policy leeway (in nominal interest rates) when the next recession comes, Spencer could offer nothing more than the limp observation that “we have to have a good reason to change policy”, and that they wouldn’t want to change rates until they could be confident the policy could be sustained (even though the whole point of this particular proposal is to use lower policy rates in the short-term to generate higher policy rates in the medium-term).

I suspect that much of what is going on is the same old line was used to hear repeatedly from Graeme Wheeler – the “normalisation” of interest rates which are currently –  in the Deputy Governor’s words –  “very stimulatory”.   A common way of judging whether policy is “very stimulatory” or not might be to look at inflation developments, which suggest –  for now at least –  that the neutral interest rate has fallen.   The siren call of “policy normalisation” has tantalised central banks for much of the last decade –  none more so than the Reserve Bank of New Zealand, with two unwarranted and reversed sets of OCR increases –  and isn’t helping the cause of good policy.  Perhaps –  perhaps even probably –  at some point interest rates will move up quite a lot and stay higher, but that hasn’t a helpful guide to practical policy at any time in the last decade.   Actual (core) inflation, by contrast, has been.   The Reserve Bank now seems tantalised by the official rate increases in the US and Canada, but there is little sign of that becoming a generalised pattern across advanced country central banks –  partly because there is little sign of generalised increases in core inflation.

There was one new interesting development in the Monetary Policy Statement.  Buried in a footnote was the report of a new point estimate for the NAIRU of 4.7 per cent (in the press conference, they added a range of 4.0 to 5.5 per cent), based on some as yet unpublished research work.  I welcome the publication of the estimate –  a step forward –  but I’m a bit sceptical about their number (which is actually higher than the NAIRU estimate the Bank had in its models a decade ago, and there are good reasons to think NAIRUs –  here and abroad –  have been falling over time).  But if they really believe the story that the output gap is zero and the unemployment gap is zero, and their own data show (see chart here) that there is nothing unusual about the current relationship between core tradables and core non-tradables inflation, then it raises some questions they don’t seem to have attempted to answer.  Given that actual core inflation has been persistently low, it would suggest that inflation expectations are also well below the target midpoint.  As I’ve illustrated again recently, that is certainly the case in bond market indicators (unlike say the case in the US), but the Bank continues to assert that there is no issue and that inflation expectations are securely anchored at 2 per cent.  Something in their story doesn’t seem to add up.

In a way, today’s Monetary Policy Statement doesn’t matter much:

In other words, what Grant Spencer thinks today about future policy isn’t that important and obviously isn’t binding.  But there is no reason why the analytical part of the document could not have been a lot more persuasive –  if in fact the existing senior management team has a compelling story to tell.  As it is, they don’t seem to.

At the end of the press conference, Bernard Hickey invited Grant Spencer to reflect on his involvement with many Monetary Policy Statements over the years (going back to the very first one in April 1990 –  which I drafted most of, and Grant was my boss).    He offered only two brief thoughts: flexible inflation targeting had proved to be a good framework, and the (slightly cryptic) patience is a virtue.   I wasn’t sure if that latter observation was as close as we were going to get –  from a thoroughly decent senior public servant –  to an acknowledgement that the 2014 tightening cycle, driven by a combination of conviction that inflation was about to take off (above 2 per cent) and repeated talk of “policy normalisation”  –  had been a mistake.

If so, we should be grateful, but it is still important that the Bank shouldn’t be so paralysed by its previous mistake –  an inevitable human tendency –  that it fails to do its job.  It is increasingly difficult to see why we should confidently expect core inflation to get back to 2 per cent on current policy, or what harm might be done from signalling more strongly the possibility of a lower OCR.  After all, as both the “acting Governor” and the chief economist said, the aim isn’t to be exactly at 2 per cent each and every quarter, and if anything a period of inflation a bit above 2 per cent –  not sought, but if it happened –  might actually help to rebuild confidence that the target really was centred on 2 per cent, not operating as a ceiling of 2 per cent.

11 thoughts on “Inflation is – still – expected to rise”