This afternoon Shamubeel Eaqub of NZIER presented in the Treasury Guest Lecture Series.  Building from material in his short book Growing Apart and drawing on census data the highlighted the economic divergences between Auckland (and Wellington) on the one hand, and many of the other regional council areas in New Zealand.  Population has increasingly gravitated towards big cities, and many towns and some provinces are already facing the prospect of absolute population decline.

The regional mix of the population has been changing, at least ever since European settlement.  Towns have either disappeared completely, or shrunk  –  absolutely and relatively –  from their former glory. I visited Hokitika again last year, and was reminded that it was  once (briefly) one of the larger towns in New Zealand.  Shamubeel seemed to regard the shifting population mix as something for central and local government policymakers to respond to with positive programmes of action.  That seems much less clear to me.  A good maxim for policy is “first do no harm”.  Local governments in particular seem prone to doing harm.  As Shamubeel reminded us, the Dunedin white elephant stadium was an initiative of a local body, hoping a covered stadium would help boost Dunedin, with no robust cost-benefit analysis.  The individual citizens of Dunedin certainly would not have taken on such ill-considered risk themselves.  Wellington City Council seems to hanker to waste similar amounts of money on an airport runway extension.  And it is local authorities who are responsible for making land for housing scarce in growing regions.

Perhaps we need to focus policymaker attention on getting government out of the way, and allowing market adjustments to work.  For example, to help make growing towns and cities more affordable and responsive mandate that property owners everywhere have a presumptive right to build houses/apartments up to three storeys high (I’m looking out on one that high as I type).  And on the other hand, look to wind back onerous central government infrastructure mandates, especially for declining areas.  Citizens of those area are likely to choose themselves to settle for less than the best.  And reversing the proposed new earthquake building standards, which have destroyed value across the country (and especially in older regions) for little or no expected savings of human life.   Perhaps more controversially – and a subject to which I will return – cut back the large scale programme of inward migration.  This is a central government programme, whose direct effects are concentrated in Auckland, puts pressure on non-tradables prices across the country, and undermines the competitiveness of tradables sector producers concentrated in places like (eg) Hawkes Bay, Waikato, Otago, or Nelson.

For all the elite discussion around the importance of Auckland to New Zealand’s economic prospects, today’s regional GDP data was more than a little puzzling.  According to SNZ, nominal GDP per capita in Auckland has been trending downwards relative to that in New Zealand as a whole for the last 14 years.  No doubt the recent high terms of trade are part of the story, but I don’t know quite what to make of these data. 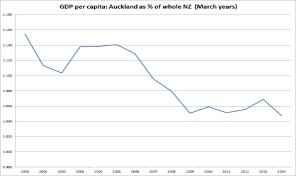