Skip to content
HomeSocial Credit – too timid by far this time

Social Credit ideas have a long history in New Zealand.  The originator, Major Douglas, even visited New Zealand in 1934 and testified to a parliamentary committee.  The ideas influenced Labour in particular in the 1930s, and some who later played very prominent roles in National.  We got our very own political party – the Social Credit Political League – in 1954 and from time to time Social Credit did very well in the polls (and under FPP even managed four MPs at the different times from the 1960s to the 1980s).  I recall a time –  perhaps 1980 –  when Social Credit briefly polled ahead of Labour.  There had been an entire Royal Commission in the 1950s, mostly intended to debunk them, but  they weren’t deterred –  as a young economist at the Reserve Bank, a fair amount of my time was spent responding to letters, to us or the Minister, from Social Credit monetary reformers.  Some of were admirably dogged, and typically very polite, although one particular frequent letter writer once lamented that his letters were getting nowhere with us and felt as if he might just as well jump off a cliff.  Our then chief economist suggested that perhaps writing a book might help, and a year or two later we got the book in the mail.

It is a fascinating history but today I’m not going to wallow further in it.  The key policy plank always used to be cheap Reserve Bank credit as the macroeconomic answer.

It still appears to be so.   Social Credit still exists in New Zealand.   Democrats for Social Credit got 806 party votes at the last election.  And on Saturday I opened both papers – Dominion-Post and Herald – to find full page adverts from the NZ Social Credit Association.

Several economists and various other commentators have extracts of their work presented as supporting the Social Credit vision/platform (to be fair, the advert makes clear that none of the people concerned have any association with Social Credit or with the advert).  It isn’t hard to find such quotes –  as my wife notes, I should probably count myself lucky that none from me appeared (after all, that quote from Shamubeel Eaqub is very much in line with my post the other day noting that there was no real macro difference between the Reserve Bank, at its discretion, choosing to buy bonds on the secondary market and choosing to buy them direct from the government).

Anyway, Social, Credit is trying to gather signatures for a petition (although not, it appears, a real parliamentary one) as follows:

We are calling on the New Zealand government to use the Reserve Bank (which the government owns) to fund the Covid-19 economic rescue package.

It is, they claim

And here is underlying graphic 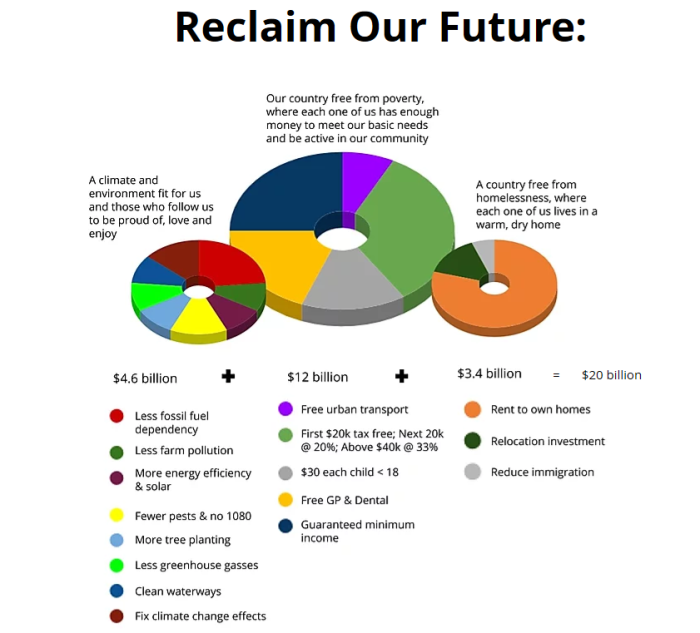 The thing that seems to unite most monetary reformers is that they believe monetary policy and things around “the money supply” are much more powerful, much more important, than most monetary economists and central bankers do.

Before addressing what the Social Creditors are proposing, I should say that I am not one of those who thinks governments can do little or nothing useful in severe economic downturns  (there are a few such people, at least in principle, although few are visible/audible right now).  I’ve been championing here a more aggressive use of fiscal policy in the short-term (the 80 per cent net income guarantee for 2020/21), and for a much more aggressive use of conventional monetary policy.  Macro policy can help get the economy back to work as promptly as possible, but borrowing from the Reserve Bank –  whether at 1 per cent as Social Credit used to call for, or 0 per cent as they may now belief –  is largely irrelevant to the solution.

Note –  and here perhaps I depart from some of my friends on the right –  I did not say reckless and highly inflationary (as, for example, Social Credit prescriptions in the 1950s would have been).     There is far too much jumping at inflationary shadows still –  as there was 10 years ago in some circles (in the US in particular), and (so I was reminded rereading Eichengreen over the weekend) in the depths of the Great Depression –  at a time when the predominant macro risk (reflected in market prices themselves) is deflation.  Just largely irrelevant for now.

Which is just what Social Credit thought they were avoiding.    They weren’t.  And the other relevant detail here is that the Reserve Bank pays interest on those deposits banks hold with them: at present 0.25 per cent per annum on the entire stock.

Banks, of course, have their own liabilities on the other side of their balance sheets, on which they too pay interest.    Some of them might be “wealthy foreigners”.  Others will be Grandma.

And what determines (or is supposed to determine) the rate the Reserve Bank pays on the deposits banks hold with it –  the OCR?  Why, that would be the inflation outlook, since they are required to aim to keep inflation at or near the target the Minister of Finance sets for them.

Perhaps advocates of Social Credit will be saying “ah, but 0.25 per cent is still cheaper than the interest rates the government might pay if it issued the bonds directly on market” (at present, long-term bond yields are a bit below 1 per cent, but would be higher than that if the Reserve Bank were not in the secondary market).   And that is true, but a 10 or 15 year bond yield is capturing, among other things, implicit expectations as to what monetary policy will be doing –  where the OCR will be set –  for the next 10 or 15 years.  Perhaps rightly, perhaps wrongly, at present the consensus view is that on average over that period the OCR will be higher than it is now, once the economy gets back to something more like full employment.

If that is right then, all else equal, even if the government has locked in zero interest funding itself from the Reserve Bank at zero per cent interest, the Reserve Bank would find itself having to pay higher interest rates over time to holders of settlement cash balances (or it might auction off some of its bonds to reduce settlement cash balances, but the macro effect would be much the same).    Reserve Bank interest expenses are a net cost to the Crown just as surely as if the Crown issued the debt directly on market.

And if the Reserve Bank did not make those adjustments –  higher OCR if and when inflation pressures eventually recovered – the result would be higher inflation.  And high inflation would be just as surely a “tax” –  transferring real resources from the public to the Crown –  as the taxes Social Credit claims they offer a path to avoid.

Perhaps the bigger problem still is that the Social Credit proposals are probably inadequate to the needs of the hour.

As I’ve noted in various posts in the last week or so, the Reserve Bank has added a huge amount to banks’ settlement account balances in total (balances last week were more than $20 billion higher than usual).  The “money supply” –  particular aggregate measures the Bank publishes – will also have increased to some extent (we’ll be waiting for weeks to see the end-April numbers).   But the higher settlement cash balances simply don’t mean very much.  For banks, it is just another asset –  a rock-solid one (which must be welcome) paying a reasonable interest rate for now, 0.25 per cent.    It isn’t as if there is much real effective credit demand at present, and the nervousness of many households and firms is probably reflected in quite a strong desire to save.

And whichever mechanism the Reserve Bank uses to buy bonds isn’t itself affecting how much the government is spending.  You might think (I suspect Social Credit do) that the government should be spending more.  That’s fine, but it won’t have any problem raising those funds –  whether it does so by issuing bonds on market, or issuing them to the Reserve Bank.  And it isn’t as if a shortage of settlement cash is constraining bank lending at present –  instead it is primarily weak demand from demonstrably creditworthy borrowers and perhaps an absence of attractive projects to fund (two sides of the much the same coin).

If the Social Creditors wanted a monetary policy that made a real difference in the current climate they’d give up their small ambitions and focus instead on where the big gains might really be on offer.

Perhaps a 1 per cent interest rate sounded really low to Major Douglas back in the 1920s, or to Social Creditors in most of the decades since.     These days it would be a very high interest rate, quite out of line with the needs of the economy.   Same goes for that 0.25 per cent the Reserve Bank is paying on the tens of billions of settlement cash balances.   Same really goes for zero, when so much of the government debt of major advanced economies has been earning a negative yield for some time.  Not surprisingly then, on the one hand our exchange rate is staying quite strong –  really unusual for a serious New Zealand recession –  and expectations about future inflation are falling (in turn raising the real interest rate –  a simply insane outcome in the midst of a deep recession with a highly creditworthy sovereign borrower).  But it isn’t wealthy investors or evil foreign banks who are determining that our interest rates are still so high: instead, it is Adrian Orr (and his Monetary Policy Committee, several of whom share the Governor’s left-wing credentials) and Grant Robertson, he who is always talking about the significance of full employment, but yet who does nothing to bring about the much lower (short-term) interest rates the current situation calls for.   Even in the last US recession, highly orthodox researchers within the Federal Reserve system concluded that a Fed funds rate of more like -5 per cent would have been helpful.  Our starting point this time, is worse than the US’s in 2008 (the Fed funds rate then started at 5.25 per cent).

In this environment, Social Credit is a distraction, but then so is the Governor’s bond-buying programme itself.    As in the Great Depression it was breaking free of the “golden fetters” that eventually allowed robust recovery, so this time it is the self-imposed “paper chains” – the refusal to do anything about seriously negative interest rates, that will impede prospects for any sort of robust recovery (and, not incidentially, worsen the worthy outcomes in the Social Credit graphic above).  Bond-buying programmes at yields well above the current natural rate of interest are just flashy-sounding asset swaps with little macro significance.

(And in case people are worrying about threats to central bank independence, recall that (a) the Bank’s current bond-buying programme, and any purchases it might in future make directly from the Crown, are a discretionary choice for Bank, and subject to the inflation target, and (b) central bank independence is not an absolute, or even always helpful –  the Fed, for example, was independent in the early 1930s and consistently resistant to doing very much of what needed to be done to get the US economy going (statutory powers for the Minister to (a) set the Bank’s target, and (b) override the Bank in some circumstances, but openly, exist for a reason).

Back in the mid-1950s Professor Sir Alan Danks wrote on Social Credit and its problems. https://t.co/zucoZWJAuU

13 thoughts on “Social Credit – too timid by far this time”