Every so often I get round to updating my charts of some indicators of the relative performance of the tradables and non-tradables sectors of our economy.  With new GDP numbers out yesterday, now seems as good a day as any.

This is my headline chart. 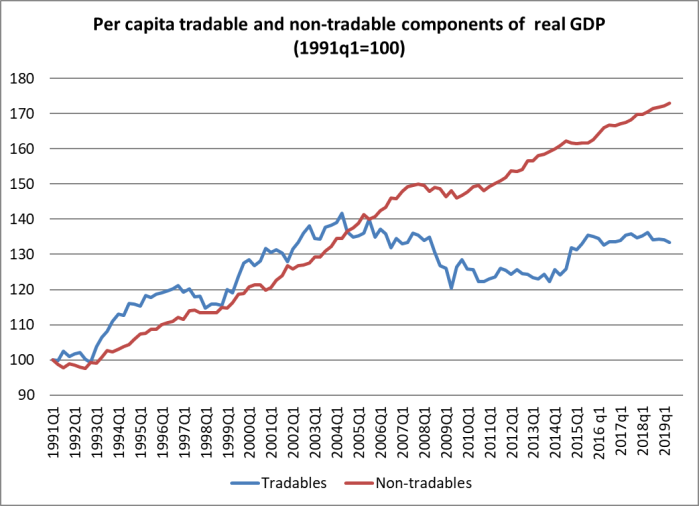 Here tradables is a rough and ready aggregation of primary sector and manufacturing GDP (from the production GDP numbers) and exports of services (from the expenditure GDP series).  Non-tradables is the rest (of GDP).   The idea is to split out those sectors which face international competition from those that don’t.     It is no more than an indicator, and people often like to point out the components of “non-tradables” where, at least in principle, there is international competition.   But as a rough and ready indicator, it serves its purpose.   It was first developed by a visiting IMF mission about 15 years ago to help illustrate how one might think about the impact of a lift in the real exchange rate.

You will recall my line (oft repeated) that really successful economies tend to be ones with really robust tradables (and exports –  although the two aren’t the same thing) sectors.  Not because tradables are special, but because success in the (much bigger) wider world market, or against the wider world of competing producers, is an indicator about something going right in your economy.

Whereas in New Zealand, the economy appears to have become increasingly skewed towards non-tradables.  In per capita terms, there has been no growth in this indicator of tradables sector GDP since 2002 whereas the non-tradables sector has grown by 40 per cent.   There have been a few ups and downs in that tradables line of course.  There was some brief encouragement in that lift a few years ago, but the new level is nothing to write home about.  If anything, the tradables line looks to be tailing off again, at least a bit.

There are people out there who really really don’t like this indicator.  So for them, and to shed a bit more light on what has gone on, here are the individual components of the tradables line. 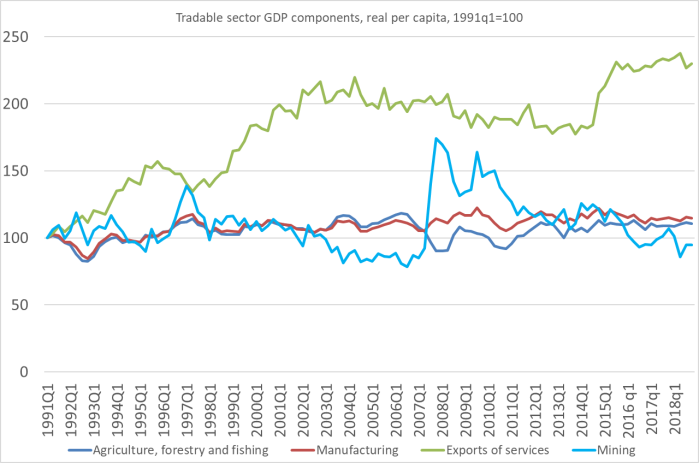 Actual real GDP for all three sector has risen quite a bit, but there are almost 1.2 million more people than there were in 1997.

What of services exports?  They have grown a lot, even in per capita terms. But the growth was a generation ago now: real per capita services exports more than doubled between 1991 and 2002.  Since 2002, there has only been about 6 per cent growth, in total. Over 17 years.

And some context on services exports from last week’s post. 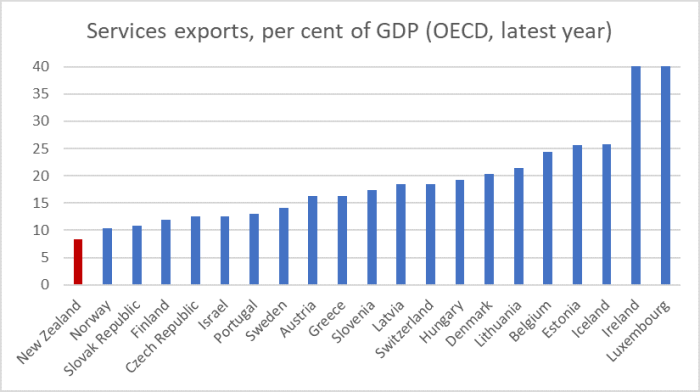 New Zealand has the smallest share of services exports in GDP of all these smallish OECD countries –  and by quite a margin.       And it isn’t as if we are closing the gap.   Over the last 20 years, services exports as a share of GDP have barely changed in New Zealand (with some ups and downs) while for the median of the other smallish OECD countries, the increase was 6.7 percentage points of GDP.

It is hard to (rapidly grow) exports from New Zealand.  Distance is a big obstacle (at least for anything other than natural resources), and so are regulatory limits (some probably warranted, others probably not) on the utilisation of the fixed stock of natural resources.

But it always pays to keep an eye on the (real) exchange rate.  One way of looking at the real exchange rate is the price of non-tradables relative to the price of tradables.  That has been rising substantially in New Zealand.  The other is simply to use one of long-term international indices, deflating a nominal exchange rate index by some measure of costs and prices.   This is a chart I’ve used every few months 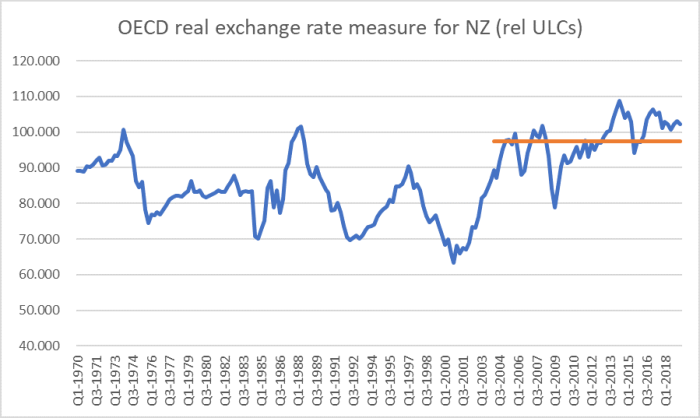 Sure, the exchange rate has been falling a bit in the last few months (the chart is quarterly and thus only  up to June) but it is nothing out of the ordinary relative to the average level for the last fifteen years  –  which was far higher than the average for the previous few decades (since, say, the mid-70s).

There is nothing wrong with a high real exchange rate –  in fact, it is a natural outgrowth –  if your economy is doing well and generating consistently strong productivity growth relative to the rest of the world.   But, of course, that isn’t the situation in New Zealand.   The government doesn’t directly set the real exchange rate –  and the Reserve Bank has very little influence on it beyond the short-run –  but government policy choices have helped skew the economy in ways that mean the tradables sector has been squeezed, such that we’ve had almost no growth in real per capita tradables sector GDP this century.

And no political party in Parliament seems to have any real idea about how to change that, or any real desire to address seriously the issue.

6 thoughts on “Tradables and non-tradables”