Last week I wrote briefly about a short presentation, at a Victoria University event, by tax blogger (and former Treasury/IRD official, former adviser to the Tax Working Group) Andrea Black on what should be done with the company tax rate.  Andrea argued that it should be raised, both to collect more tax from the “rich” and to reduce the evident opportunities for avoiding or deferring tax that differential rates for company, personal, and trust income creates.

Since what I wrote about that was buried in the middle of a long post, I reproduce the relevant section here

I wasn’t really persuaded.  With dividend imputation, the company tax rate in New Zealand bears much more heavily on foreign investors (none of whom needs to be here) than it does on domestic shareholders.  In a country with low rates of business investment and now relatively low rates of foreign investment, it seems cavalier to be calling for increases in company tax rates which the global trend is clearly downwards (at 33 per cent the company tax rate would be the second highest in the OECD).   In defence of her position, Andrea invoked some old IRD analysis that company tax cuts haven’t made much difference to investment –    IRD has a strong institutional bias towards a simple tax system and little real focus on productivity, economic performance or anything of the sort – while noting that “if you did care about foreign investors” –  there were various technical tweaks (I didn’t catch them, but perhaps thin capital rules?) that could be adjusted to compensate them at least in part.

As if to forestall a question, Andrea alluded to this chart I’ve used several times –  a version of which appeared in the TWG’s own background document last year.

Prima facie, it didn’t look as though – by international standards – we were undertaxing business income.

Now, of course, there are some well-recognised caveats to this data.  First, it doesn’t take account of dividend imputation in New Zealand (and Australia, but not elsewhere), and the TWG suggested there were some issues around consistency of treatment of government-owned businesses.  On the other hand, in many countries lots of shares are owned by long-term savings vehicles with much less onerous tax provisions than their peers in New Zealand would have, and our tax system (mercifully) has fewer deductions and “holes” in it.     In yesterday’s presentation Andrea suggested that in many other countries various classes of business income that would be incorporated –  and thus captured in the chart – here wouldn’t be treated the same way in other countries.

All that said, if anyone is seriously suggesting that the chart of OECD data is substantially misleading about the New Zealand position –  say that in truth we might be in the lower half of the chart on an apples-for-apples comparison, the onus is probably on them to demonstrate that more specifically.    The OECD data itself suggests we have taxed businesses quite heavily going back 50 years, to (for example) well before imputation was ever on the scene (chart in this post).  Perhaps it is just coincidence – and I’m certainly not suggesting it is the only factor –  that business investment as a share of GDP has been low by OECD standards throughout almost all that period.

In a comment on my post, Andrea clarified that it was changes to the thin-capitalisation rules she had in mind to mitigate adverse effects on foreign investors.

I’m sympathetic to the idea that New Zealand shareholders shouldn’t be able to shelter income in companies in a way that means that some forms of flow capital income are taxed more lightly than others.  For small closely-held companies, for example, I can see a certain logic to a mandatory distribution of profits (which could then be simultaneously reinvested).

When I heard Andrea’s brief presentation last week, I hadn’t seen her initial post on the issue.   It is worth reading and she presents what looks like persuasive indications that there is more of an issue here than (for example) some people who commented on my post or got in touch privately might have suggested.   For example

Except that overdrawn current account balances – loans from the company to the shareholders- have been similarly growing too. Now sitting at about $25 billion.

And yes this all started from about 2010. And what happened in 2010? Why dear readers the company tax rate was cut to 28% while the trust rate remained at 33%.

Last night Andrea put out a further post on the issue, prompted (it appeared) by my post last week.    It is also worth reading, repeating some of the earlier material but also extending her argument.   For example, in dealing with the foreign investment issues she now suggests another possible response

If the focus was New Zealanders owning closely held New Zealand businesses, an adjustment could be made either by increasing the thin capitalisation debt percentage or making a portion – most likely 5/33 – of the imputation credit refundable on distribution.

I’ll leave you to read Andrea’s case. On its own terms, it makes a fair amount of sense on her terms (and she is much more expert on tax detail than I am) but I want to focus on the issue through a different lens.

Thus, take for example the line –  which apparently originates with IRD –  that we’ve had no more foreign investment since the company tax rate was cut.   Well, here is a chart of New Zealand company tax rate relative to the median OECD country’s company tax rate (OECD data that take account of sub-national taxes as well).

The story of the century, around company tax, is that the gap has been widening between our company tax and those in other advanced countries (with the two local cuts just temporarily closing the gap a bit). At the start of the century, our company tax rate was around the median for the OECD countries, and in 2019 it is just over 4 percentage points higher.  (One could add that the global environment for business investment seems to have been pretty poor over the last decade, not least in New Zealand.)

At present, our company tax rate –  the one that counts for foreign investors –  is just above the upper quartile.

Andrea’s proposal would give us the highest company tax rate in the OECD.   One could adopt the clever wheezes she suggests to limit any adverse effect on foreign investors of raising the rate but (a) our statutory rate is already (now) at the upper end of the scale, and (b) our company tax regime is generally regarded as fewer holes and deduction possibilities etc than many of those in other countries.

And it isn’t as if business investment has been present in abundance in New Zealand.   This chart is from an OECD review of New Zealand from a few years ago. 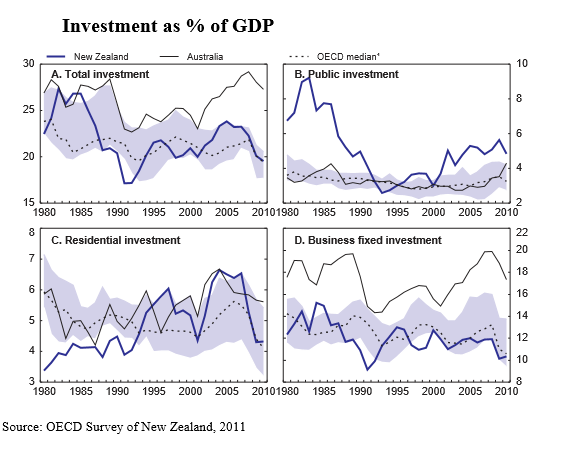 Focus on that bottom right panel.  The only time business investment as a share of GDP was above that for the median OECD country for a few years was during Think Big – the spectacular government-led misallocation of capital.  And recall that for at least the last 25 years, our population growth has been well above that of the median OECD country, so that all else equal one might have expected more of current GDP to be devoted to investment.

I’ve seen –  but can’t now find –  the OECD data for these graphs back to the 1960s and the picture is similar,  What about the more recent period?

I am not, repeat not, suggesting that our company tax rate –  or the broader tax regime for capital income –  is the only factor, or even necesssarily the most important factor, in our weak business investment (and terrible productivity growth) record.   Simply that if any government were ever seriously concerned about those failures –  and wouldn’t that be a novelty –  raising the company tax rate looks as though it would be a step in the wrong direction.     If anything, in my view we should be taxing capital income less heavily.  No business has to invest – and no foreign investor has to invest here –  and if you want more of something it isn’t usually a good place to start to tax it more heavily.

And to end on a note that seems to me to –  at least on paper – better balance fairness and efficiency/opportunity, here is my final paragraph about that seminar last week at which Andrea spoke.

I remain tantalised by the idea of a progressive consumption tax. In the abstract, it gets around all the debates on capital gains taxes, realisations (or not), company taxes, gift or inheritance taxes or whatever, and has the appealing the feature of taxing people on what they consume not on what they produce.  Of course, no country runs such a system –  which does have formidable practical issues.   And if one wants to align company and personal rates – which has some appeal (although the Nordic model questions that), better to lower the personal income tax rates by 5 percentage points (max rate to 28 per cent) and add a Social Security Tax of 5 percentage points on labour income up to a certain threshold.  New Zealand and Australia are, as I understand it, the only OECD countries not to adopt some such model (we do it on a very small scale with ACC).