I’ve been intrigued by the CANZUK proposition for some time.  In their own words,

CANZUK International was founded in January 2015 …and is the world’s leading non-profit organisation advocating freedom of movement, free trade and foreign policy coordination between Canada, Australia, New Zealand and the United Kingdom (the “CANZUK” countries).

Our campaign advocates closer cooperation between these four nations so they may build upon existing economic, diplomatic and institutional ties to forge a cohesive alliance of nation-states with a truly global outlook.

There is an online petition, and when I checked a few minutes ago 273,872 people had signed it.  Not insignificant numbers, although the total population of the four countries is over 125 million people.

On top of which, I discovered recently that one of the more vocal champions of CANZUK is a pro-Brexit British economist (New Zealand born apparently) who is related to my wife.  He takes every opportunity to champion the cause, as this tweet from earlier this morning.

There has been some public opinion polling on the CANZUK idea, and the movement really rather liked the results.    This was the question (for New Zealand)

And this chart summarised the answers. 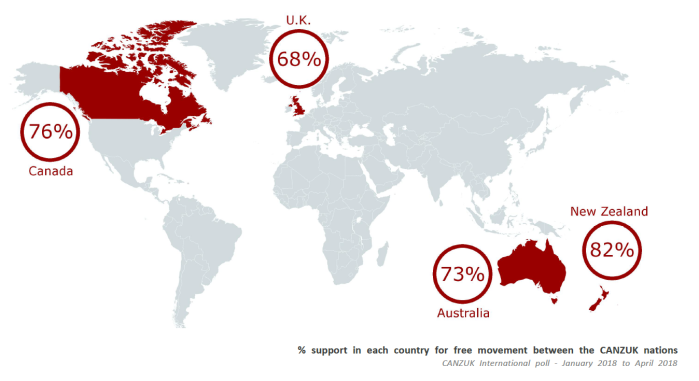 I wrote about the CANZUK proposal last year, when I observed (of the people-movement element of the proposal)

I’ve never been quite sure what to make of the CANZUK cause. I read a lot of imperial/Commonwealth history, and ideas like this sort of free movement area among the old ‘white Dominions’ are strikingly reminiscent of calls for an imperial federation or, much later, for imperial trade preferences (which became a big thing as the UK moved away from free trade itself). I could be a little provocative and suggest that is wasn’t entirely dissimilar to the sort of immigration policies New Zealand and Australia ran until a few decades ago, that could be – not entirely inaccurately – characterised as “white Australia” or “white New Zealand” policies.   …..even as an example of Commonwealth sentiment, not even South Africa – let alone Zimbabwe, Kenya or Namibia – appears in the CANZUK proposal.

Of course, there is a pretty straightforward answer. Almost invariably, public opinion in almost any country is going to be more open to large scale (or at least unrestricted) migration when it involves culturally similar countries than when it involves culturally dissimilar ones. In fact, there are good arguments that, if there are gains from immigration they could be greatest from people with similar backgrounds (and of course counter-arguments to that). Reframe the question as “would you support reciprocal work and residence rights among New Zealand, France, Belgium and Italy?”, and I suspect the support found in the CANZUK poll would drop pretty substantially – my pick would be something no higher than 50 per cent. Reframe it again to this time include Costa Rica, Iran, and Ecuador (let alone Bangladesh, India, and China – three very large, quite poor, countries) and people will start looking at you oddly, and the numbers will drop rapidly towards the total ACT Party vote (less than 1 per cent from memory).

And thus my own ambivalence about the CANZUK proposition. If I were a Canadian (of otherwise similar Anglo background to my own) I’d say yes. The historical and sentimental ties across these four countries – less so Canada – mean something to me. I’d probably even add the US into the mix. And across Australia, Canada, and the UK incomes and productivity levels are pretty similar – although the prediction would still presumably be that there would be an increased net flow of people from the UK to Australia (in particular) and Canada.

But I’m a New Zealander, and for us it would appear that there are two forces in conflict.  The ability to move freely to the UK or Canada might be a real gain to some New Zealanders –  as the ability to go to Australia has been over the decades –  but the quid pro quo could be that a lot more Brits could move here.

As it is, I’ve repeatedly noted that my economics of immigration argument doesn’t distinguish between whether the migrants come from Birmingham, Brisbane, Bangalore, Buenos Aires, or Beijing. We’ve made life tougher (poorer, less productive) for ourselves by the repeated waves of migrants since World War Two – in the early decades, predominantly from the UK, and in the last quarter century more evenly spread. Even though we are now materially poorer than the UK, enough people from the UK still regard New Zealand as attractive, that free movement – the CANZUK proposition – would probably see a big increase in the number of Brits moving here (big by our standards, not theirs). That might be good for them – that’s up to them – but wouldn’t be good for us. Perhaps the effect would be outweighed by more New Zealanders moving to the UK long-term, but I’d be surprised if that were so.

The CANZUK proposition is an interesting one, and is worth further debate. Apart from anything else, it might tease out what people think about nationhood, identity, and some of the non-economic factors around immigration.  ….at present public opinion appears to be strongly in favour, but on the specific question asked in isolation. It would be interesting to know, if at all, how responses would change if the option was free CANZUK movement on top of existing immigration policy, or (to the extent of the new CANZUK net flow) in partial substitution for existing immigration policy. The two might have quite different economic and social implications.

The CANZUK movement does appear to have an element about it – at least among some British advocates –  of an outward-oriented replacement for the EU.  But there are supporters elsewhere.   Most notably, the main opposition political party in Canada –  currently leading in the polls –  has CANZUK as one of its principal foreign policy platforms.     Closer to home, David Seymour has expressed support and –  somewhat to my surprise – I learned from the CANZUK website that Simon Bridges had done so too (pretty lukewarmly I suspect?).  The CANZUK people point out that even the Labour-New Zealand First coalition agreement has a provision that might be thought to have something to do with CANZUK (emphasis added).

What of the other dimensions of the proposal (free trade and foreign policy)?  My own position is that free trade is a good thing, and should try it.     We should remove all remaining tariffs, but not just on imports from Canada and the UK (we already have CER with Australia), but from anywhere and everywhere.  Doing so would benefit consumers.  And I’m sceptical of preferential trade agreements, and see little reason (sadly) to suppose that Canada (in particular) or the UK would be at all keen on open access for New Zealand agricultural exports.

And what of foreign policy?  I’d like to think that the four countries would stand together on many issues (bearing in mind that the North Atlantic and Arctic aren’t terribly important to New Zealand) but for now the four governments show little ability (interest?) in a common approach to, for example, the People’s Republic of China. In New Zealand’s case, not even any support when the PRC authorities abduct Canadia citizens.

Fairly or not, there is quite a sense about the CANZUK cause that is redolent of the 1950s.  I don’t mean that in a particularly negative sense –  there was, after all, a great deal to like about New Zealand’s relative economic performance in the 1950s, and about the still mostly quite close ties among the four countries, including the considerable freedom of movement (then again, Suez was hardly a great advert for NZ/Australia/UK foreign policy coordination).    As a citizen and voter, I feel a considerable affection for each of those countries –  probably more so than for any other countries, decent, worthy and prosperous as many of them are –  but it is the 2010s (almost the 2020s) not the 1950s.

And, at least from a New Zealand perspective, we’d be better off  –  economically, and probably on other dimensions – with materially fewer migrants, not with schemes that might only increase our average net non-citizen migrant flow (and reduce our ability to manage the flows, in a country where the housing and urban land market in particular is badly dysfunctional).