I wrote the other day about the woeful underperformance of our tradables sector, suggesting that it was past time for the Minister of Finance and the Secretary to the Treasury to actually engage with, and respond to, the underperformance.

Instead, this morning I stumbled on a speech given the other day by the Secretary to the Treasury that, in this regard, is not much better than just making stuff up.   The address was to an outfit called the New Zealand India Trade Alliance.   I’m sure there is lots of worthy detailed stuff in it, but my eye fell on this line

New Zealand is taking a more productive and effective path. We recognise the importance of continuing to focus on building a resilient workforce with flexible skills, and that we should expect and enable the economy to adapt to change as it happens.

One of the most positive changes for New Zealand has been digitalisation. It has thrown open opportunities to sell services and deliver them to other countries in a fraction of a second, in addition to selling goods delivered in days or weeks.

This shift in trade from physical goods to services is very evident in the trade between New Zealand and India.

It wasn’t a speech I’d normally have read, but this line –  the “shift in trade from physical goods to services” –  had been highlighted in a tweet retweeted by the (able and respected) MFAT Deputy Secretary responsible for trade negotiations etc.

And, as I noted in the post the other day, this is although we are heavily subsidising some parts of services exports –  the film industry notably, but also the export education sector (by bundling work rights, residence points etc together with the sale of education services, an issue that may have been of some salience for services exports to India).

How can we hope to see half-decent analysis and policy advice from the government’s (self-described) lead economic adviser, when the Secretary to the Treasury won’t even face basic facts?  There is nothing intrinsically wrong with goods exports –  in a successful economy we’d probably have more exports (and imports) of both goods and services – but there simply is no aggregate New Zealand shift from good exports to services occurring.

I’m not a mercantilist, and it is important to look at the imports side as well.  Perhaps the Secretary really had in mind imports of services?  But that doesn’t help either. 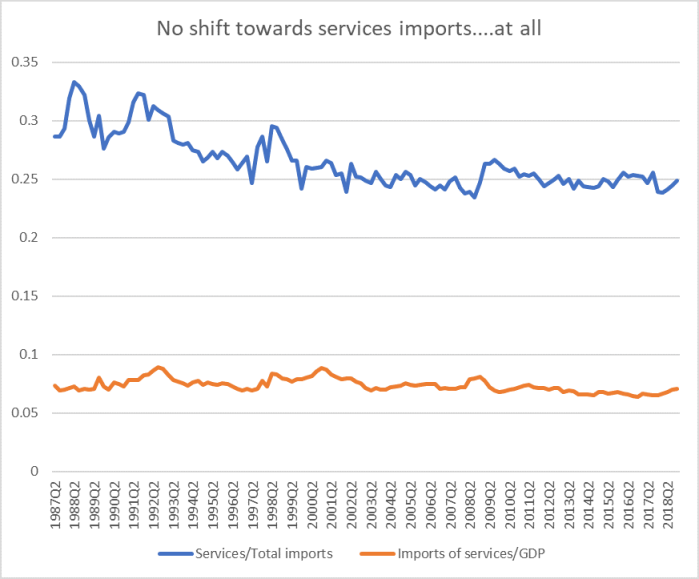 Almost 42 years, and no shift from physical imports to services imports at all.