The QV house prices indices for November for each of the territorial local authority areas were released last week.  Much of the headline coverage is around the fact that in the last year Auckland prices have barely changed, while those in places like Dunedin, Invercargill, Palmerston North and Whanganui have shown double-digit rates of increase.  Even Wellington prices rose 7.4 per cent –  something brought home to me when a house across our driveway went for $2 million recently (a very big house).

Cycles are often not in synch from place to place and I’ve sometimes found it an interesting reference point to look back and see how (real) house prices have changed since the peak of the previous surge upwards in house prices, in mid 2007.  That, of course, was just before the onset of the last recession in New Zealand.

Here is a chart showing (mostly) the cities

Auckland is, of course, still far worse –  total real increases (as well as levels) –  than any of the other cities.  But I was interested in a couple of things.

First over the (little more than a) decade. the increase in real house prices in Dunedin is well above that in many urban areas, and about the same as the increase in Wellington prices.  In the absence of population pressures, that Dunedin increase took me a bit by surprise.

And second was Christchurch.  There was a big rise in Christchurch prices a few years ago –  housing was in genuinely short supply following the earthquakes –  but looking back to before the recession and earthquake, and forward to today, Christchurch house prices haven’t increased in real terms very much at all.   Christchurch city has had less population growth than, say, Auckland or Wellington, but is still estimated to have 6 per cent more people than it had in 2007.

Much of the population growth (about 75 per cent of it) in greater Christchurch since the earthquakes has been in the Selwyn, in particular, and Waimakariri districts.  People sometimes talk about how responsive the two councils’ policies have been in facilitating this growth.  There is clearly something to that, but it is worth noting that neither locality seems to offer anything like the sort of easy ability to build and develop land that we can observe in many fast-growing places in the United States.  Real house prices in Selwyn, for example, have risen by about 20 per cent in the last decade.  And there is are enormous amounts of flat land in Selwyn.

And my other chart is of the TLAs at the bottom of the scale –  the places where real house prices are still lower than they were at the peak of the boom in 2007. 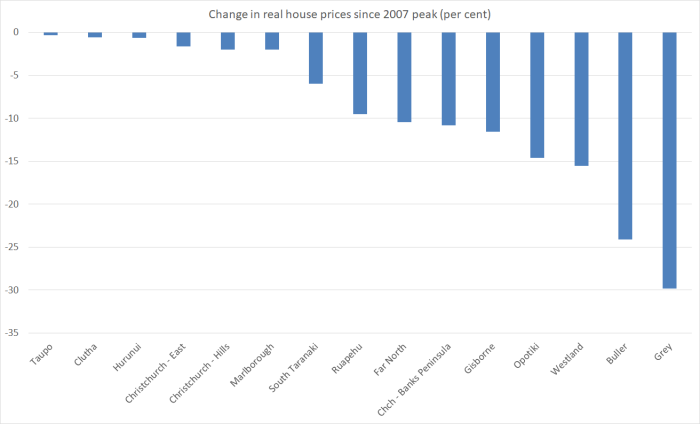 Not, it seems, because (say) land use laws were freed up and the cost of bringing new houses to market has fallen.  In some of these places, prices are probably now below replacement cost (at least on existing land use regulation).    Most, if not all, look like the sorts of places that would benefit from the sort of much lower real exchange rate that I remain convinced has to be a part of any successful economic adjustment in New Zealand –  not that either main party seems to have any interest in effecting such a transition.

It is a sad and shameful record for our politicians.  One neither hears them talking of a goal to get house prices back down again, nor sees them implementing or advocating policies that might make a credible long-run difference.  I guess it won’t greatly matter for the kids of people like the Prime Minister or the Leader of Opposition, but what about the kids of the rest of us? It saddens me to listen to my kids talking about how difficult they think it will be to ever afford a house (in places with decent jobs), but it angers me how (practically) indifferent our political leaders –  central and local – seem.

17 thoughts on “Where have real house prices risen and fallen?”