The second half of the Grant Robertson/Steven Joyce debate on Sunday was around things to do with overall economic performance and management.

On one thing they agreed: Winston Peters’ proposal that New Zealand should adopt a Singapore-style approach to monetary policy and the exchange rate isn’t an option for New Zealand.  I agree with them, and explained why in a post a few months ago.

Grant Robertson reminded viewers that John Key had promised to close the gaps between New Zealand incomes and productivity and those in Australia, noting that no progress has actually been made.   Steven Joyce likes to push-back by citing numbers that suggest that after-tax real wages have been rising faster here than in Australia.    When I’ve looked at that claim previously, a lot appeared to depend on which exchange rate one used to convert wages in the two countries into a common currency.  Using PPP exchange rates, the gap has actually widened a bit further.    Comparing wage series across countries isn’t that easy –  countries measure things differently, and things that are effectively part of remuneration (eg employer superannuation contributions) often aren’t included.

Personally, I prefer to focus on economywide measures, which are compiled in a consistent manner across countries.   Here is real GDP per capita for the two countries, indexed to 2007q4, just before the global downturn/recession began. 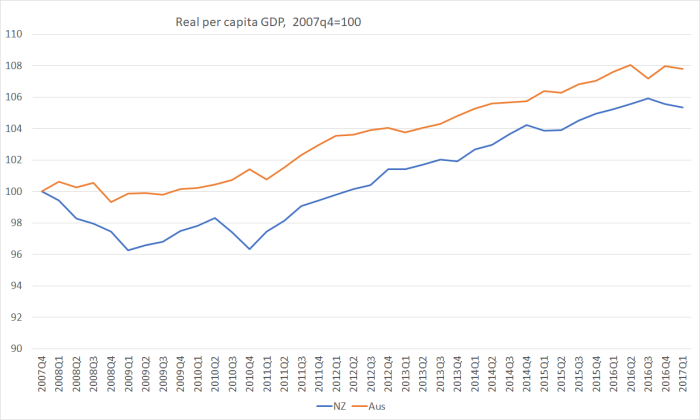 I could have started the chart a few quarters later, to coincide with the change of government.  Either way, no progress at all has been made in closing the gap to Australia.

Best summary?  We haven’t lost much ground against Australia when we focus on GDP per capita, but since relative productivity has dropped away badly we’ve only maintained even that mediocre real GDP per capita record by working even longer hours on average.

But if the government’s record is pretty poor, it isn’t clear that the Labour Party is offering anything much different.   It is all very well to criticise the current government for making no progress in closing the gaps, but Labour doesn’t even seem to be talking about doing so.    Robertson did highlight the four or five years now of zero productivity growth, and talked of needing a plan for something different.  But it wasn’t obvious from anything he said, or anything I’ve read, quite what the plan is, that might be equal to the challenge.   There is plenty of talk of lifting skills –  but the OECD data already suggest New Zealand skills levels are among the very highest among advanced countries.    There is talk of a tax working group, with an apparent presumption that that is likely to lead to a capital gains tax.  And there is talk of R&D tax credits.  But I doubt anyone –  even those who support such measures – believes that they are remotely enough to make the sort of difference closing the gaps to Australia might involve.

Of course, the National Party’s position seems no better.  The Minister’s rhetoric is that people are voting with their feet and realising that the jobs and incomes are now here.  Sure, the annual outflow of New Zealanders to Australia has dropped, but it is still an outflow each and every year.   And no one seriously thinks other than that average incomes in Australia remain much higher than those here.  But it is tougher to get established in Australia at present –  that’s a bad thing for New Zealanders, not a good one.

Steven Joyce was touting the success of certain subsets of firms exporting from New Zealand.  It is perhaps easy to forget that the government has long had a goal of substantially increasing the export share of GDP (and, presumably, the import share, since we export to import –  sell stuff to other people so that we can consume ourselves).

It is easy for one’s eye to go to those peaks in 2000 –  at a time when the exchange rate had fallen sharply – but even much more recently the trends haven’t been favourable.  Even the vaunted services exports are lower now as a share of GDP than they were 10 years ago, or than when the government came to power.   The Minister talked of “high-tech value-added manufacturing” as the future, but then overall goods exports are lower as a share of GDP now than at any time in the last 30 years.

And for all the talk of services exports, here are exports of services as a per cent of GDP for New Zealand and the other small OECD countries.

Grant Robertson was prepared to go as far as to say that the exchange rate is “too high”.  Artificially lowering it wasn’t, we were told, the answer (and I’d agree, if by that he meant eg a Singapore-style monetary policy).  But there was no hint of how Labour thought a lower exchange rate might be brought about in a more sustainable manner.

New Zealand has faced some obstacles to growing the tradables sector of our economy in the last decade.  The earthquakes meant that real resources had to be used for other things –  repair and rebuild –  and other activities had to make room.  Policymakers have known this since the very days after the earthquakes occurrred.  The substantial amount of offshore reinsurance just reinforced the way in which the earthquakes represented a large shock skewing the economy for a time more towards the non-tradables sectors.

But what was extraordinary is that the same policymakers allowed, and cheered on, another even bigger non-tradables-skewing shock.

Here is a chart showing cumulative population growth since National took office, and the cumulative inflow of non-citizens (the PLT data, with all their pitfalls).

We’ve had a 510000 increase in population over the term of this government, 421000 of which is accounted for by the net inflow of non-citizens.    The fertility and migration choices of New Zealanders would, all else equal, have given us only around 2 per cent population growth over the eight and half years, putting a great deal less pressure on

Remember that each new arrival need a lot more physical capital stock than is accounted for by the labour those people supply early on.   Policy has been deliberately skewing our economy away from the tradables sector.    We’ve had a net non-citizen migration inflow of almost exactly 300000 people in just the last five years.   With no productivity growth at all in that time, and an export (and import) sector shrinking as a share of GDP, and business investment pretty subdued too, one might reasonably ask ‘to what end?’ for New Zealanders.

We should be left wondering why, if we vote for them, either main party expects anything different than the mediocre economic performance of the last few years.   Gareth Morgan criticised Labour’s apparent lack of much policy substance  as “putting lipstick on a pig”.  It isn’t obvious that the National Party is even offering the lipstick.

And all this is without even repeating for the umpteenth time that the unemployment rate now is still higher than it was at any time in the last five years of the previous Labour government, at a time when demographics appear to be lowering the natural rate of unemployment.  Or the underutilisation rate of almost 12 per cent.      We should be able to do a great deal better for New Zealanders.